Garth Barfoot tackled the Auckland Waterfront Half Marathon earlier this month and is aiming to become one of the oldest Aucklanders to finish the Rotorua Marathon.

Patience has been a virtue for 84-year-old Garth Barfoot, who is all set to make his 17th appearance in the Rotorua Marathon next month.

Originally entered for the 2020 Rotorua Marathon, health problems denied him the opportunity to compete and last year he underwent a heart valve operation to fix an artery blockage.

Hoping to compete in last September’s rescheduled Rotorua Marathon, the former real estate boss of Barfoot & Thompson fame was again denied the opportunity as Aucklanders could not take part due to Covid restrictions.

However, the octogenarian is now fighting fit and relishing the prospect of finally competing in Rotorua next month.

“It has been a long wait but I’m looking forward to giving the race a go,” he says.

“I was told if I didn’t have the heart valve fitted I would only have two years to live so it was an important procedure.

“I’ve then had to wait a while longer, although age has started to catch up with me. I ran six hours 12 minutes three years ago in my last appearance and this time around I’d be pleased to do eight hours 12 minutes!”

Garth was introduced to running in his mid-50s and made his marathon debut at the 1990 Rotorua Marathon. 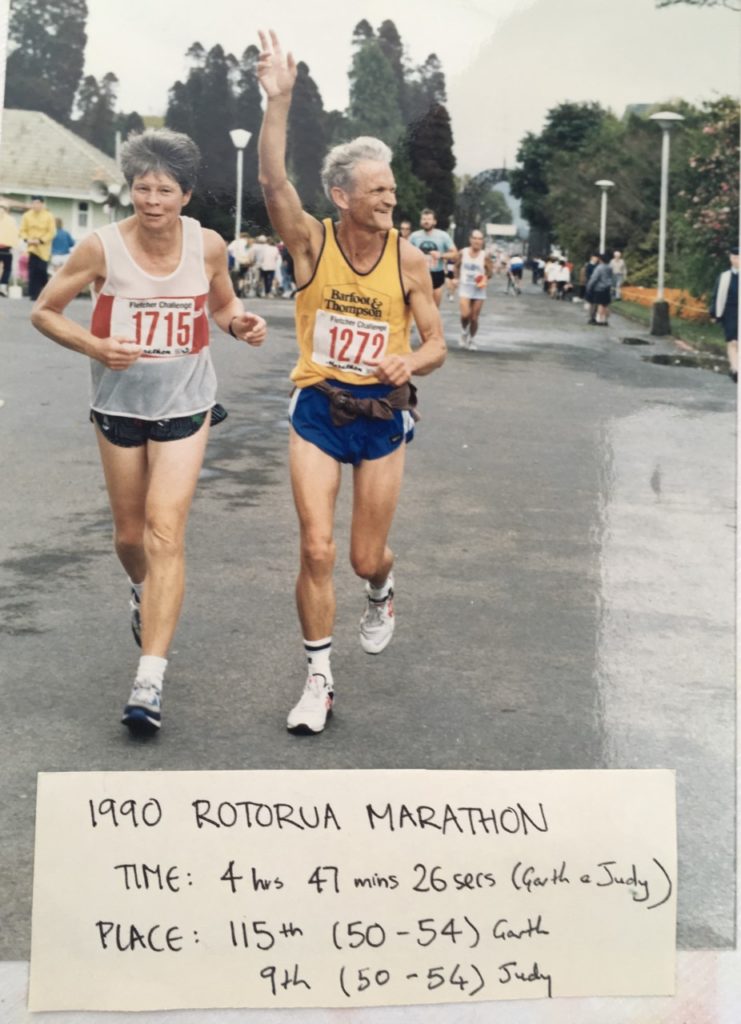 He has since gone on to be become a Survivors’ Club member (in which a runner needs to complete 15 Rotorua Marathons) and has also completed ten NZ Ironman triathlons.

He describes discovering his passion for endurance sport at a relatively advanced age as “a novelty” and recalls the buzz of reading for the first time in the NZ Herald he had placed top three in his age-group for a triathlon.

“I spent my whole life with my name beaming down in big capital letters in those Barfoot & Thompson ads but to see your name in small print, well, money can’t buy that,” he says.

His health and age have seen Garth regress in terms of his speed in more recent times.

Earlier this month, he completed the Auckland Waterfront Half Marathon in 3:48 so is realistic about what he can achieve in Rotorua this year.

“Using my coaches’ rule of thumb of ‘your marathon time is twice your half marathon time plus 25 per cent’, this makes 8:32 as my predicted marathon time. Last year’s slowest time in Rotorua was 8:29, so I still have some work to do and there are hills in Rotorua, real hills!

“But the race is still special to me because it is where I ran my first marathon. It will still be quite a thing if I manage to complete the race and I will probably be the oldest Auckander ever to finish the Rotorua Marathon.”

Why not join Garth and take on the challenge of the Rotorua Marathon on 8 May?