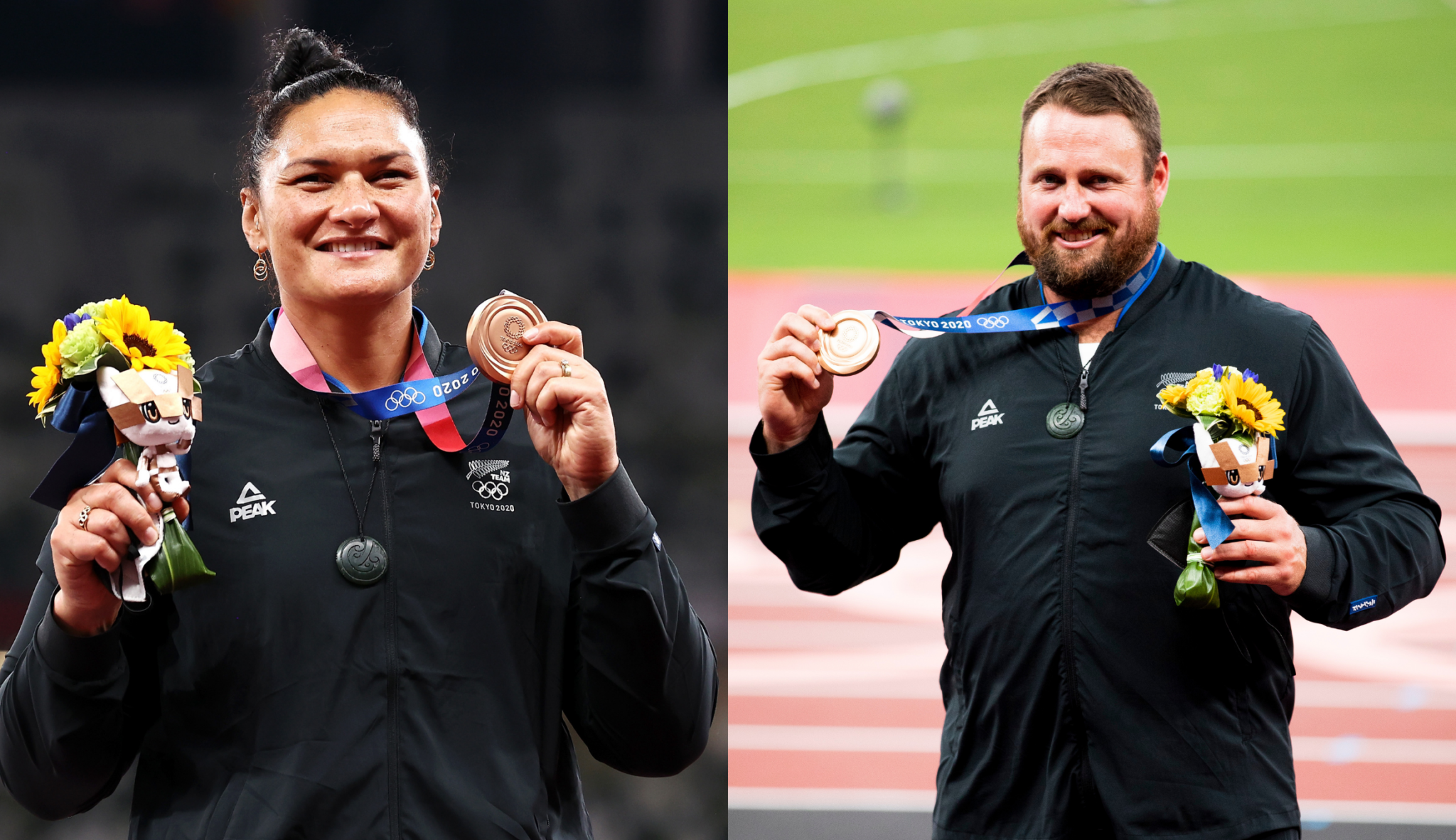 The 13-strong New Zealand team delivered an overall performance they can take immense pride in at the Tokyo 2020 Olympic Games – snaring a pair of emotional shot put bronze medals and setting a blizzard of season’s bests and couple of personal best displays.

Once again, the throwers took centre stage led by the incomparable Dame Valerie Adams, who secured a fourth successive Olympic shot medal (to add to her two Olympic golds and one silver medal) with a best of 19.62m earning her bronze.

The mum-of-two, who proudly clutched a photo of her two children – Kimoana and Kepaleli – said: “It feels better than winning a gold medal. I’ve won a gold medal twice, this is so much more special in a very different way. I’m here as a mum first and then an athlete, so having to juggle that in the last five years hasn’t been easy, but we know that with a good support team around me we can make it happen.”

In the men’s shot put, Tom Walsh added a second successive Olympic bronze medal – achieving his longest throw since the 2019 World Championships with a toss of 22.47m in round six.

Given the work he has put in to rediscover his best form over the past 18 months and the quality of the opposition – defending champion and world record-holder Ryan Crouser of the USA struck gold with a mighty Olympic record of 23.30m– the bronze was rich reward for the 29-year-old South Canterbury AC thrower.

In another unusual fact, it was the first time in history that an individual podium at two consecutive Olympics has been the three same people, in the same order (Joe Kovacs of the USA won silver in Rio 2016 and Tokyo 2020).

“I definitely wanted a different colour medal, there’s no doubt about that, but I gave myself the best chance out there today to throw far, and almost got it,” said Tom.

“And that’s all I can ask for right, sometimes you just don’t quite put it together the way you’d like to, and you know that’s how good men’s shot put is right now, you’ve gotta nail it to win.”

Behind Dame Valerie, the future of New Zealand women’s shot put looks in great hands as Maddison Wesche produced the performance of life to finish sixth in the final.

The 22-year-old Aucklander, who represents Waitakere AC, excelled in qualification to hurl the 4kg shot out to a lifetime best of 18.65m to advance 11th into the medal round.

Then in stifling condition inside the Olympic Stadium, Maddi stepped up again to add a further 33cm to her lifetime best with a monster 18.98m toss – earning her an outstanding spot in the top half dozen finishers.

New Zealand also boasted a second finalist in the men’s shot put with Jacko Gill (Takapuna AC) repeating his ninth place finish from Rio 2016 – with a best of 20.71m.

Hamilton-based Julia Ratcliffe performed with distinction to place ninth in the women’s hammer with a best of 72.69m. In qualification the 28-year-old advanced to the final sixth with a best of 73.20m – just 35cm shy of her lifetime best.

Some 800km north on the steaming streets of Sapporo, Quentin Rew (Wellington Harrier AC) – competing at his third Olympic Games – produced a herculean effort to place 16th in the 50km race walk in 3:57:33.

In the men’s marathon, which also took place on Japan northernmost island of Hokkaido, Zane Robertson was in touch with the lead pack for the first two-thirds of the race before dropping back to place a brave 36th in 2:17:04. In energy-sapping heat and humidity, the Hamilton-raised Ethiopian-based athlete can be proud of his efforts. London-based but Auckland raised Malcolm Hicks finished 64th in 2:23:12.

As a long-distance specialist, New Zealand’s lone female track runner Camille Buscomb also had to endure brutally tough conditions. In the 5000m the Hamilton City Hawks athlete placed 14th in her heat (15:14.39). Later in the programme, the 31-year-old Hamilton City Hawks athlete ran a highly-respectable 32:10.49 for 19th in the 10,000m – the fourth best performance of her career over the 25-lap distance.

In the women’s hammer, national record-holder Lauren Bruce (South Canterbury) placed 23rd in qualification with a best of 67.71m. Sam Tanner (Athletics Tauranga) placed ninth in his heat of the men’s 1500m in a time of 3:43.22.

Athletics NZ CEO Pete Pfitzinger said of the performance of the New Zealand team: “After waiting an extra year for the Games to begin, the Tokyo Olympics exceeded expectations on many fronts. The New Zealand team had its best performance ever and the Japanese hosts provided excellent venues and a safe environment.

“At Athletics NZ, we are very proud of our team’s performance and how each athlete represented themselves on the world stage. With much uncertainty leading up to the Games, these Olympics brought out even more emotion than previous Games and all of our athletes put their hearts and souls into their performances.

“The build-up was less than ideal for most athletes, with Covid-19 travel restrictions limiting access to world class competitions, and the Games protocols required many compromises. Each athlete and coach found a way to be ready when it mattered most. Congratulations to the coaches for adapting to the one-year delay and the difficult environment. The hot and humid conditions made the longer distances extremely tough, and Camille, Quentin, Zane and Malcolm, in particular, persevered through strength-sapping conditions to represent New Zealand with pride.

“The support team behind the team, led by Scott Goodman and Kat Austin, had a greatly increased workload over the past year in meeting the requirements to allow international travel and provide a safe environment for our athletes to train and compete. The team’s success is a fitting reward for the many hours of planning and documentation to allow international travel and meet the required protocols for the Saga pre-camp and the Tokyo Olympics. Congratulations and well done to all.”

A big thank you to all of the support staff who helped out in Tokyo and Sapporo:

A couple of special mentions to our photographer in Tokyo, Alisha Lovrich, for capturing all the action inside the Olympic Stadium, and to Trevor Spittle, the sole New Zealand official in Tokyo for his role as International Technical Official (Field Referee) during the athletics programme.