Barber hitting the road on return to action 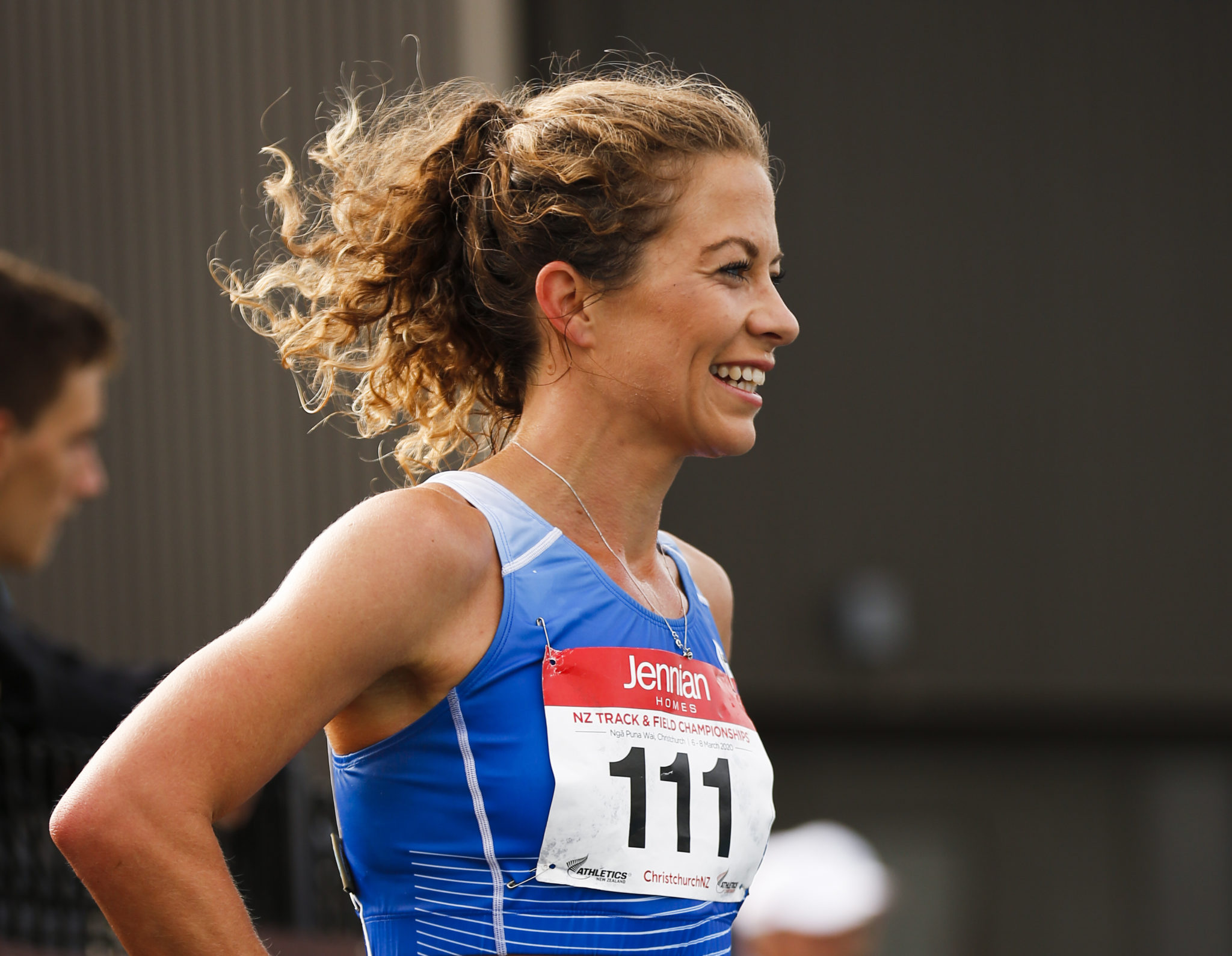 For her next competitive outing, Commonwealth Games 20km race walking silver medallist Alana Barber is targeting the New Zealand Road Race Championships in Auckland on 7 November. Steve Landells caught up with the 33-year-old Aucklander to talk lockdown, coaching kids and how to cope with being separated from your partner and coach for more than 12 months.

Since Alana Barber stepped off the track having pocketed national 3000m and 10,000m race walk titles in Christchurch in March, it is hard to comprehend how much the world has changed.

Back then Alana was all smiles. She talked hopefully of heading to Japan for a crack at the Olympic 20km race walk qualification mark of 1:31:00. She was looking forward to reconnecting with her German-based Polish boyfriend and coach, Damian Blocki, during a training stint in Europe fuelled by the motivation of targeting a second Olympic Games.

Yet, within two weeks of the New Zealand Track and Field Championships, the country was in full lockdown in response to the global pandemic. Everyone had to adapt to the rapidly changing world. It was not easy, particularly for a high performance athlete whose world had been turned upside down.

“I think the hardest part was the uncertainty,” she explains.

“At that stage, they hadn’t made a decision on whether the Olympics would go ahead. Was I still training for an Olympics or not? That was very unsettling.”

When a decision was finally made to postpone the Olympics, it brought some clarity to Alana. But the swathe of negative media stories about the pandemic brought into question whether the rescheduled Tokyo Games in 2021 would go ahead and this forced the two-time World Championship athlete into a period of self-reflection.

“I started to question many things and I realised I needed to step away from the things I couldn’t control,” she says.

“I had to focus less on whether the Olympics would go ahead, and more about whether I still enjoy race walking. And I came to the conclusion that I did. I still wanted to accomplish goals in the sport. I had the desire to not only appear at an Olympic Games but to set PBs and go faster than ever.”

During the first lockdown, to help mentally cope with the uncertainty she took a one-month break from structured training and devoted her energies into other areas of her life.

She instead focused more time on coaching a group of young Auckland-based race walkers – a pursuit she has found to be mutually beneficial.

“I realised it was not just me struggling for motivation during lockdown but other athletes were going through this too. Writing training programmes for them acted as a motivation for them but it also helped motivate me too.”

The global pandemic has created other challenges for the six-time national senior road walking champion. She has been apart from her boyfriend and coach for more than a year since the pre-event training camp in Cyprus prior to the 2019 World Championships in Doha.

Alana intended to fly to Europe to see Damian – who represented Poland in the 20km race walk at the 2017 World Championships – shortly after the 2020 domestic summer season ended. But Covid put an abrupt end to such travel plans and this has, understandably, made life challenging, both on a personal and professional level for the Manurewa-based athlete.

“Video calling has definitely got us through the past year or so and, if anything, it has strengthened our relationship,” she says.

“As we are not physically close to one another, it makes the one-hour video call every day really important. When we talk to each other nothing else really matters, so we just try to prioritise each other.

“With so much uncertainty during the first lockdown we decided to prioritise our relationship rather than the coach-athlete side of things and I took a month off training. Now we are back to playing both roles.”

Since returning to training in late-April, she has undergone several cycles. For a period, she was forced to train on a 3km loop on the footpaths near her home in Manurewa.

“An eye-opener for neighbours watching me waddle along,” she says with a laugh.

When restrictions eased, this allowed Alana to carry more of her training on the country lanes of Clevedon – a 15-minute drive from home.

Meanwhile, in recent months she has taken up a part-time role as a teaching aid in the learning diversity department at Waiheke Island High School.

The position has aided her financially but also offered another positive distraction. Living on the family bach on the island, she has discovered a flat 2.5km loop along the Esplanade, where she carries out much of her training.

In early October, Alana made her long-awaited return to competition over 10km at the Auckland Championships. Excited to be back competing for the first time in six months, she recorded a time of 49:37.54 to win – well down on her personal best of 44:57.2, which was recorded in Melbourne in January.

Nonetheless, she was realistic about what she could achieve that day and was satisfied with her efforts.

“I’d just finished a solid base of winter training, which I hadn’t been able to do before because I’d typically race throughout the whole year,” she says.

“Knowing I’d just come off a base phase, I didn’t have high expectations but I need a race to remind myself how to walk fast again. It was also nice to see many of the athletes I coach set PBs. I’m at the stage of my career where If I set one PB a year that is something to be celebrated. But for them it is happening more regularly – it was a nice reminder of the excitement of racing.”

The next phase of her race development will come at Bruce Pulman Park in her native South Auckland for the New Zealand Road Race Championships, where she hopes to add a third national road crown to the titles she snared in 2014 and 2018.

Given her current shape, she is realistic about what she can achieve but acknowledges the competition will act as an important stepping stone in her plans for 2021.

“This is not a major target race of mine, but I hope it will act as a good reminder of what it is like to race over the 20km distance.”

In the longer term, her next ‘target’ race will be a 20km specially organised by Athletics NZ, which will be held on the morning of the Potts Classic in Hastings on 23 January. With the possibility of New Zealand still under travel restrictions because of the global pandemic, Alana will use the race as an opportunity to target the tough Olympic qualification mark of 1:31:00 – which stands some 32 seconds quicker than her national record for the distance, set in Taicang two years ago.

“I’m very lucky Athletics New Zealand have put this race on,” she says.

“I have three months of quality training to put in before then and, although it will be hard racing for a target time on my own, I’m pleased to be given the opportunity.”