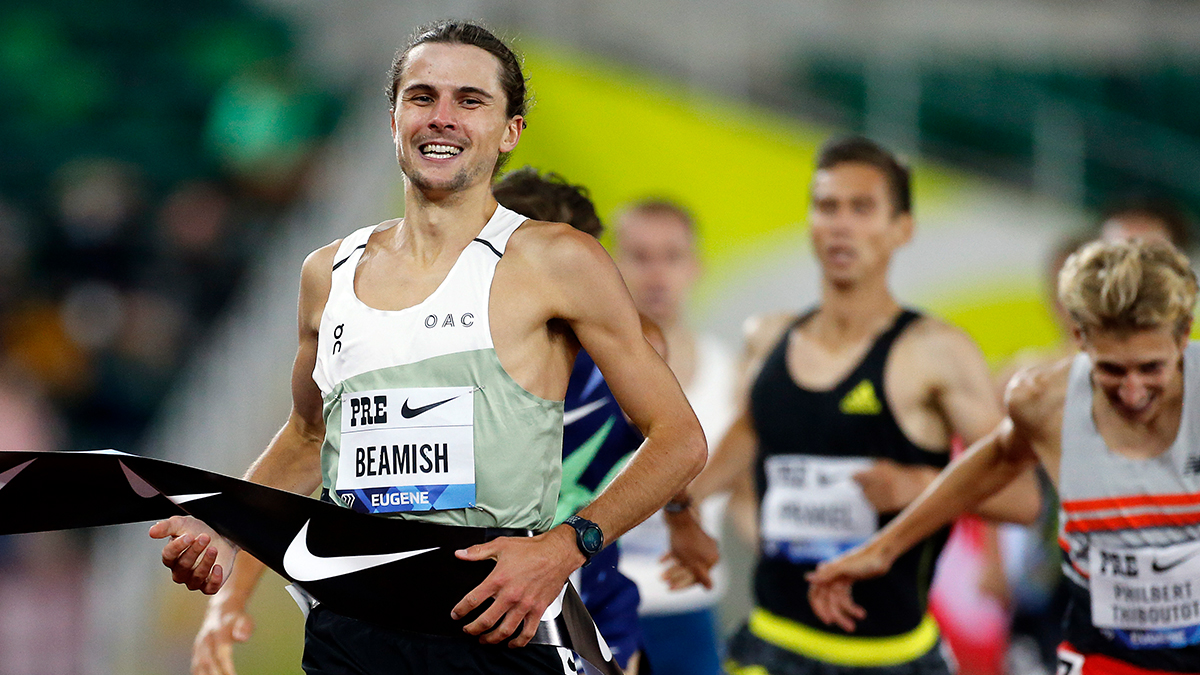 Over the past 12 months or so Geordie Beamish has been one of the breakout stars in New Zealand athletics. Steve Landells chatted to the US-based athlete who over the past two months has set national indoor 3000m and 5000m records.

An awful lot has happened in the life of Geordie Beamish since the last time we caught up with him in Athletics in Action.

It was back in May 2020 and the relatively early days of the pandemic days when we chatted to several US-based Kiwi athletes including Geordie to check in on how they were coping with the rapidly changing world.

At that point Geordie was undecided on his future. After five years at Northern Arizona University he had an option of one more year of college eligibility but he also mulled over the possibility of turning professional.

As keen observers of the sport will know, the Hawke’s Bay raised athlete has since taken the professional route with stunning success.

In July 2020 he signed for the On Running team in Boulder, Colorado and since then his performances have slowly but impressively improved leading national indoor 3000m and 5000m records – the latter meeting the qualification standard for both Commonwealth Games and World Championships.

So, heading back to 2020 why did he make that step to join On Running?

“I’d spent five years at college, so I was ready for a change,” explains Geordie.

“On Running were making a name for themselves and giving good opportunities to young, promising athletes coming out of college. It was an opportunity too good to pass up.

“They were what I was looking for in a group of young athletes and I got the chance to work with head coach (Dathan Ritzenhein) I liked, a brand I liked, plus Boulder is one of the few places in America I was prepared to live. Everything lined up.

“I got a really good vibe from Dathan following our early conversations. I felt confident working with him going forward and one-and-a-half years later I am happy with the decision.”

Training with a group of nine athletes (five men and four women) from a range of countries including Australia’s Olympic 1500m finalist Ollie Hoare has provided the perfect training environment for Geordie.

With access to a gym facility for the team which includes weights and treadmills “everything you would need as part of a pro running group” he lives with three other members of the team including the Australian athlete Hoare.

But while he describes life in the house as “fun” and he enjoys “good banter” with the Aussies he believes training with quality athletes such as Hoare – who won the iconic Wanamaker mile at the Millrose Game in a Australian record 3:50.13 – as hugely advantageous.

“Oli is a phenomenal training partner and probably one of the most consistent runners I’ve ever met,” he explains. “We also have guys like Jo Klecker who is a 27:23 10,000m runner – we have a great range of speed and strength in the group. It sets the bar pretty high.”

Geordie admits there is no “crazy secrets” to his success describing his average workload of 65 miles per week as “fairly standard” with one notable difference. Past injury issues have seen Geordie adopt an approach of five days of running per week and two days off, which usually entails either workouts on an elliptical cross training machine or aqua jogging.

“We do this, so I manage the workload and it has definitely helped because I’ve not had any issues since April last year,” he explains. “Although I do make sure on my five running days a week these are big days.”

Another element to his success has been the key role played by his coach, Dathan Ritzenhein, a three-time Olympian and former US record-holder for 5000m. ‘Ritz’ – as he is known – offers vast experience from his time as an elite athlete, but Geordie insists he has many other qualities too.

“Dathan is super in tune with what an athlete needs to perform at the highest level and is very empathetic when an athlete is struggling with injury,” he adds. “He himself had many injuries through his career but he knew what it took to run well. He’s just a genuinely nice guy who really cares about us as people as well as athletes.”

During his first six months or so with the team, Geordie principally spent re-habbing from stress reaction injuries in his lower leg. From October 2020 he then headed back home for three months as he waited on obtaining a US visa. In January last year he made a couple of appearances here in New Zealand; winning national bronze medals with PB times of 3:59.13 for the mile and 7:55.09 for 3000m.

“It was fun racing at home again and given the circumstances (of injury for much of 2020) it was fine because I hadn’t raced for pretty much the whole year, and I had missed six months of training. Bronze medals were solid, particularly bearing in mind Sam Tanner was in outstanding form at that time.”

Since heading back to the US in early 2021 the former Whanganui Collegiate student has piece by piece, step by step made gradual improvements.

During the Northern Hemisphere summer he set a 1500m PB of 3:37.57 in Portland, Oregon. But it was later in the summer season when Geordie really started to catch fire. In August he ran a big new mile PB of 3:54.92 in Raleigh before he claimed a memorable victory in the international mile race at the Prefontaine Classic Diamond League meet by trimming a further 0.06 from his best time. He climaxed his season in Europe by claiming a 12-and-a-second 3000m PB in Rovereto, Italy recording 7:42.39 for third.

“It was a late bloom of a season for me,” he says. “I didn’t qualify for the Olympics but found some fitness late summer. I ran a couple of good back-to-back miles.”

That victory in Prefontaine – which was surprisingly his first appearance at the fabled Hayward Field venue for the 2022 World Championships – became a YouTube smash after he caught and passed American Craig Engels in the final strides to win after the American appeared to be celebrating his win as he entered the home straight.

“I think to give him (Engels) credit, he was waving to the crowd to have some fun and get them cheering, I’m not sure he was celebrating the victory. I came from a long way back, but I was confident in the last 100m I would catch him.

“To win that race was a validation of training and how things were going.”

Since returning to training he has continued to make gains. Uninjured his strength has developed, although even he was taken aback to run a New Zealand Indoor 5000m record of 13:12.53 to climb to second on the all-time New Zealand 5000m lists behind Adrian Blincoe in Boston in December. A performance which significantly dipped below the qualification standards for World Championships and Commonwealth Games.

“Oli and I had been training well and we thought a good 5K might be on the cards, and we went in thinking 13:20 would be a great day,” explains Geordie. “We had some really good pacing from our team-mate Joe Klecker and we able to squeeze out the last 2k. The last few laps had some people yelling at me telling me the world standard was going to be on the cards and it was great to have secured that in December which means I no longer have to worry about it.”

More recently, Geordie once again impressed at the iconic Millrose Games in New York. In an historic night for Kiwi athletics after Nick Willis became the first man in history to run sub-four-minute miles in 20 successive years, the young pretender claimed a national indoor 3000m record of 7:39:50 to win courtesy of a vicious kick finish.

At the Armory track Geordie took some big scalps including beating Olympic 1500m sixth placer Cole Hocker of the USA – another notch on the belt of the 25-year-old Kiwi.

“I was pretty stoked with that one,” says Geordie. “Being able to go to Millrose – one of the most well-known indoor track meets in the world with its incredible history – and race well there was a definite step in the right direction.”

Geordie has since notched a handy indoor mile clocking of 3:55.14 for fourth in Staten Island and is next targeting a crack at the 3000m at the World Indoor Championships in Belgrade (Mar 18-20).

Subject to selection, the Kiwi will be making his long-awaited debut in the Black Singlet and he is relishing the prospect of competing in Serbia.

“I definitely think making the final is realistic, he says. “With the way I closed the final few laps at Millrose I’d like to be competitive. But I’m likely up against Ethiopians who have run mid 7:20s (for 3000m) and that seems a long way off, but in a championship race you never know.”