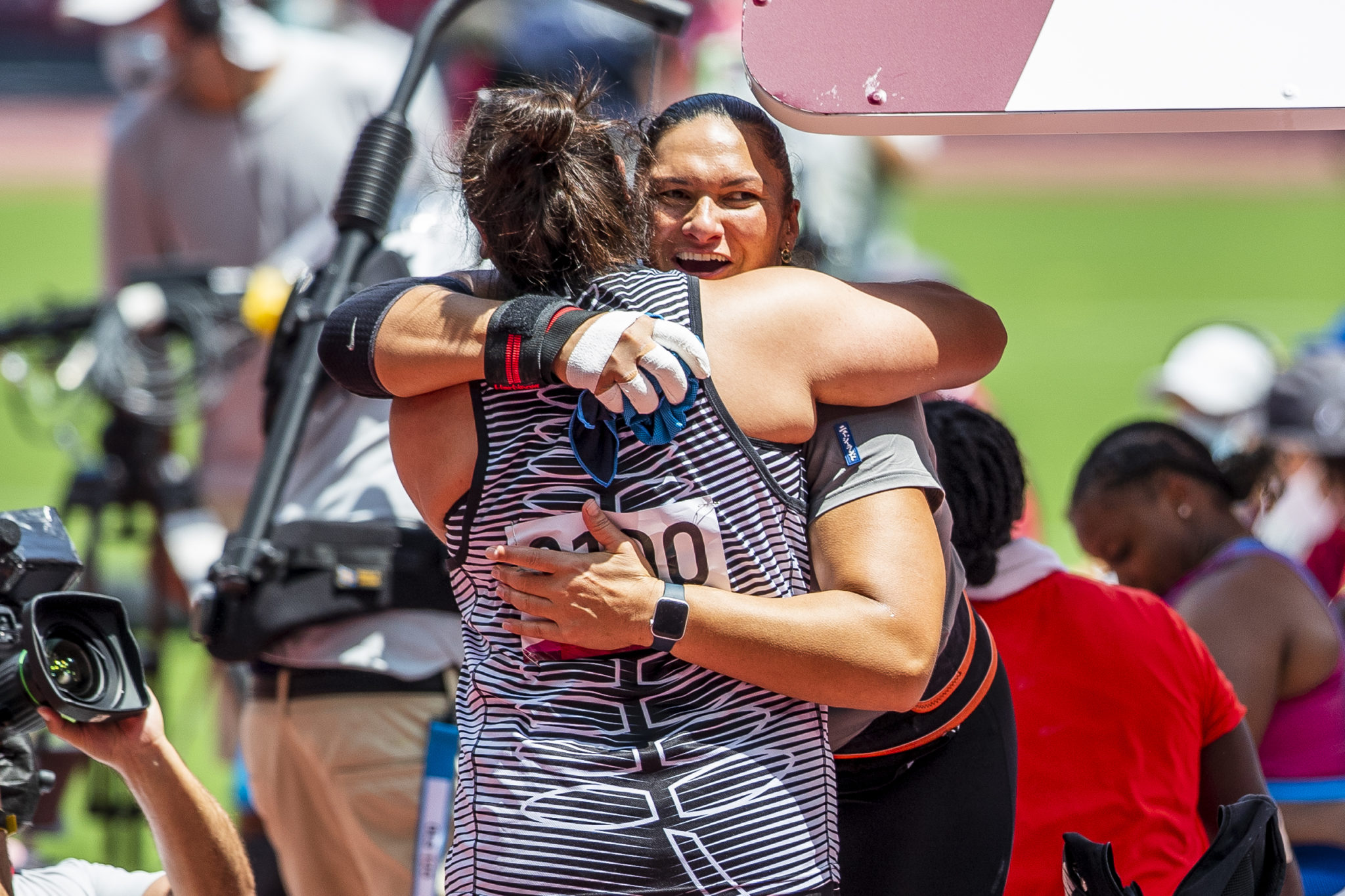 Dame Valerie Adams and Maddison Wesche celebrate at the the of the Olympic shot put final (Photo Credit: Alisha Lovrich)

Dame Valerie claimed her fourth medal in the event, and first Olympic shot put bronze, after her third round effort of 19.62m was enough to hold her in bronze medal position through the final throws. The emotion of the moment was clear for the five-time Olympian, who held a photo of her children Kimoana and Kepaleli as she spoke with media following the event:

“From the last Olympics to these Olympics I’ve had two children, two and three years old, so I am very ecstatic for the opportunity to be here. Throughout the competition I kept looking up to the empty stands and I kept imagining them here, and all I wanted to do was make them proud today. They won’t know what the hell I’ve just done, or what this means, but I hope one day they can look back and know that they were part of this story.

“It feels better than winning a gold medal. I’ve won a gold medal twice, this is so much more special in a very different way. I’m here as a Mum first and then an athlete, so having to juggle that in the last five years hasn’t been easy, but we know that with a good support team around me we can make it happen.

“Being able to achieve something like this as a Mum of one, let alone a Mum of two, is phenomenal, so it just goes to show just how strong females athletes are, if they want to have the opportunity to go away and have children, they can still come back and be at the top of their game. It’s not impossible, I’m a testament to that today, so I just hope to continue to inspire female athletes that by the time they get to the end of their career, I don’t want them to have any regrets and not taking the time to have children. I’ve had both my kids via IVF, again another journey in itself that hasn’t been very easy, but they’re my miracle babies and I absolutely have no regrets.

“I’ve been away for two months already. Now I move to the Paralympics, I coach my younger sister Lisa who will be competing at her first Paralympic Games so I’m going to go into camp with her. I really want to be there for her and making sure that she’s as prepared as possible for these Paralympic Games. And then we will go home once the job is done.”

The youngest in the field, Maddison looked like she enjoyed every second of the final, with a huge smile on her face from the moment she entered the Tokyo Olympic Stadium, through to her sixth round throw.

Maddison was on fire throughout the final and stepped into the circle with sunnies on for her third round throw, a relaxed approach that seemed to do the trick with Maddison throwing a new personal best of 18.98m and securing her place in the top eight.

Maddison said it was pretty cool to compete alongside Dame Valerie Adams and witness her medal winning performance: “You know, you don’t see these moments in real life, especially during a pandemic, but to be here and witness that it’s something special.”