Cameron proves the king of the mountains 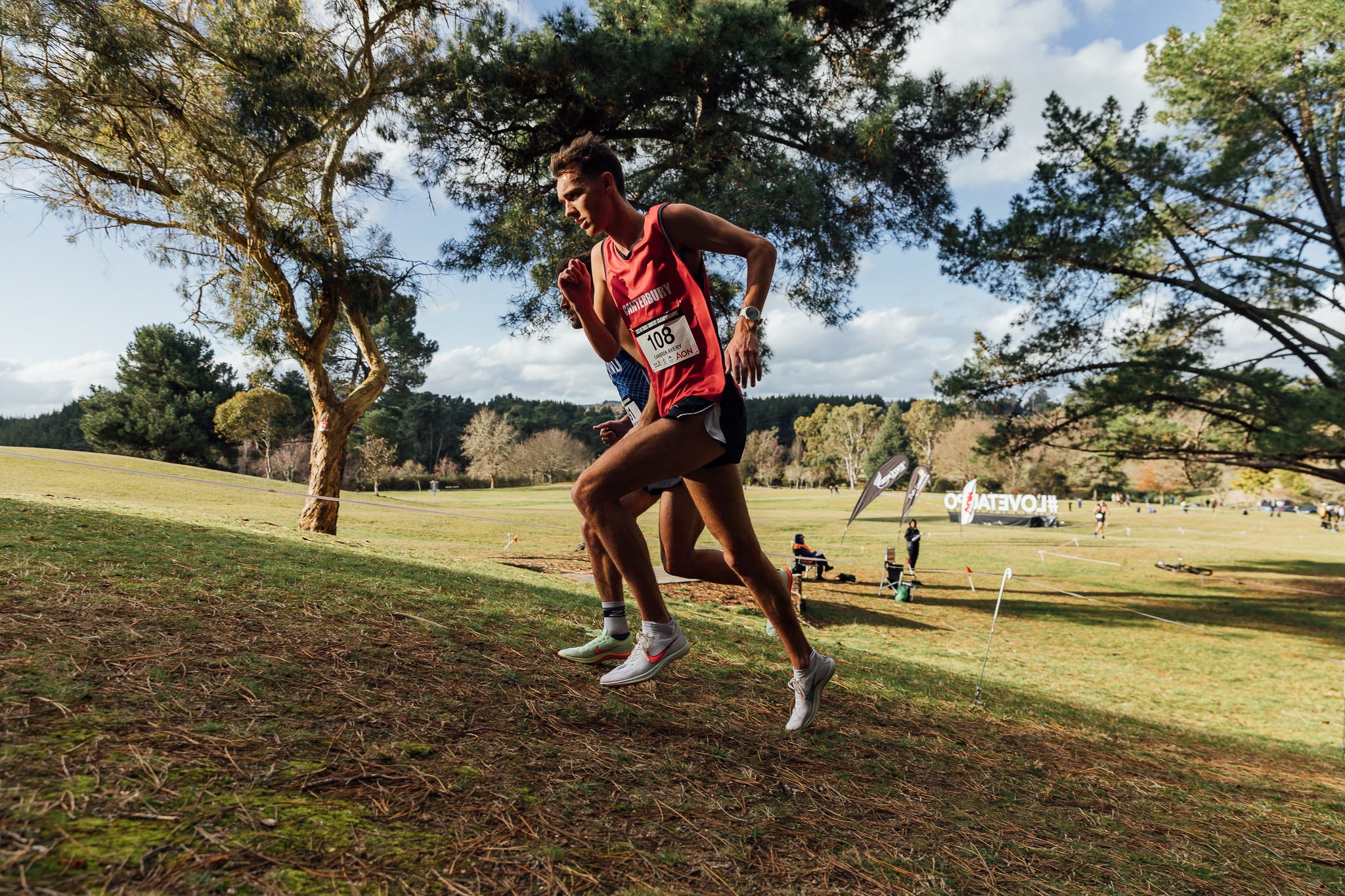 In a highly-competitive 8.6km senior men’s race, Cameron (Christchurch Avon) repelled a strong challenge, to strike gold by a victory margin of 50 seconds from silver medallist Toby Batchelor (Pakuranga) in a time of 36:10.

Making his mountain running debut, Cameron opted to enter the race determined to have “more fun” after missing a lot of racing this year through injury and illness. Believing the uphill-only nature of the course would suit his style he said: “It was a really low pressure situation for me, but I knew with 500m of elevation gains I could be in with a shot to win it,” explains Cameron. “I had a plan to just sit in behind Tim (Robertson), who I knew was the most experienced guy in the field, although that all changed after Andy Good started the race like a rocket.”

Refusing to panic he and Tim reeled in Andy after the first few hundred metres or so before the eventual gold medallist opened a clear gap on the field around 1.5 kilometres.

“I tried to replicate the tactics from national cross, where I just let my legs go to save energy but kept the pressure on, which was key to breaking the field,” explains Cameron, a former Stony Brook University student in the US. “I knew they would come back, and Tim did but he never quite got on to my shoulder and as we started back up the incline again, I heard him less and less. I then just kept the pressure on. Honestly, those first few kilometres were the toughest of the race. But as the race progressed, I got into a nice rhythm up the smooth incline and as the course wasn’t too technical that worked in my favour.”

Coached by Chris Pilone this was a sweet maiden senior national title for Cameron.

“It’s great (to win) and something I have been working towards for a while. I was hoping my first one (senior national title) would be national senior cross a few weeks ago, but I would very gladly take this. I feel that often the mountain running fields are not representative of the talent we have in New Zealand, but I feel today it was a good representative of that. I’m proud to be stood on the top of the podium.”

Competing on a gloriously sunny day the 38-year-old of Queenstown Athletics seized early control of the race to produce a commanding victory from Jessica Campbell (Sumner) by a near three-minute margin in a winning time of 47:06.

Sarah, the 2014 and 2016 national mountain running champion, came into the event unsure of how she would go because of her recent bout of sickness, however, she proved too good for the pursuers.

Sarah, who finished 40th in the 2019 World Mountain Running Championships, said: “Each of the three (national mountain running victories) is just as special, it is always nice to win a New Zealand title.

“I found 5-7km was quite hard, but I did enjoy the last kilometre. It is such an epic course and that final kilometre is breath-taking.”

For the graphic designer to come back six years after her last triumph was a special moment and reaffirmed her passion for running in the mountains.

“The mountains bring so many runners together from different backgrounds – cross country and track runners up against the sky runner or trail runner, each of whom bring different strengths, and nobody know how the race is going to play out.”

Making her mountain running debut, Siena Mackley (Queenstown Athletics), who finished fifth in the U16 race at last month’s New Zealand Cross Country Championships, capitalised on her local knowledge to claim a surprising victory in the 5.8km women’s U20 race.

The 14-year-old Wakitipu High School student, who only registered for the event because she is coached by co-organiser of the event, Neville Britton, said: “It’s a bit of a shock to win in my hometown.

“I was running with Sophie Robb for the first half of the race, and I knew I had to stay steady because I’d done some runs on the hills and knew it was tough towards the top. I just tried to pace it to make sure I didn’t burn myself too early. I broke away around halfway, but I knew Sophie was not too far behind me, so I could never ease off.”

Siena secured the title in 31:16 with Sophie (ACA) a further 54 seconds further back in silver. Kennedy Taylor (St Pauls) 34:31 bagged the bronze medal.

Ben Rickerby was another mountain running debutant to strike gold today at Deer Park Heights as he secured a convincing victory in the men’s 5.8km U20 race. The Auckland City Athletics athlete, who was inspired to compete after watching a training partner compete in the 2021 edition, only realised he was in command of the U20 race a little over 2km into the race.

“I went out with the seniors and didn’t realise no juniors were with me until the seniors turned off at the junction,” added Ben, who placed fifth in the U20 race at the New Zealand Cross Country Championships in Taupo. “Before the turnaround I had been quite relaxed but that last kilometre-and-a-half up the hill was a little bit harder. I’m over the moon to win.”