Photo: Scotty Hawker would usually be overseas at this time of year but is currently based in Christchurch due to the pandemic (photo courtesy of Kamil Sustiak)

Both the men’s and women’s national trail running titles will be keenly contested after the entry of a strong field for the Crater Rim Ultra race in Christchurch on Sunday, which incorporates the New Zealand Trail Running Championships.

Vajin Armstrong faces a real challenge from leading international trail runner Scotty Hawker in his defence of the men’s title and is expecting a tight battle.

Armstrong just won the gruelling 53km Crater Rim Ultra around the Port Hills last year, finishing 33 seconds ahead of Danieli Danesin after five hours of racing. Danesin is back again but Armstrong believes Hawker will be his toughest challenger this time.

“Scotty Hawker is the one I’ll be watching, we’ve done some work outs together so he’ll be good to race against,” says the 40-year-old from the Sumner Club.

“It should be exciting and very competitive with a deep field entered, and we’ll need to be on our A game.”

Armstrong is delighted to learn the course is much dryer this year compared to the muddy conditions last time out. He is in good form after finishing fifth in the recent Rotorua Marathon and second at the 33km Abel Tasman Coastal Classic last weekend.

“Those were the last hit outs before the championship and part of my plan and build up to promote strength and efficiency.”

Armstrong is pleased that Athletics New Zealand has given a national title to trail running and made it part of a wider running community.

“It’s super great that races are going ahead at the moment and we are able to make the most of it while we can get out there and race,” he says.

Hawker, son of race director Jamie, would normally be racing in Europe at this time but the pandemic has him currently based back in Christchurch.

He is a trail runner who started traveling full time when his daughter was born. His family spends six months of the year between New Zealand and Australia and the other six months travelling and racing around Europe.

“The Tour du Mont Blanc is my best performance and it was good to get on the podium for the first time,” says Hawker, who has been training on the course for Sunday’s race.

“I know my way around and have managed to overcome a slight niggle in the knee. I had a run this week and blew out the cob webs.”

Hawker and Armstrong will have one less tough competitor to worry about as Andrew Thompson, the inaugural national champion in 2018, has unfortunately had to withdraw.

“I broke my ankle three months ago and haven’t put in the proper training to be good enough to start,” he explains.

But Weston Hill, the 2017 winner of the Crater Rim Ultra, is back and keen to secure the title.

“I’ll be having crack at it and it will be good to learn how I’m faring after not racing for a while,” Hill says. 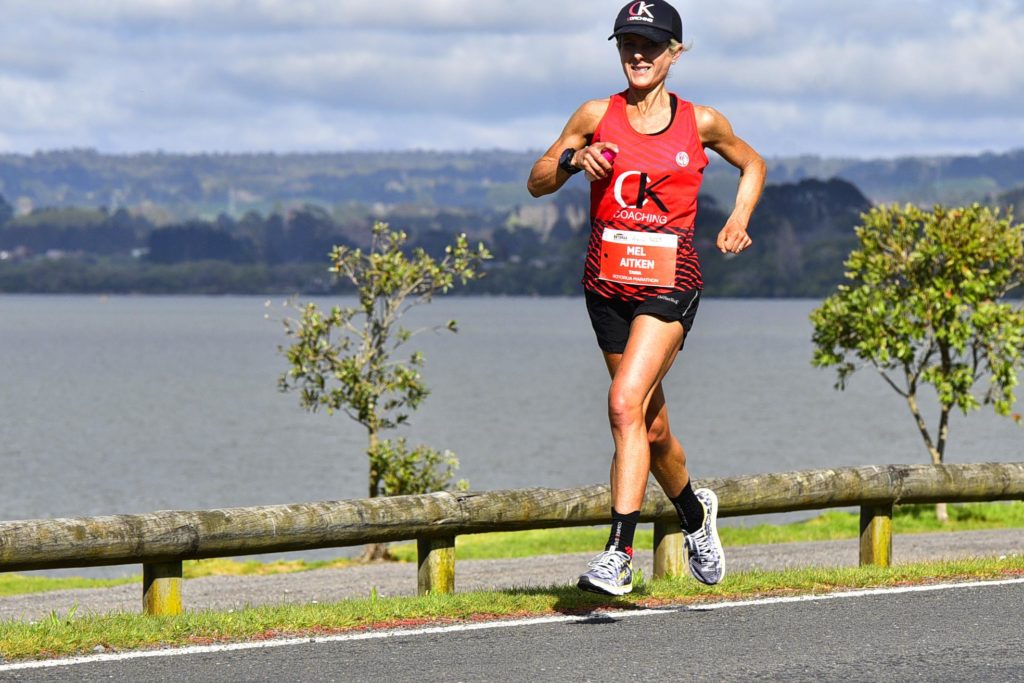 Photo: Mel Aitken is looking to defend her title in the senior women’s race

The women’s title will be equally as exciting with 2018 winner Nancy Jiang going head-to-head with defending champion Mel Aitken. Jiang recorded 5:38:15 for her title while Aitken clocked 5:57:44 last year.

Jiang, a 29-year-old structural engineer from Queenstown, says it has been touch and go as to whether she would be on the starting line at Diamond Harbour.

“I had an injury at the start of June which put me out for two-and-a-half months. I kept my fitness up by ski touring and mountain biking and eventually got the all clear to run, I’ve been gradually getting back into it in the last month and a half,” she says.

“It will be interesting to see how I go, Mel has done a lot of racing and I’ve just been cross training.”

Aitken has also recovered from an injury and been working her way back into racing. She was unable to finish the Tarawera 102km Ultra in February due to a knee problem.

The 43-year-old police superintendent from Wellington has recovered well to win the Taupo Half Marathon in August, finish second in the Rotorua Marathon and take out the Wairarapa Country Half Marathon last weekend.

Aitken is pleased to hear the conditions won’t be muddy this time.

“I’ve been nursing a right knee, so it will be a little bit of an unknown for me over the longer distance and I’ll have to take care on the climbs and downhill,” she says.

After an early morning ferry trip across Lyttelton Harbour to Diamond Harbour, entrants in the 53km race will  head up Mt Herbert and Mt Bradley, on a scenic course taking in Gebbies Pass and the Crater Rim track. Other races on the day – all with spectacular views over Christchurch, Banks Peninsula and the Canterbury Plains – are over 30km, 22km and 10km distances.

Race director Jamie Hawker is delighted with the record entry of 700 runners.

All the races finish in Hansen Park, home of the Port Hills Athletic Club, with the leading runners expected about 11.30am.