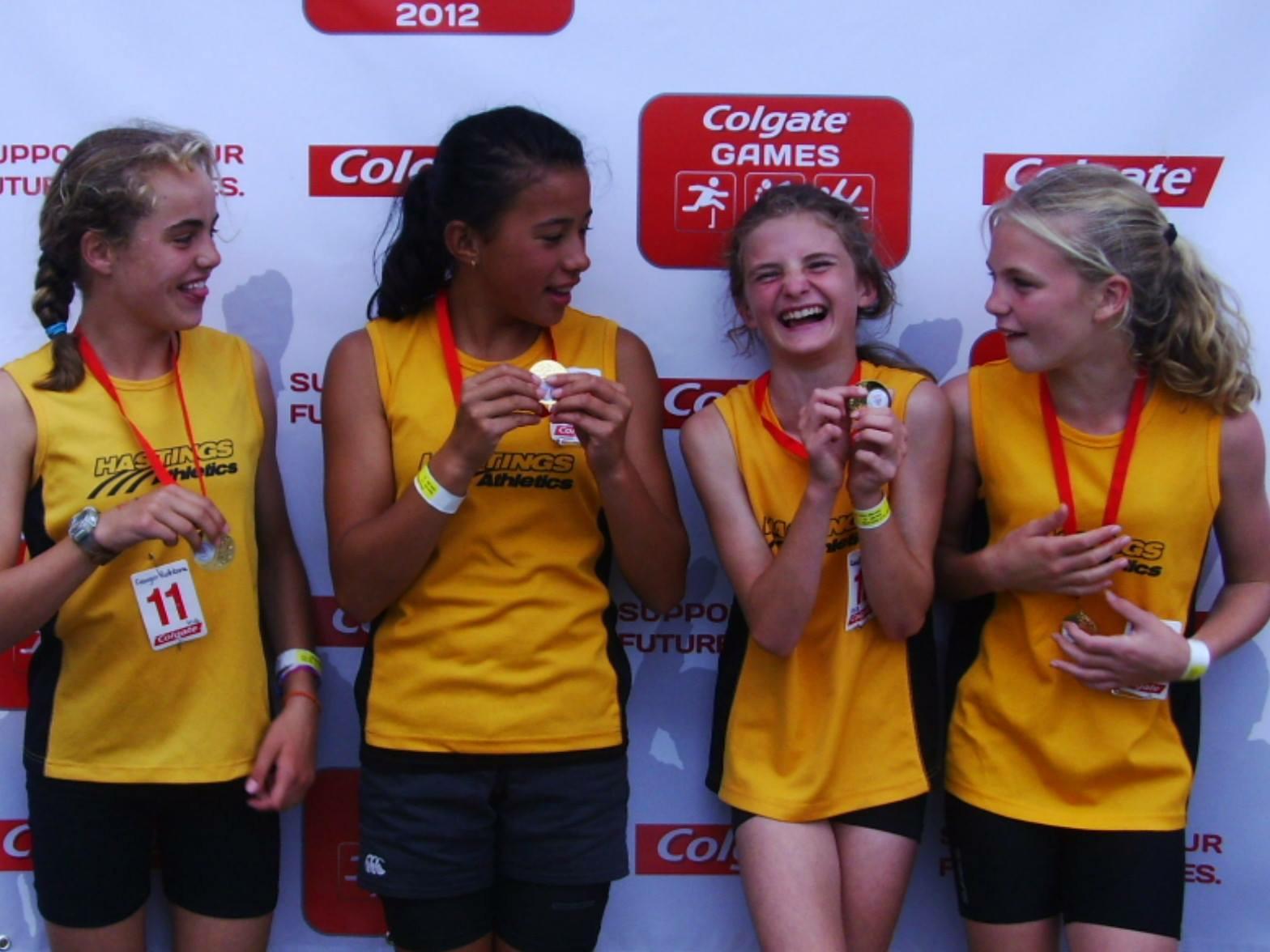 A young Georgia Hulls (second right) celebrates winning a relay medal with her club at a past edition of the Colgate Games.

Each January from 2007 and 2014 her family would make the annual pilgrimage to the North Island event from their home in the Hawke’s Bay. From sprints, relays, long jump and high jump, Georgia would use fully embrace the competition and overall experience, which it is no exaggeration to say has formed a long-lasting impression on her life.

“The event gave me a reason to train each Tuesday club night,” explains Georgia. “I was a competitive person, and the Colgate Games was always something I would look forward to. To be honest, if I had not had Colgate Games to train for each year, I’m not sure I would have stayed in the sport.”

Such is the reigning senior women’s New Zealand 200m champion’s passion for the event, the Hastings AC athlete can reel off the eight Colgate Games venues she competed at within seconds. She fondly recalls travelling to towns and cities such as Whangarei, Whanganui and Inglewood that ordinarily she would not have visited, and she reminisces about the friendly atmosphere of the event which forged friends for life.

“I always enjoyed catching up with one of my best friends, Bri Stephenson (the 2020 New Zealand senior women’s long jump champion) every year at Colgate Games,” she explains. “She lived quite far from me, so to catch up with her and the other friends I’d made was always very exciting. I’m still good friends with so many people from my days competing at Colgate Games.”

Dinners out with her club-mates were another exciting element to the Colgate experience while the marchpast in which all clubs would walk around the stadium as part of the Opening Ceremony was another highlight for Georgia.

“I remember in my first or second year at Colgates all I wanted was to join the older girls on the team during the opening ceremony. I was so excited to walk around with them and other club members. I felt really proud.”

The days were long and fun-filled, the sun nearly always shone but for Georgia there was a competitive element, and she looks back with pride at the 2012 North Island Colgate Games in Inglewood when she claimed 400m victory as one of her personal highlights.

“I think in previous years I’d scraped silver and bronze medals but winning that 400m was a great memory,” she says. “As I recall they were a lot of my club members watching and cheering me on. That really stands out.”

Georgia, 23, who this year set a 200m PB of 23.17 when winning gold at the Australian Championships to place number three all-time on the New Zealand lists for the distance, undoubtedly believes her many rich and varied Colgate Games experiences provided a good foundation for her future running career.

However, the main thrill of the Colgate Games lies not in the purely competitive element but in embracing the overall experience and atmosphere of this uniquely Kiwi event.

Entries are open for the 2023 Colgate Games until 11.59pm on Wednesday 23 November. Info here