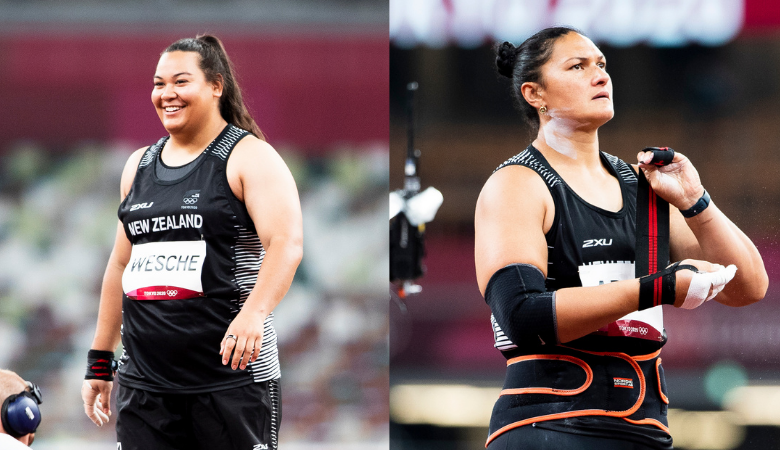 Dame Valerie Adams has qualified for her fifth Olympic Games shot put final, with fellow Kiwi Maddison-Lee Wesche joining her after also securing a place in the final on Olympic debut.

Dame Valerie was the first of the Kiwis to throw, with her round one effort of 18.75m just below the 18.80m auto-qualifier for the final. After throwing 18.59m in the second round, the two-time Olympic champion secured her place in the final with a put of 18.83m.

Having missed the auto-qualifier for the final, it was a nervous wait for other competitors to complete their third round throws, which would determine where Maddison placed in the field. Once the competition was complete, Maddison landed in 11th position securing her spot alongside Dame Valerie in the final.

The 22 year old is rounding into form at exactly the right time, after throwing back-to-back pbs of 18.40m and 18.47m at events in June, and was happy with her performance, saying she was focused on “just staying calm, staying happy, and just wanting to go out there and be proud of the performance I produce.”

“It’s a little crazy. You see the women that you have seen at the previous Olympics, and on the TV, and now that I’m here it’s a little surreal,” said Maddison. “Really happy is what I am feeling right now, super stoked and just ready to have some more fun.”

Dame Valerie and Maddison will compete in the women’s shot put final on Sunday 1 August, from 1.35pm.

Also in the evening session, Camille Buscomb lined up in heat 1, round 1 of the 5000m, the first of two Tokyo 2020 Olympic events for the Waikato runner.

After moving towards the middle of the field during the opening laps, Camille worked to hold on to the front pack as the group began to splinter but was unable to stay connected over the last few laps. Camille’s final time of 15:24.39 (14th, heat 1) was well off her best of 14:58.59, set in the 5000m final at the 2019 World Championships in Doha.

Camille is the only New Zealand athlete competing in two track and field events in Tokyo, and will line up in the 10,000m final on Saturday 7th August.

Camille said while the result wasn’t what she wanted, she hoped that getting out into the stadium and experiencing the heat would help her adapt for her next race.

“You don’t think it is going to be as hot then you realise when you are out there it is really humid and really hot, so I am hoping it will help me adapt. That’s my goal and hopefully it can come together a bit better on Saturday.”