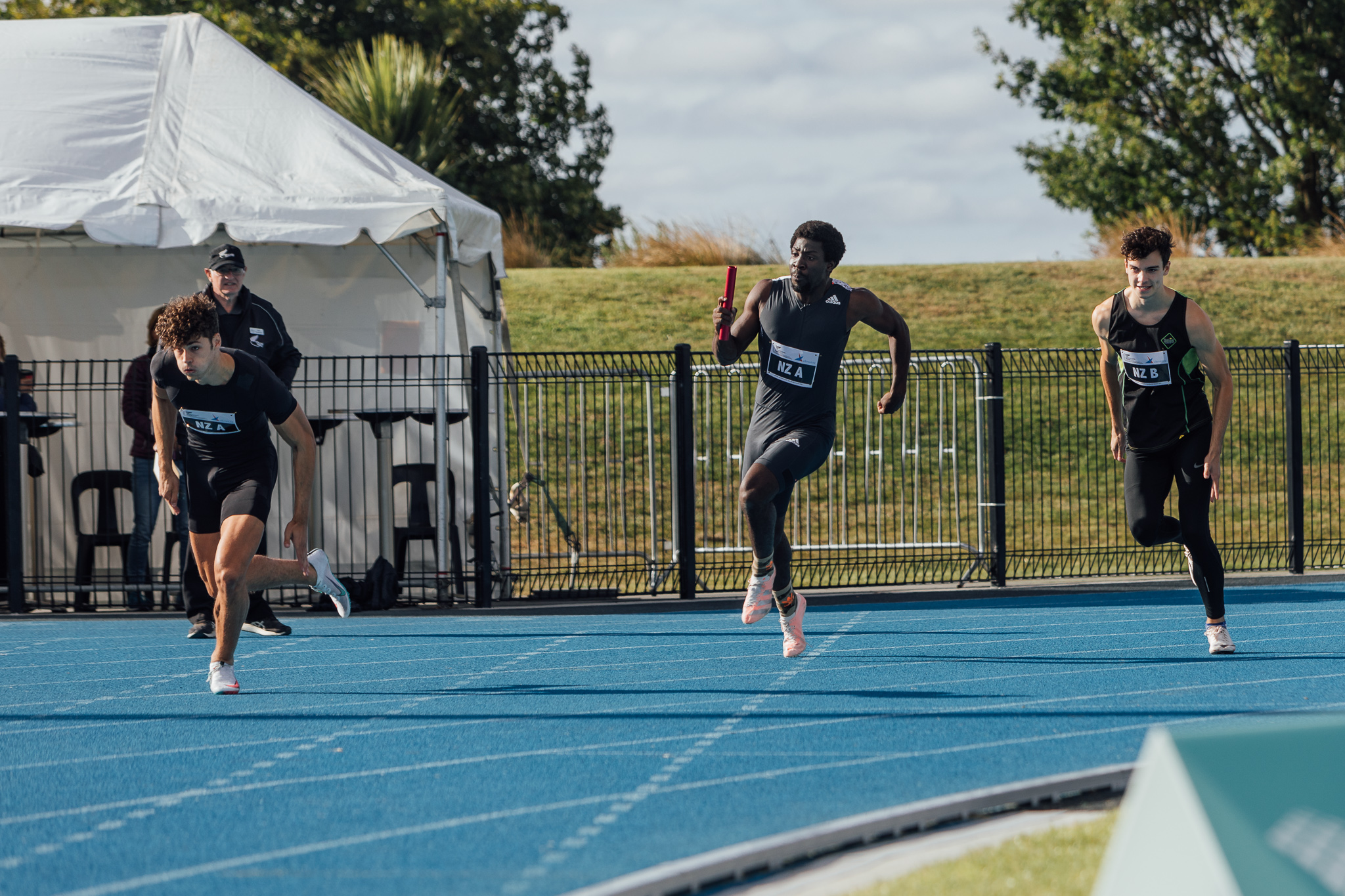 Eddie Osei-Nketia has been driven on this summer by his rival and close friend Tiaan Whelpton (Photo: Michael Dawson)

After running his quickest ever legal time in New Zealand last weekend, Eddie Osei-Nketia is hoping to confirm he is back to his best with another strong showing on his home track at the Capital Classic on Saturday.

Osei-Nketia stopped the clock in a scorching 10.28 seconds in hot conditions at the Porritt Classic in Hamilton, which signalled a welcome return to form for one of the top young sprint talents in the world.

The 19-year-old ran a wind-assisted 10.19 at the Sir Graeme Douglas International in Auckland last February but his 10 best legal times, including his legitimate 10.19 PB, had all occurred overseas in warmer conditions prior to the Porritt Classic.

“When I crossed the line I didn’t expect to run that fast but when one of the announcers told me I got 10.28 I was quite pleased with myself.”

His preparations for the season were initially slowed after breaking his arm in a bike accident last November and he has since faced a challenge to his reputation as the country’s fastest man from Tiaan Whelpton.

Whelpton sprung to prominence at last year’s Capital meeting by defeating Osei-Nketia by two hundredths of a second in 10.66.

In their match-ups this season, Whelpton surprised many by prevailing again at the Potts Classic in Hastings while Osei-Nketia was back in the winner’s circle in Christchurch at the International Track Meeting over 200m, as well as triumphing last weekend in Hamilton.

But, while they might be rivals on the track, they are close friends off it and Osei-Nketia says the pair’s relationship is getting the best out of both.

“We push each other along on the track and it just creates more opportunities for us to get faster,” he says.

Whelpton was initially entered to compete at the Capital Classic but is no longer taking part, leaving Osei-Nketia to try to continue to build his momentum without his friend snapping at his heels.

“All I need to do is visualise that I’m actually running against him even though he’s not there,” Osei-Nketia says.

Rosie Elliott, runner-up at last year’s nationals in both the 100m and 200m, was set to fight it out with Natasha Eady, who has a best of 11.61, in the women’s 100m but Elliott pulled up with an injury at the Porritt Classic.

After his outstanding debut over 400m in 47.72 in Hamilton last weekend, Hamish Gill will be having another crack at the one lapper. Rowan Blaikie, who ran a personal best of 48.86 in Hamilton, and national champion Luke Mercieca should give Gill plenty of competition to speed to a faster time. Daniel Dyet holds the meeting record of 47.28 from 2015.

Another exciting women’s 800m this season is in prospect with Porritt Classic winner Katherine Camp coming up against Rebekah Greene, who came in ahead of Camp to take the honours at the Potts Classic. They will be pushed by Susannah Lynch, Kara Macdermid and Sophie Atkinson.

Hamish Carson, fresh from his sub-14 minute 5000m in Hamilton, has moved down to the 1500m, in which he will take on Julian Oakley, Eric Speakman, Lovelock Classic mile winner Daniel Roswell, Benjamin Wall, James Harding and Tom Moulai. As it has only previously been the mile raced at the Capital Classic, there is no 1500m meeting record but meet organiser Tony Rogers has set the standard for a record of 3:43.05.

Joshua Hawkins, who has had five straight victories in the 110m hurdles since mid-March, will be looking to break James Mortimer’s 2006 record of 14.34.

Amy Robertson has gone unbeaten six times this season in the 100m hurdles and will race against Fiona Morrison and Hinewai Knowles.

Lauren Bruce will be seeking the big throw in the hammer that was waiting to come after her sixth-round effort of 73.22m at the Porritt Classic. Julia Ratcliffe, who is not competing this time, set the meeting record of 70.53m last year.

Connor Bell, who has a best and resident record of 64.29m in the discus throw, will have a double incentive to aim for – the meeting record of 65.47m by Matthew Denny of Australia last year and Ian Winchester’s national record of 65.03m. Savannah Scheen is meanwhile down for the women’s discus throw.

Australian Brandon Starc has achieved the meeting record in the high jump twice and last year cleared the bar at 2.26m. Hamish Kerr has a best this season of 2.27m and, with the right conditions, could not only give the meet record a nudge but also improve on the New Zealand record of 2.30m that he shares with Glenn Howard.

The women’s high jump will also be well worth watching with the country’s leading jumpers Josie Taylor, Imogen Skelton, Keeley O’Hagan and Josephine Reeves all entered.

There will likewise be plenty of interest in the women’s pole vault, in which Olivia McTaggart will have her eye on Eliza McCartney’s meeting record of 4.30m from 2015. James Steyn, who cleared 5.50m in the pole vault at the 2019 Australian championships, has Nick Southgate’s record of 5.30m to aim for.

Para athlete Anna Grimaldi T47 has re-established her New Zealand Para long jump record twice this year with jumps of 5.78m and 5.91m. In a field with Mariah Ririnui, Briana Stephenson, Lili Szabo, Zoe Taylor and Anna Thomson, she should have the backing for an attempt at breaking the six-metre barrier.

Scott Thomson will have his own meeting record of 14.88m from 2014 to aim for in the triple jump.

Gates open from 3pm with the live streaming scheduled to begin at 5pm.