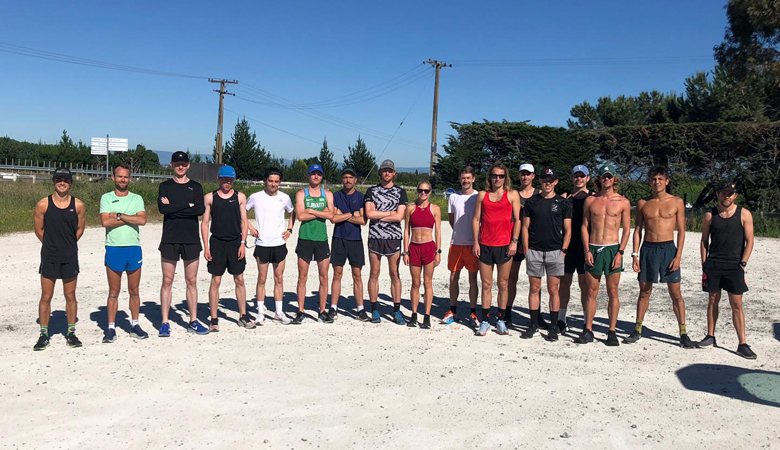 The latest Athletics NZ distance hub staged in Hastings acted as a timely boost to a large cluster of the country’s leading middle and long-distance athletes in the countdown to the forthcoming domestic track and field campaign.

Following on from the first distance hub held in Rotorua in July and last month’s women’s-only initiative in Christchurch, the picturesque Hawke’s Bay region was used as a base for 20 or so of the country’s leading athletes for the near two-week camp held from November 8 to 21.

The distance hub attracted a number of athletes targeting the Tokyo Olympics, such as Matt Baxter, Sam Tanner, Geordie Beamish, Eric Speakman, Hamish Carson, Camille Buscomb and triathlete Hayden Wilde. There were also a number of returning athletes from US colleges (Mitchel Snell, Murdoch McIntyre, James Uhlenberg), as well as a range of other domestic-based athletes currently on Athletics NZ’s radar such as Matt Manning, Ben Wall and promising junior Zach Bellamy.

With the bulk of the camp attendees staying in a lodge in nearby Havelock North, athletes had easy access to the top-class Hastings Sports Park facility, which included a 400m track, gym and 2.2km lime chip loop – an ideal range for different workout combinations.

Meanwhile, Hawke’s Bay locals Speakman and Beamish also shared their specialist running knowledge of the region to suggest other local running routes such as the trails flanking the Tukituki River and the Te Mata Peak trails.

“The purpose of our distance hubs is to bring athletes based around the country together for blocks of training, to experience the benefits of preparing together,” explains Athletics NZ lead distance coach Steve Willis.

“Our task is to create training environments that enable high-quality preparation in which athletes can bounce into for two-to-three weeks at a time, make some adaptions, and take key learnings back to their base locations.

“For the Hawke’s Bay camp, we had a nice mix of athletes at different stages of development. We talked a lot about the importance of athletes having specific goals for the camp and making sure every session had a specific purpose that related to those goals. Athletes were encouraged to manage their own training intensity and recovery, and tailor group workouts to suit their needs.

“We wanted it to simulate what it’s like training and racing in Europe where, for example, you have to learn to manage your own training, jump in and out of workouts and cook for yourself.”

With the athletes gearing up for the pre-Christmas racing block on the track – highlighted by the Night of 5s meet at Auckland’s AUT Millennium – Steve says the two-week camp offered four key workouts which athletes had the option of joining should it meet their training needs.

It was run in two groups – the lead group of which included Wilde, Tanner, Speakman, Baxter, Carson and Peter Wheeler – which revealed the strength of group training, according to Steve.

“The group hit some phenomenal times even compared to what Nick (Willis, the two-time Olympic 1500m medallist) would do,” he explains. “Every January, Nick would complete this session but the times this group did exceeded his for all distances except the mile (1600m). This is the power of running in a group and proves that when you put our best guys together, magic can happen.”

He offered his take on the local history of running in the region, the importance of keeping a training diary and consistency of training.

The athletes also shared goal setting targets during the camp and what they wanted to get out of the experience, which included everything from improved recovery to varied physiological outcomes. Every few nights, the group shared a meal together which the athletes prepared.

Overall, Steve believes the camp was a big success and he received some positive feedback from the athletes.

“It reminded me of the importance of bringing people together to train in groups. People want the opportunity to train together,” he says.

“We don’t have the population to support multiple professional groups around the country but this shows what can happen if people invest in getting together. As coaches, this gives us some important food for thought moving forward.”

Perhaps, however, the most important takeaway from the camp is the exciting shape of the athletes in the group. Steve says their individual coaches have done a great job and believes we could be set for some special performances during the forthcoming domestic season.

“I think we’ll see some guys qualify and run (Olympic) A standards here in New Zealand, which we’ve not seen for a long time,” he adds.

“This will be fantastic and hopefully act as a spur for the younger generation of athletes coming through.”