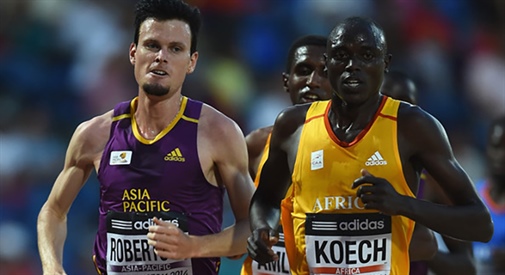 Left: Zane Robertson representing Asia-Pacific in the last edition of the Continental Cup in 2014.

Four Kiwi athletes, including newly crowned Diamond League champion Tom Walsh will contest the IAAF Continental Cup competition in Ostrava, Czech Republic on 8 & 9 September. The Competition sees the two best athletes from Europe, The Americas, Africa and Asia-Pacific compete for their region. A rule stipulates only one athlete per country, per event is eligible.

The New Zealander’s included in the Asia-Pacific team are: Joseph Millar (200m and 4x100m Relay), Angie Petty (800m), Eliza McCartney (Pole Vault) and Tom Walsh (Shot Put).  The team is made up of representatives from the Oceania and Asian Athletics Associations, in what is a very geographically vast area.

The competition in Ostrava will feature 37 different events over two days, with nearly US$3million on offer, including US$30,000 for individual event winners. Team scoring will be kept with an overall continental winner crowned at the end of the competition. Several innovative events are on the schedule, including an elimination style 3000m event, where athletes in last place are progressively removed from the track and a mixed 4x400m relay event.

For the latest information on the IAAF Continental Cup, including full team announcements for the four teams – visit https://www.iaaf.org/competitions/iaaf-continental-cup