From back row forward to cross country king 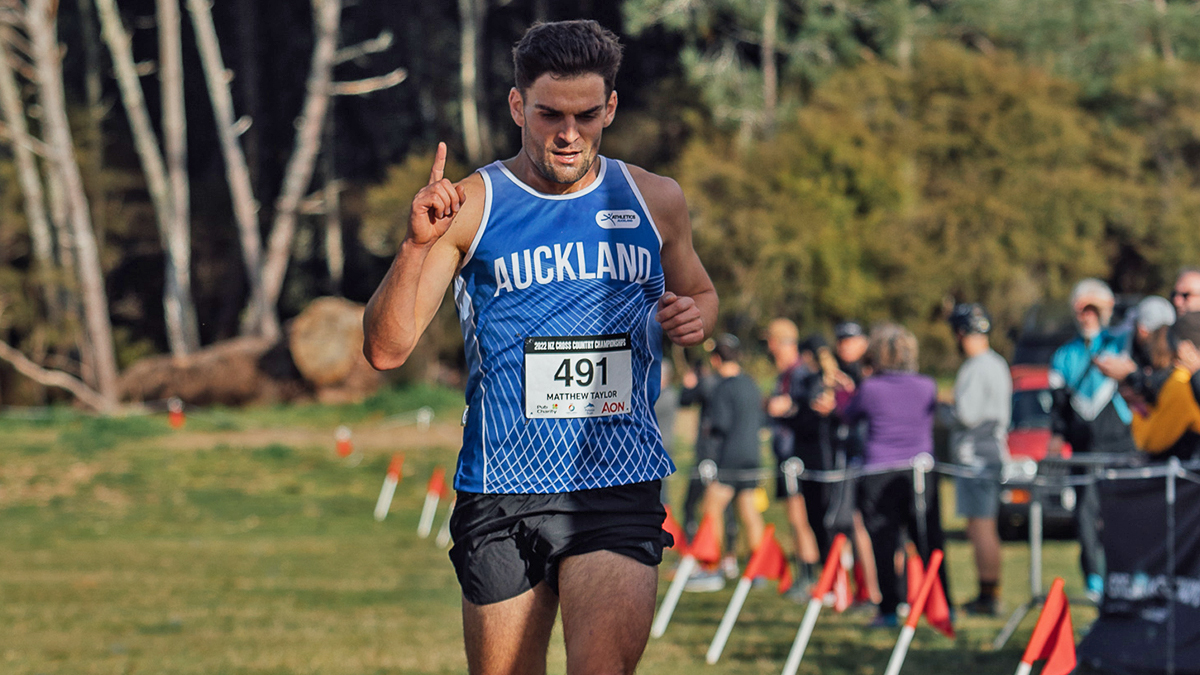 Just six years ago, Matthew was a 90kg back row forward for College Old Boys in Palmerston North but after opting to change tack and re-engage with his schoolboy passion for running he has since transformed into a 70kg athlete and today is one of New Zealand’s leading domestic endurance performers.

This year Matt has enjoyed his best season to date, winning national silver and bronze medals over the mile and 3000m and last month at Spa Thermal Park in Taupo he secured the biggest success of his career so far when landing the national cross country title.

“I’ve had a very unorthodox route into athletics,” explains Matt. “I always wondered what I could have done in athletics after I stopped, so it was the right decision for me to return.”

Raised during his formative years between living on a beef farm in Colyton just outside of Feilding and a hill country farm in the Wairarapa, Matt has enjoyed a peripatetic life later moving on to boarding school at Lindisfarne College in Hastings.

It was here the sport-mad Matt discovered his running ability. As a year nine student he won the 2008 New Zealand Secondary Schools Cross Country title in New Plymouth. The following year he claimed the national secondary schools 3000m crown in Timaru – one place ahead of Matt Baxter, who would later go on to win the New Zealand 5000m title – but competing in a range of sports from rugby to hockey and tennis to volleyball, athletics was never his central focus.

“I had a talent for running but I never really trained when I was younger,” he says. “As the other kids got more serious and trained harder my results got worse.”

He spent a year playing rugby overseas in England and Scotland and when he returned to New Zealand to study in Palmerston North he focused on rugby for College Old Boys.

“It was tough going for the first year or so because I was trying to work out what it meant to train as a runner because I’d not really done so before,” he explains. “I’d never really done training or mileage. I learned a lot, but it wasn’t easy because at that time I started a full-time job (in Palmerston North), so finding that balance was hard.”

Matt owes Mark a debt of gratitude for transforming him into an athlete from “0mph to 100mph” and in 2018 – only his second serious year in the sport – he secured the senior national 1500m bronze medal to offer a tantalising glimpse of his hugely exciting talent.

“That was probably my first notable performance, and it surprised a few people including myself,” he explains. “But winning bronze showed me I might have made the right decision moving to athletics.”

At the start of 2019 he moved to Auckland for a new job but shortly after the 2018-19 domestic track and field season- and after missing out on 5000m qualification for the World University Games – he quit the sport for a second time.

“I started a new job in Auckland and felt a bit burnt out,” explains Matt. “That has nothing to do with Mark (Harris), who had done an amazing job, but I had probably taken on too many commitments.”

For “four to five months” Matt did not run a step until Steve Langdon of the North Harbours Bays club persuaded him to compete at the New Zealand Road Relay Championships later that year. Coaxed into the run, Steve then introduced Matt to the Chris Pilone, the experienced former coach of double Commonwealth Games medallist Nikki Hamblin, and Matt re-started his running career.

So given Chris’ stature in the sport what are his qualities as a coach?

“For me, he (Chris) is a genius,” explains Matt. “It has taken a couple of years, but he has really worked out the formula which works for me. My mileage is not super high because I work long hours. I average around 100-110km a week and I limit myself to a couple of moderate intensity workouts a week, but it seems to work.”

Describing himself as more of a “strength-based runner” and spending a large chunk of his time while living in Auckland training at the Riverhead Forest in 2020 he secured his maiden national senior crown to take out the 3000m title in Hastings.

“My expectations were pretty low because I’d just come off that break, I’d had a very light winter so the base wasn’t really there. But the race (the NZ 3000m championship) couldn’t have worked out better for me. It was won in 8:29, which could possibly be the slowest 3km time ever. And had Hayden Wilde gone for it he probably would have won. It was unexpected, I was really stoked, and it further justified the decision for me to get back into the sport.”

Benefiting from another full winter training behind him in 2021 he secured the silver medal at the New Zealand Cross Country Championships – finishing runner-up behind Oli Chignell at Chisholm Links in Dunedin.

But while he showed many positive signs last year, this calendar year has proved the best yet for Matt, who relocated to Christchurch in February to take up a role as project engineer for Southbase Constriction working on the new Christchurch stadium project. Fortunate to have Southbase as his employers he says he would not be able to achieve what he has in athletics without their support and flexibility.

Training alongside Cameron Avery – who is also coached by Chris Pilone – plus a range of other Christchurch-based runners including Russell Green, David Lee, Tom Moulai, Caden Shields and Oska Inkster-Baynes – he has thrived in the setting.

“Training with an awesome bunch of guys, makes motivation so easy,” he adds. “The Port Hills and the flats in Hagley Park offer a great mixture and an ideal landscape for distance running.”

He won a New Zealand 3000m bronze and when scooping a national mile silver medal in Whanganui he clocked 3:59.80 to become the 44th Kiwi in history to record a sub-four-minute mile.

Running proudly in the New Zealand vest, Matt claimed a 1500m bronze medal – behind compatriot and 3:31 performer Sam Tanner – to take out a first international podium at the Oceania Championships in Mackay in June but he approached the New Zealand Cross Country Championships at Spa Thermal Park in July lacking in a little confidence.

“To be honest, I wasn’t expecting to do as well as I did the year before (when Matt won silver),” he adds. “I’m always aiming for the gold, but the preparation wasn’t the best after coming back from Oceania Champs. My usual winter build up was quite disrupted by competing in Mackay. A couple of things did not go as planned and between Oceania Champs and national cross I did no racing at all.”

However, with his training partner Cameron Avery setting a nice even pace at the front by the final 2km or so it was Matt and Cameron locked in a battle for gold. Matt made a decisive move just before the final climb to take a clear lead although he denies making a conscious break at that point of the race.

“I thought if I was with him on the flats, I could probably rely on that 1500m type speed to get away,” he says. “I made the same move as did the year before at North Island champs. I kept more of a consistent pace, I didn’t really slow up the hill and it did the trick.”

Matt kicked away to a 13-second victory to clinch the greatest win of his career so far.

“Winning that national title over 3k was momentous because it was my first one, but to win a national cross up against a stacked field full of domestic runners and to win a race over a distance (10km), which is not my speciality, is extra special.”

Matt’s next big goal on the horizon is to win selection for the World Cross Country Championships in Bathurst, Australia in February. To achieve that goal, he will be looking to hit a 10,000, qualification mark and is targeting the Agency Group 10,000m Festival in Wellington in November plus a potential meet in Australia later this year.

With the World Cross in mind should he secure selection he will target more of “a 5k and 10k programme” during the forthcoming domestic track season rather than the 1500m and 3000m, which was previously been his track emphasis.

A relative newbie to the sport, Matt still has many years ahead of him and is excited by what he can achieve

“I’m still assessing my future goals I’ve got a lot of work commitments on the stadium, but I do want a crack at higher honours and I would love to run indoors for the experience, especially to see how an indoor 3km could go.”