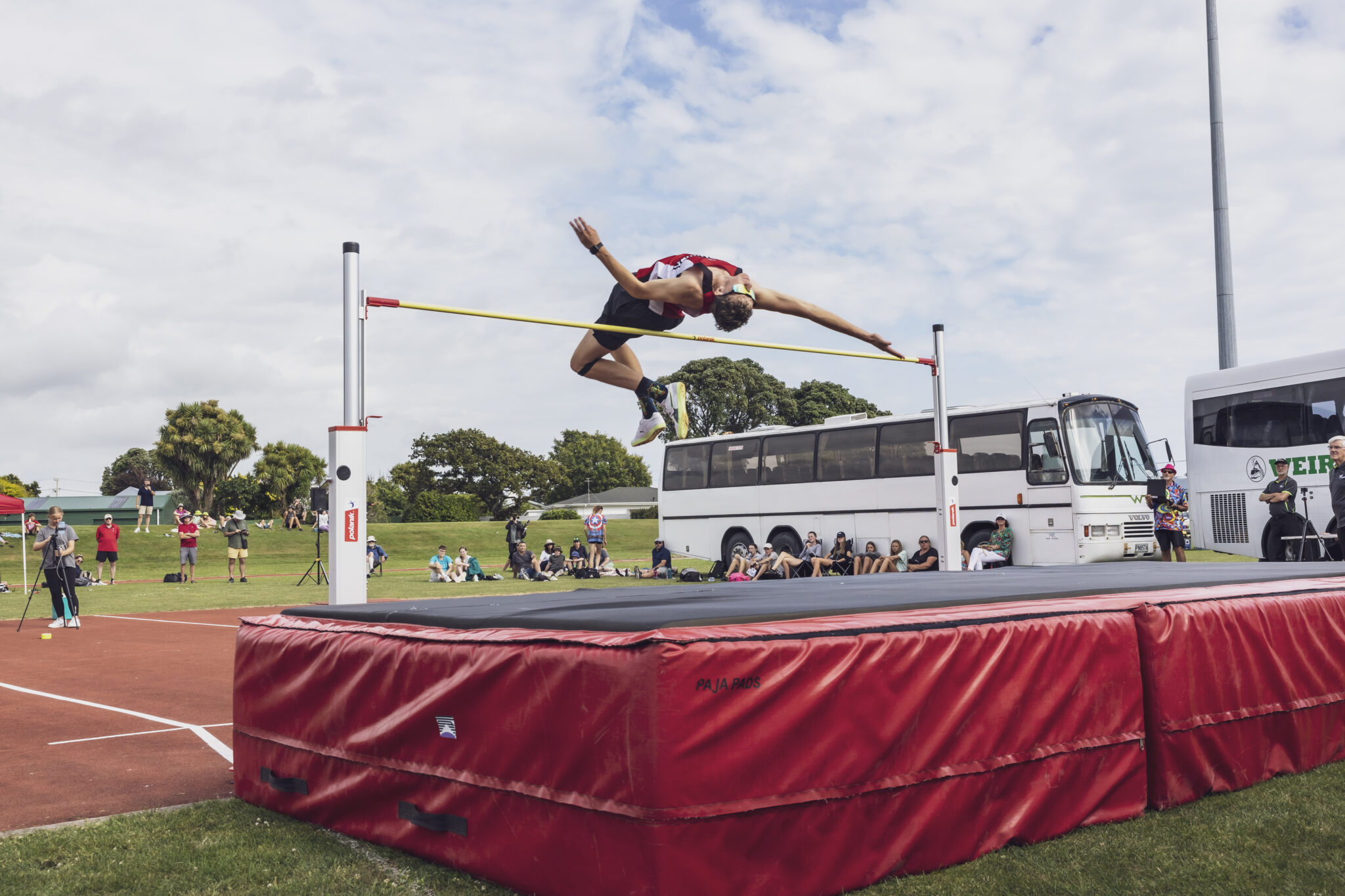 Hamish Kerr opens his 2023 campaign with his sixth victory at Jumps to Music. (Credit: Abi Bridgman at Honey Suckle and Holly)

On a sun-drenched evening in Taranaki, Commonwealth high jump champion Hamish Kerr opened his 2023 campaign with victory in the tenth anniversary edition of Jumps to Music in Hawera, soaring clear at 2.21m.

The 26-year-old Christchurch-based athlete claimed a sixth victory in his seventh appearance at the event, which has grown in stature over the past decade and today is a must-do event for the leading domestic jumpers in New Zealand.

With all competitors jumping to a song from their year of birth – Kerr selected the Spice Girls classic Wannabe – the World Indoor bronze medallist made a comfortable first-time clearance at 2.15m before taking on the more demanding challenge of 2.21m.

Competing in trademark Christchurch Old Boys United kit he was untroubled with that height, flying comfortably clear at the first time of asking before attempting 2.27m – a height which would have bettered his meet record of 2.24m. On this occasion the New Zealand record-holder at 2.31m found 2.27m beyond him but he was satisfied with his efforts.

“It was a bit of a hit out as it always is for the first comp of the season,” Kerr explains. “It is always nerve-wracking because you never quite know how the body will react, so it was nice to clear 2.21m and prove I can still high jump! The 2.21m clearance was massive, so if we can put that together more over the coming weeks I’ll be set for a pretty good season.

“This time of the year, I have good days, bad days, good jumps and bad jumps, there is a lot of variation. That is because we make many changes with the speed into the curve, which is hard to control, and the reason why I couldn’t quite convert that height. But there is a lot of time to put that right and we are focused on August and the World Championships.”

Kerr will next compete at Cooks Classic in Whanganui on Saturday before embarking on a month-long European indoor tour where he plans to compete four times before returning home to defend his national title at the Jennian Homes New Zealand Track & Field Championships at Newtown Park, Wellington in March.

Behind, the growing strength in depth of men’s high jump was further revealed as both Rafe Couillault (Papakura) and Mate Poduje (Hill City) cleared 2.06m to set PB’s.

Poduje, the national senior bronze medallist, produced a performance of great courage taking 14 jumps in the competition, and requiring a third time clearance at 2.06m to add 2cm to his lifetime best.

Imogen Skelton edged an absorbing women’s high jump competition on countback from her recent-established training partner Alexandra Hyland as the pair both cleared 1.81m, the latter achieving a PB.

Skelton, of Auckland City Athletics, enjoyed a breakthrough performance when setting a PB of 1.86m to win women’s high jump silver at the New Zealand Championships and today she produced an assured display with first time clearances up to and including 1.81m. Fuelled by a playlist which would not have sounded out of place in Ibiza 2000, Skelton also produced one fantastic effort at 1.84m where she appeared to clear the bar only for it to seemingly mysteriously topple to the ground.

Despite taking second Hyland was arguably the star of the show in the women’s high jump today. Performing confidently a first-time clearance at 1.81m (she required two attempts to clear 1.77m) for the 2022 national high jump bronze medallist represented a 3cm improvement and bodes well for the rest of the season for the 23-year-old Aucklander.

Maddie Wilson (1.77m) took third on countback from Commonwealth Games sixth-place finisher Keeley O’Hagan, who had to settle for fourth.

Skelton, who has finished five previous times on the podium without ever taking top spot at Jumps to Music prior to today, said: “It is so good to finally be able to get the win. It was a good opening competition for me, I’m happy.”

“I normally train at Mt Smart with my coach (Kieran McKee) but because the track has been closed, I’ve recently been training with Alex and her group at Pakuranga. It has been nice to have someone else to jump with and I’m stoked she jumped so well and got a PB.

“I had a back injury at the end of last year, it was a bit of a shaky start to the season but I’ve had some really good training sessions. It would have been nice to have cleared 1.84m. I’m aiming for the high 1.80s and 1.90m by the end of the season.”

Hannah Sandilands reaffirmed her outstanding recent form by taking a decisive victory in the women’s long jump with a best of 5.95m (1.5).

The 26-year-old Christchurch Old Boys United athlete, who has only been jumping seriously for four years, improved her PB by a monster 29cm to win the Potts Classic with a breakout 6.20m last Saturday and impressed here in Hawera.

Coached by her husband James, Sandilands took control of the competition with a second round 5.92m (3.0) before adding a further 3cm to that mark in round five. The 2022 Jumps to Music champion Mariah Ririnui advanced into second with a 5.82m (1.4) jump with her final effort to relegate local athlete and meet organiser Ashleigh Bennett to third after a best of 5.74m (2.8) in round five.

“I’m really focusing on my run up and the style of running,” said Sandilands. “At Potts it all clicked and today it was a little easier because I know I can do it. Tonight was all about setting myself up to be in a good position at take off on the board, and it kind of worked.

“It was my third time at Jumps to Music and I would say in my two previous appearances they were pretty humble as I was down in the low five metres. Yet it is always a fun meet and it is nice to get to chose a couple of songs to jump to, which helps get the crowd involved. The supporters and officials do a great job and Ashleigh (Bennett) is the genius who brings it all together.”

Dressed as WWE wrestler John Cena, pre-event favourite Angus Lyver lived up to pre-event expectations to win the men’s long jump with a best of 6.97m (1.6). Jumping to Cena’s theme song The Time is Now as well as Kiwi classic Walkie Talkie Man by Steriogram the national U20 long jump and decathlon champion followed up in round two with a 6.91m (0.3) leap.

The 18-year-old of the Palmerston North club then went out to a huge foul in round four measured at close to 7.50m but tweaked his knee in the process, opting not to take his final two jumps.

It was all change for the minor placings in round six as first Forbes Kennedy leapt at to 6.42m (0.6) to briefly hold second only to be dislodged from that position by Matthew Aucamp, who jumped one centimetre further with his last effort, benefiting from a 1.4m/s tailwind.

“Jumps to Music is the event on the calendar I most look forward to, it is probably the most fun I have competing,” said Lyver. “The atmosphere is amazing, and it is always surprising how many people get PB’s.”

“I had that jump around 7.50m, which was just a foul. It was annoying because it would have been a massive PB,” adds Lyver, whose lifetime best set in November last year stands at 7.19m.

Full results to be posted here