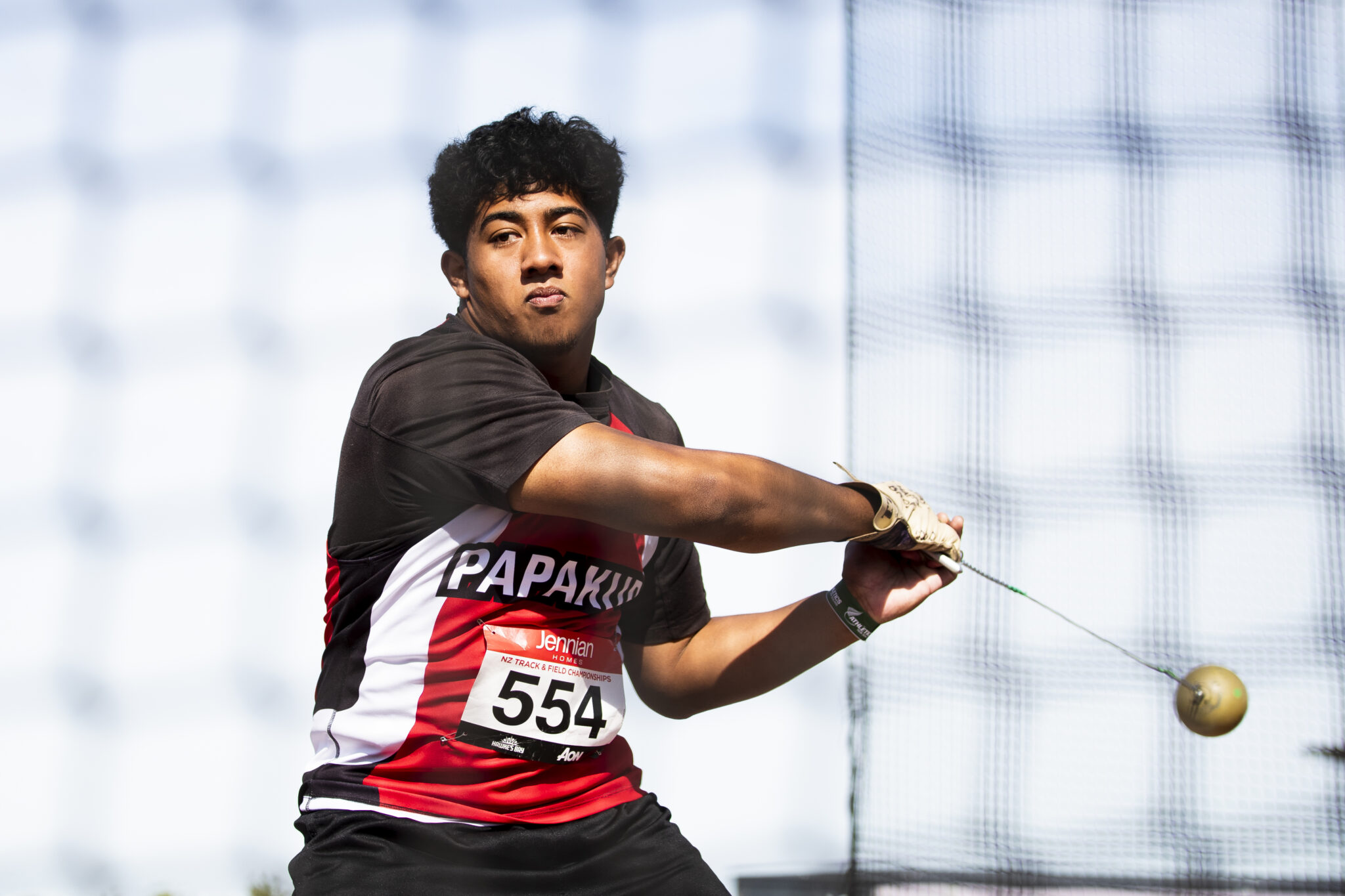 National U18 hammer champion Levi Pupualii has enjoyed a meteoric rise in the sport. Ahead of the 2022 New Zealand Track, Field and Road Secondary Schools Championships in Inglewood later this month, Steve Landells charts his unlikely journey and hopes for the future.

It is not uncommon for Manurewa High School student Levi Pupualii to suddenly pick up a bag or other random objects and start spinning in circles. This could be at home, at school or anywhere yet what might appear slightly quirky behaviour to the outside observer when we discover Levi is one of the most gifted young hammer throwers in the country his actions are a more explainable.

Described by his coach, John Eden, as “one of the most natural hammer throwers I have ever seen” there is little doubting the South Aucklander’s hugely exciting raw talent – which saw him secure junior boys’ gold at the 2020 New Zealand Secondary Schools Championships in Tauranga in the first hammer competition of his life.

“I was pretty amazed to win and become a New Zealand champion,” he recalls. “I think that win changed everything for me.”

Some two years on and Levi has continued his progression. Earlier this year he was crowned national U18 champion in Hastings and in June – despite a challenging preparation period – he snared an U18 hammer bronze medal at the Oceania Championships.

Next up is a return to the New Zealand Secondary Schools Championships in Inglewood later this month (9-11 Dec), where he will be in the hunt for gold in the senior boys’ hammer hoping to further cement his rising status

Born the third eldest of six siblings in Manurewa, Levi admits his hammer journey has been an unlikely one.

“I’d never done any sports when I was younger,” he says. “I’d never thought of myself as a sports person until I tried discus at intermediate school. It was fun, I liked the challenge of the event and taking on rivals.”

Yet if discus was his gateway into athletics, it was not to prove his destination. While at Manurewa High School he picked up a spare discus on the school field and started throwing. At that moment he was approached by the PE teacher Deon Wagner, who suggested he give hammer a crack only to be greeted by a non-plussed expression from the then 15-year-old.

“I had never even heard of the hammer throw,” admits Levi. “But when I went to that first hammer session, I was amazed by the power of the event and how far the hammer could be thrown. After deciding to give it a go, I stuck with it, got better and better and threw it 30m, 40m and then 50m.”

Having first picked up the hammer in term two of 2020 by term four he was to be crowned national secondary schools champion, a meteoric and inspiring rise for the youngster.

After his first coach, Deon, moved on to a new school, Levi decided to connect with John Eden at the “New Zealand Home of Throws” at Bruce Pulman Park in Takanini and his career has continued to flourish.

Under the coaching of John, Levi admits he has developed as a person both inside and outside the hammer cage and the teenage thrower fully acknowledges the key role his mentor has played in his development.

“John is one of the best coaches I know,” explains the Papakura AC thrower. “John is hard on us, but we understand why because he is not only trying to teach us how to throw the hammer but also teach us discipline and time management.

“Towards the end of 2021 I hadn’t been turning up to training because I’d been too tired playing video games all night. John had a talk with me and explained that there are no short cuts to being a champion.”

It was a conversation which had the desired impact. Levi knuckled down to training, set a PB with the 5kg hammer of 62.12m at the Auckland Secondary Schools Championships and secured the national U18 title with an impressive hurl of 61.17m in Hastings – a performance which triggered a hugely positive outcome for the Year 12 student.

“Hastings really woke me up,” he explains. “I was interviewed by a couple of people after that competition and that was a really big thing for me. From that day on I haven’t played video games.”

Selected for the New Zealand team to compete at the Oceania Championships in Mackay was the next step in his athletics journey and despite finishing a little below his best with a 58.63m throw for bronze, the South Aucklander was satisfied with his efforts in Australia.

“I had picked up a shoulder injury doing a medicine ball exercise and then two days before competition I had to spend all day in bed on my birthday because I had a fever.

“I still felt a little achy on the day, but I vowed having spent all that money to come here, I can’t not come away with a medal. My first three throws were fouls but for the fourth throw I didn’t even think about technique or speed, I just went full out. When I hit 58m I was relieved. It was not too bad to win bronze after the shoulder problem and sickness.”

Training three days a week at Bruce Pulman Park and adding gym sessions at school, Levi believes his flexibility honed by two hip-hop dance sessions a week are a real strength. He also believes his speed in the circle has significantly improved in recent months evidenced by a new PB throw of 62.80m at AUT Millennium last weekend.

Now he is ready for a strong showing at the New Zealand Secondary Schools Championships in Taranaki – in his first big goal for the 2022-23 campaign.

“I’ve definitely got faster, although I know I need to be able to control the speed,” he admits. “I would like to get a PB at secondary schools and later in the season I want to try and throw 70m, I feel I can improve much more.”

Yet whatever distances follow he plans to keep spinning in the circle, in the lounge, at school anywhere – because of his deep-seated passion for the hammer.

“I love the speed of the event and the weight of the hammer, how it pulls you,” explains Levi. “It just feels really nice.”