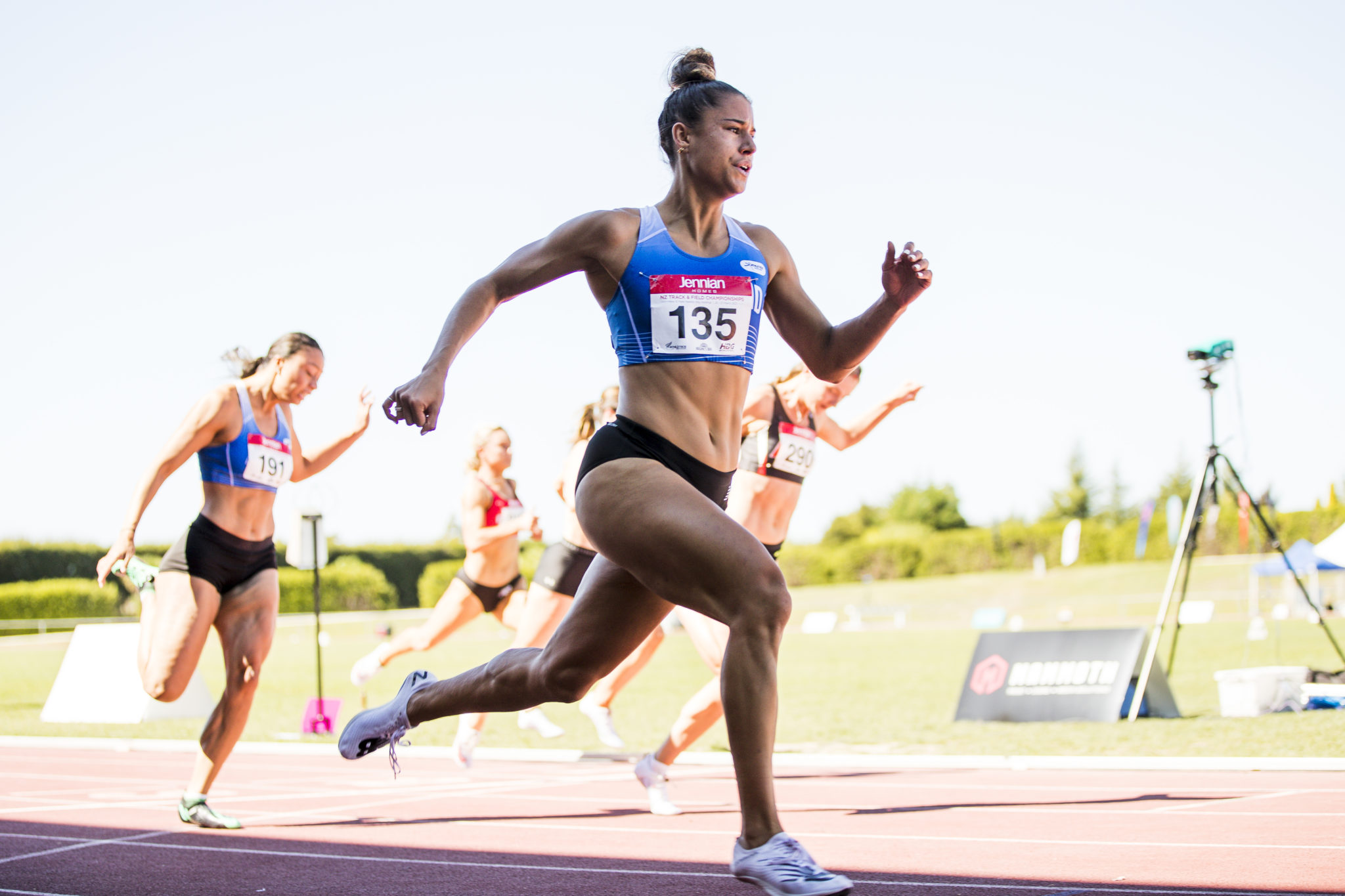 Zoe Hobbs ignited the opening of the Jennian Homes New Zealand Track and Field Championships in Hastings to secure victory in a red hot women’s 100m final by equalling the national record with a scintillating time of 11.32 (+1.4m/s).

All season, the 23-year-old Aucklander has been knocking on the door of Michelle Seymour’s long-standing New Zealand record mark and today aided by a healthy – but crucially legal – tailwind at Mitre 10 Park she chipped 0.02 from her previous best time to match Seymour’s mark set in Melbourne 28 years ago.

It was also quite a celebratory moment for James Mortimer, coach to all three medallists.

Hobbs, who also set a record equalling fifth successive national women’s 100m title – to match the mark of Kim Robertson (1976-80), said:  “It feels so good. I’ve been working all season (for this) and I’m stoked to take it on the last race of the season.

“I’ve been working all season to get that start right, typically it is a strong part of my race – it felt good in the heat and it was nice to execute it (in the final),” said Hobbs who also lowered her New Zealand resident record by 0.02.

“It is a relief, although it is bittersweet because it would have been nice to get that outright record. It will be nice to take that next step – the outright record is now only 0.01 away.”

Shay Veitch completed the senior men’s 100m and long jump double during the most momentous hour or so of his upwardly mobile career.

The versatile 20-year-old athlete, who last year claimed a 400m silver and long jump bronze medal, produced an outstanding performance in the latter event producing the longest leap to take out the title for 30 years with a mighty 7.78m (+2.4m/s) effort to bank gold.

The Dunedin-based biomed student athlete dominated the competition producing an ultra-consistent series with his first four jumps all at 7.70m or beyond. He also earned the bonus that his legal best jump of the day – a 7.71m (+2.0m/s) effort – earned him a 5cm PB ahead of the minor medallists; Felix McDonald 7.38m – the 2020 champion and Max Attwell (7.02m).

He then returned less than an hour after completing his long jump win to claim an emphatic win in the senior men’s 100m final – stopping the clock in 10.34 – albeit aided by a hefty 3.8m/s tailwind.

Making a slick start out of the blocks, Veitch quickly established control of the race and claimed gold by a 0.08 margin from silver medallist Cody Wilson (Wellington).

“I came in wanting the long jump title and the 100m was a little bit of a bonus,” explains Veitch. “I was a bit scared coming into the race because I yanked my groin in the warm-up but I got a great start and I managed to put together my best race this season.

“Obviously, some of the best runners in the country aren’t here so it was a good year to take the title.

“The goal in the long jump was to get past 7.70m which I did, hopefully that will set me up for jumping towards eight metres next season,” adds Shay.

“Last winter I got stuck into training like never before. I was injured for six weeks (hamstring) from December, so the three-week postponement was quite handy for me.”

Also benefiting from the extra three weeks training following the postponement of the nationals, Katherine Camp showed signs of returning to her best to secure a hat-trick of national women’s 800m title with an emphatic display.

Camille Buscomb, attempting the ambitious 800m, 1500m and 5000m treble here in Hastings, took the field through the bell in around 63 seconds but down the back stretch Camp made her winning move by surging to the front.

As Buscomb (WBoP) started to fade, Rebekah Greene (Otago) moved into second but Camp was unstoppable and extended her lead to stop the clock in a season’s best and fastest time by a New Zealander this year of 2:06.50. Greene secured silver some 1.10 secs further back while Buscomb earned the reward of a bronze medal in 2:08.33.

Camp, the defending champion, had only returned to training in mid-December following a stress fracture but was elated with the win.

“I’m very happy,” said Camp. “I was pretty nervous coming into it because I’ve had an inconsistent season. I just had to go and try and enjoy it as much as I could and trust my speed and the extra three weeks did help.

“At the start of the season I was lacking confidence but that was only because I hadn’t done the work. I’m just glad it has worked out today.”

James Preston added his name to the roll call of former national men’s 800m champions such as Sir Peter Snell and Sir John Walker with a beautifully controlled front-running performance.

The 23-year-old Wellington athlete took the led from the outset and hit the bell in a swift 52 seconds tracked by the chasing Dominic Devlin.

With 200m remaining the tenacious Aucklander was still within striking distance only for the long-legged Preston to slowly extend his lead and pull out the race winner in a time of 1:48.49.

“I have mixed emotions (on winning the title having raced Brad (Mathas, the multiple winning New Zealand champion who set a personal best of 1:46.01 in Australia earlier this month) over the last few years and I wanted to race him again because he’s been the top guy for so long.

“I just tried to go and run a quick time. I put a big kick down to win my first national senior title.”

Earlier, Courtney Ruske secured her third women’s 3000m race walk title with a rock solid performance in 14:28.74. The 26-year-old Cantabrian, who last won this title six years ago, finished comfortably clear of Wellington’s Danielle McLean in silver (18:01.38). The podium was rounded out by Sarah-Amy Rhind (Auckland) 19:33.05.

Quinn Hartley (Southland) capped a memorable few weeks by adding the New Zealand U20 men’s long jump title with a best of 6.74m to the national U17 record he set earlier this month.

Will Anthony (Wellington) produced a masterful front-running display to destroy the opposition and take out the men’s U20 5000m title in a swift 14:40.76.

Meanwhile, Hannah Gapes (WBoP) executed a similarly impressive performance from the front to take victory in the women’s U20 5000m final by obliterating her previous personal best by more than half-a-minute to stop the clock in 16:47.56.

In the women’s U20 discus Kaia Tupu-South (Auckland) unleashed a season’s best 52.50m to strike gold and the classy James Harding (Auckland) added the men’s U20 title in 1:51.63 to the U18 title he snared at last year’s nationals.

Gifted 16-year-old Nikau Peipi produced an unforgettable morning to take out national F46 records in both the javelin and long jump. The Tasman teenager opened his account by smashing the javelin mark, hurling the 800g implement to a distance of 36.64m to bank U17, U18, U19, U20 and senior New Zealand records. Later in the para long jump, he sailed out to 5.33m to secure the same combination of records.

Also in record-breaking form in the para javelin was Ben Baines (Otago) who extended the men’s F37 national record to 33.44m.

World 2019 World Para Athletics T36 200m silver medallist Danielle Aitchison showed her quality to sprint to a blistering 100m time of 13.76. The mark was 0.09 quicker than her national record mark but the wind at +2.2m.s was just over the allowable limit for record purposes.

The action in the Jennian Homes New Zealand Track and Field Championships continues this evening and throughout Saturday.