The 57th edition of the Rotorua Marathon this Saturday will throw up a myriad of stories and personalities motivated to participate for countless reasons. We focus on a trio of competitors taking to the start line to achieve a range of different goals.

Twenty years on from making his Rotorua Marathon debut, Graeme Tindall will achieve the milestone of his 300th marathon on his return to the historic event on 8 May.

The Masterton-based accountant will become just the fifth New Zealander to achieve the staggering feat of endurance after he completed his 299th marathon at the T42 Central Plateau Marathon last weekend.

“I was never able to manage 100km-plus training weeks to give myself the best chance of achieving sub-three-hour marathon times, instead I became a regular marathon participant who’s only goal is to finish,” he explains of his journey to the milestone.

“It will be nice to join the small group of New Zealanders to reach 300 marathon completions.”

Graeme started running to stay fit and handle the stress of study during his first year at university. He entered his first half marathon in 1990, however it was ten years later that he made his full marathon debut in Auckland.

“I am not a fast runner, but I found it addictive trying to run faster than previous times or whatever goal I set myself.”

He competed in his second marathon in Rotorua the following year and his curiosity to run regular marathons quickly built momentum.

Giving him an excuse to travel, he has completed 125 overseas marathon in ten countries. He has competed in all six marathon majors – Tokyo, Boston, London, Berlin, Chicago and New York – and was running the 2013 Boston Marathon when the terrorist bomb exploded, which led to the death of three people.

“I only had a short distance to finish when the bomb went off,” he recalls.

“I went back in 2014 to finish the marathon. The other large overseas marathons, maybe a thing of the past, also provide memories.”

In the future, Graeme has some other goals to achieve. He is currently sitting on 199 completed half marathons so would like to knock off number 200 at some point this year. He has also finished 89 Australian marathons, so a future goal would be to complete 100 marathons on both sides of the Tasman.

Yet for now he has his eyes fixed on joining a small but special group of Kiwis to achieve 300 marathons and the 49-year-old sees it as fitting he will attempt the milestone in Rotorua.

“It is both 20 years since my first Rotorua Marathon and Rotorua is also the marathon I have completed the most times (at 18). All going well, it will be nice to do my 300th marathon there.” 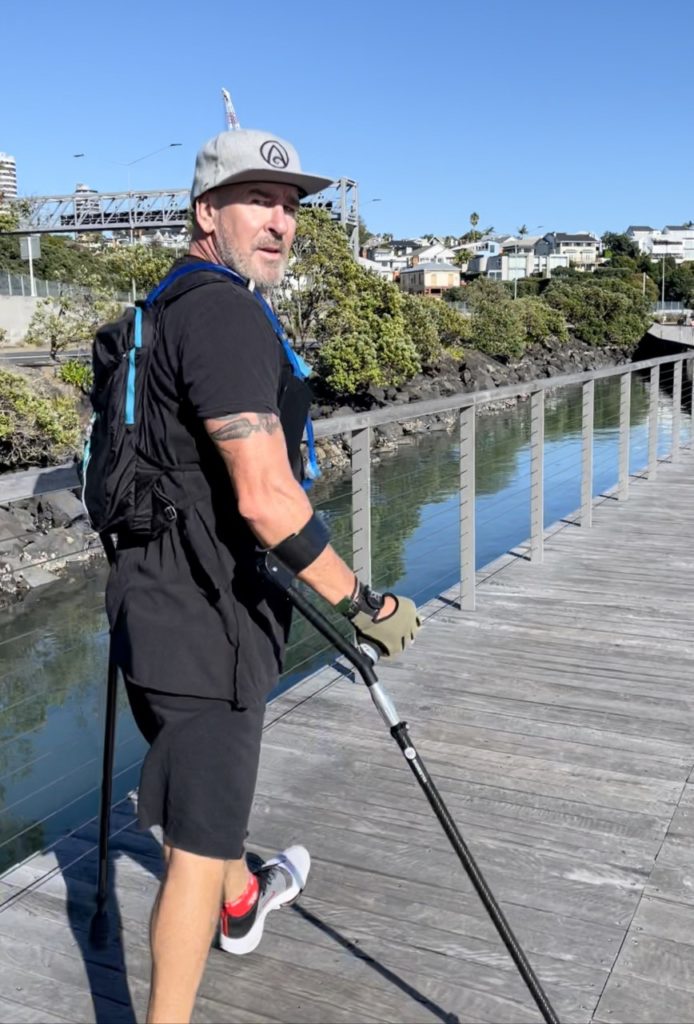 Ōtorohanga District Mayor Max Baxter is attempting to complete a sub-three-hour half marathon on crutches as he takes to the streets for the 2021 Rotorua Marathon next month.

Max, 56, who has no pulse below the left knee, is making the brave bid in an effort to match his performances in his younger days as a sub-three-hour marathon runner.

“I figured I would target three hours as it created another level of challenge,” he explains. “A three-hour marathon is an admirable target for most runners so why not attempt half of that?”

Back in 1991 Max ran his debut marathon in Rotorua, posting a highly respectable 3:13 for the 42.2km distance. However, in the wake of that performance he discovered he had trouble walking on his left leg and after going to the doctors he was diagnosed with a femoral artery failure, which resulted in no pulse below the left knee.

Max underwent fem/pop bypass surgery to fix the problem and he went on to run three sub-three-hour marathons, including a fastest of 2:49 in New Plymouth.

However, eight years ago he ran into difficulties when the graft used to fix the issue occluded – as vein grafts of this size have a limited patency.

“It suddenly meant in fine weather, at a brisk walk, I couldn’t walk 200m,” he says. “Therefore, everything in my working life changed.”

In more recent times, Max has considered returning to the Rotorua Marathon, so set a sub-three-hour half marathon goal.

He acknowledges it is a challenge planting the crutches at pace but feels he is up to the challenge.

“My training clearly indicates I can run a sub-three-hour time,” he says.

“It will mean a lot to achieve the goal and I hope 30 years after running my first marathon, I can provide motivation for others to overcome challenges and set goals.” 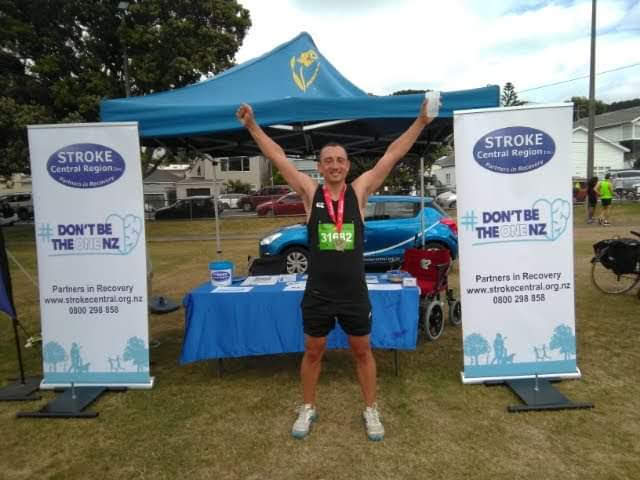 Lee Pownall has always wanted to make a difference and the Paraparaumu-based runner hopes by entering the 2021 Rotorua Marathon he can impact not one but two charities close to his heart.

The 37-year-old dad-of-three works as the Stroke Central CEO and hopes to raise awareness of stroke prevention by raising funds on his marathon debut.

Lee will also be committed to raising money for the Whirlwind Men’s Group in Kapiti – a group he personally tapped into after experiencing mental health challenges.

“Since the age of six, I always wanted to run a marathon and, being one of the official charities (Stroke Central), I saw it as a great opportunity to take part and give it a go,” he says.

“I opted for two charities because I feel there is an opportunity for a collaboration. Stroke and mental health go hand-in-hand both from a prevention and a recovery point of view, so they are relevant to each other. They cross over and often prevention from one can help another.”

The Stroke Prevention campaign “Don’t be the One” is focused on promoting a healthy and active lifestyle through events. Meanwhile, Lee became involved in the Whirlwind Men’s Group three years ago following a breakdown in his marriage.

“It’s a really great group of men of all backgrounds and life experiences and a great example of how talking and listening can really help people,” he explains.

“I often felt others were going through far worse situations than me but it did help me at the time I needed. I recommend it to anybody going through struggles or difficulties to go to a group such as this. There are people who can help and I’ve made friends going to the group.”

Training for his first marathon has helped improve his mental well-being, reducing work stresses and putting Lee “in a good zone”.

Aiming for a sub-five-hour time, Lee knows running a marathon will be emotional but is looking forward to the experience and making a positive impact.

“I’m a big believer that I was put on this earth for a reason,” he says.

“And I feel that if I’ve been through something or have a passion for something then I will follow it and do my best to make a difference for other people.”