When the starting gun fires at the International Track Meet at Nga Puna Wai Sports Hub in Christchurch on Saturday 6 February, perhaps few will understand the significance of the occasion quite like event promoters Leyton Tremain, Craig Motley and Paul Coughlan.

During its 12-year history, the event has experienced record-breaking performances and an 11th-hour cancellation rooted in tragedy which has subsequently required agility, innovation and great perseverance to continue to make the event work.

Yet, if the event represents anything, it is the deep-seated passion and will of the organisers and promoters who continue to successfully adapt to best serve the interests of the athletics community – even when faced with the most demanding of challenges.

So when the event finally returns after an 11-year absence as a traditional athletics meet on an all-weather track next Saturday, the moment will understandably mean so much for Leyton, Craig, Paul and their team.

“Organising this event has been a real labour of love and there is an immense amount of pride in what we’ve managed to achieve,” Paul says.

“There is a real excitement it is coming back this year to once again be staged at a quality all-weather facility.”

“We are enthused about introducing the new generation of athletes to International Track Meet.”

The genesis of the Christchurch ITM can be traced back to a speaking tour in 2008 given by Nick Willis, who earlier that year had won Olympic 1500m bronze (later upgraded to silver) at the Beijing Olympics.

With a paucity of international meets in New Zealand at that time and Willis keen to showcase his talents to a domestic audience, the perfect storm evolved.

Craig Motley had several months earlier pitched a ‘big meet’ to Athletics Canterbury which had been met with tentative approval and a date identified. Nick and Craig both agreed an international standard meet was missing.

Unbeknown to the others, Mark Reid and Leyton Tremain, who were bringing star athletes to the local Pier to Pier (beach) Series to inspire kids, shared similar sentiments.

With their combined passion, Nick’s instant pledge of support and Leyton’s larger vision, they quickly pulled together a group. The eight mainly former athletes with a range of business skills and contacts included Beijing Olympic heptathlete Rebecca Wardell.

“We remembered the 1990s and the international meets such as the Smokefree Series, Marley Games and legendary Robin Tait Classic, which took place here in New Zealand,” Paul explains.

“We recalled how as younger athletes we were given opportunities to develop at these meets and set PB’s. We thought it would be a great idea to organise a meet to give back to the sport and help inspire the next generation.”

The marquee event was the head-to-head mile clash between Willis and England’s Andy Baddeley with the target Sir John Walker’s New Zealand resident record of 3:50.6.

Unfortunately, injury to the two main protagonists denied the eagerly anticipated showdown between the pair. But, in their absence, Australian Jeff Riseley set a stadium mile record of 3:54.54 to defeat his compatriot Collis Birmingham in a thrilling duel.

Yet the meet was always about creating opportunities and the 2009 mile race in which Hamish Carson competed represented exactly that, according to Paul.

“Hamish competed in that mile race as a young lad but was spat out the back in the mile and finished last,” he recalls.

“But 12 months later he came back and set a big 1500m PB of 3:44 – a performance which gave him an opening to run in Europe. Some six years later he went on to represent New Zealand at the Rio Olympics in the 1500m.”

Despite the on-track success of the first two ITMs, finances were tight and with the commercial risk Athletics Canterbury were understandably reluctant to take on the meet for a third year. At that point, the key individuals – Paul Coughlan, Leyton Tremain, Craig Motley and Mark Reid – put in some of their own money to cover any missing costs and established their own organisation.

The team of four handled the promotion and commercial aspects with Athletics Canterbury focusing on the technical aspects. Three independent trustees in John McBrearty, Mike Rondel and Richard Sprott were brought on board and the International Track and Field Trust was created that still owns the event today.

The trust was set up to create a structure that is hoped will be intergenerational. New Zealand has an excellent history of staging quality international athletic events but the trust feels they relied on individuals and were not successful at transitioning to the next generation.

The third edition of the event slated for 26 Feb 2011 promised to be the biggest and best to date. It was proposed that Willis would receive his upgraded Beijing Olympic silver medal (following the disqualification of gold medallist Rashid Ramzi) from 1976 Olympic 1500m champion Sir John Walker. Willis was set for a thrilling mile duel with American star Alan Webb while Galen Rupp, a future London 2012 Olympic 10,000m silver medallist, planned to target the US 10,000m record.

But, as history tells us, just four days out from the meet everything changed following the earthquake which devastated the city and killed 185 people.

With the city ravaged by the disaster and QEII Stadium irreparably damaged, the meeting was immediately cancelled.

“It was the greatest meet that never happened. I had to ring Galen Rupp, who was in Australia at the time, and the other athletes to tell them not to come to Christchurch,” Paul remembers.

“Obviously, priorities switched from a track meet to the wellbeing of your family. But we put a huge amount of emotional energy into making that meet happen. It was gutting when we quickly came to the realisation that it was not safe for the athletes to come to Christchurch.

“The meet hotel was set to be the Grand Chancellor. That hotel was badly damaged by the earthquake and became a bit of a poster image of a broken city. If the earthquake had happened four or five days later some of the world’s top athletes would have been in that hotel.”

To help raise funds for the Christchurch earthquake appeal, a meeting was arranged in Wellington at which Willis was presented with his Olympic silver medal. But, given the lack of an all-weather track in the ‘Garden City’, the ITM faced an uncertain future.

Paul and his team sent around a proposal to other event organisers in an effort to keep the concept going. But, after receiving strong feedback that Christchurch was best equipped to retain the meet, the 2012 edition was to be held on the 331m grass track at Christ’s College.

“The main reason we looked at the grass track is that it was a good way to commemorate the 50th anniversary of Sir Peter Snell’s world 800m and 880yrd records, which were set at the grass track at Christchurch’s Lancaster Park in 1962. Christ’s College was a nice, intimate venue and I couldn’t speak highly enough of the school in supporting the event.

“It was the first international sporting event to be held in Christchurch since the February 2011 earthquake and the public came out to support it in droves. There was a queue over 100m long, stretching down the street, to get in which is almost unheard of for a track and field meeting.” 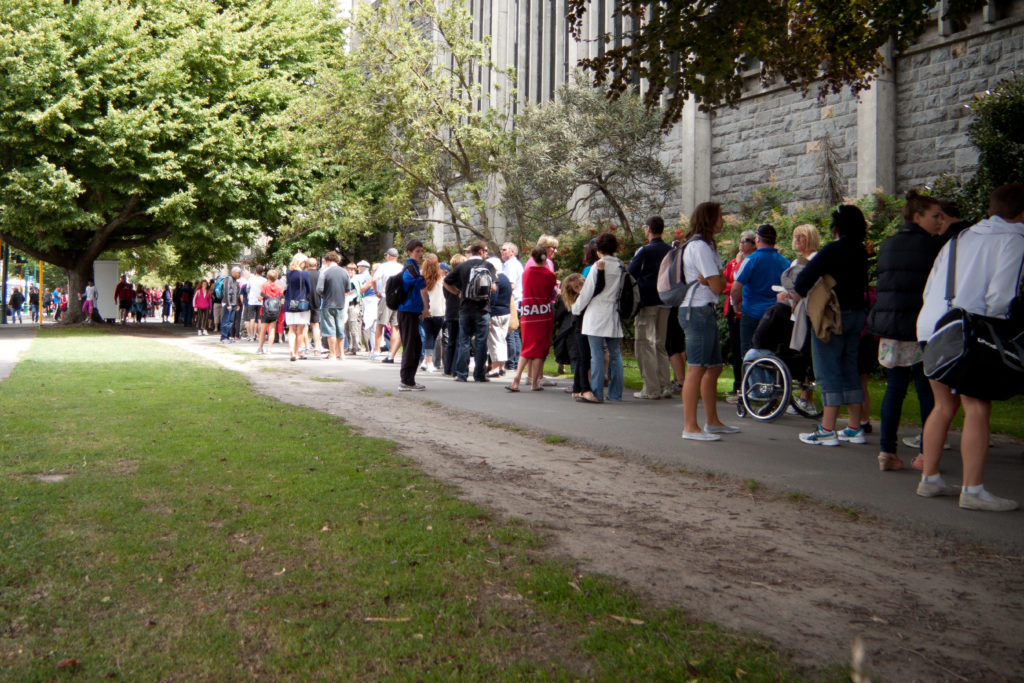 The queue to get into Christ’s College for the 2012 event stretched down the road.

For three straight years, the event was successfully held at Christ’s College and was perhaps best known for showcasing the field events, particularly the shot put and the rising talent of Tom Walsh.

But in 2015 the meeting was to undergo another makeover inspired by the Zurich Diamond League, which held its shot competition in the city’s main railway station.

Coupled with Walsh’s rising status in the sport, a series of street meets billed as The BIG Shot were organised in Christchurch. The events provided some world-class competition, highlighted in 2017 by a meet record of 22.05m set by America’s Olympic champion Ryan Crouser.

The International Track Meet has won the Canterbury Sports Awards Outstanding Event of the Year twice, in 2014 and 2016. It was also a finalist in 2013 and was narrowly beaten in 2012 by the ISPS Handa New Zealand Women’s Golf Open.

Today, Leyton, Craig and Paul continue as the engine room making it happen with incredible support from some excellent people who add a huge amount of value. Crucial commercial support from Spectrum Print and 1 Group lifts the professionalism.

Following the opening of the impressive all-weather facility in Nga Puna Wai first officially used to host the 2019 Jennian Homes New Zealand Track and Field Championships, it was time for a change of emphasis.

Last year, the marquee event of the domestic season returned to the city and with this in mind the trust decided to focus their effort on reviving the ITM meet for 2021 with Nga Puna Wai set to host the latest event on 6 February.

The elephant in the room is the fact that the 2021 edition will feature no overseas athletes due to the pandemic, so did they consider changing the title of the event from international?

“The irony of celebrating our full return one decade on from our city’s worst natural disaster amid a global pandemic is not lost on us! The commercial impact is potentially bigger than the borders. It is a very frustrating situation and we agonised over whether we should still use the name,” Paul explains.

“We decided, however, that we still had some great international athletes competing at the meet, they are just all from New Zealand, so we retained the title.”

This year’s event at Nga Puna Wai will be free admission for spectators, with donations to the International Track and Field Trust greatly appreciated.

“ITM has always focused heavily on creating a strong atmosphere trackside with large crowds, this is one of our key points of difference,” Paul says.

“The decision to make entry free is two-fold, we’re hoping for a sizeable crowd and the quality field will ensure the Christchurch public will be treated to a hugely exciting event. The trust wishes to thank the public for their support and recognises Christchurch has had a tough journey over the last decade.”

The 2021 International Track Meet, billed as One Decade On in reference to the lost event at QEII in 2011, will celebrate the achievements of the trust and athletes to date.

So how proud will the team feel when the event – in which the inspirer, Nick Willis, now serves as patron of the trust – gets underway?

“When I look back over the things we’ve achieved and the total revenue we’ve brought into the sport, it is in excess of half a million dollars,” Paul says.

“We’ve had kids compete in under-10 relays at the meet more than ten years ago come through the system and go on to compete as juniors and under-23 athletes, and a couple of athletes have come through that development pathway and established themselves as elite athletes. For us, that is an awesome feeling.

“The international stars will return once borders are properly re-opened. We are very excited about what we can put on, both this year and in the future.”