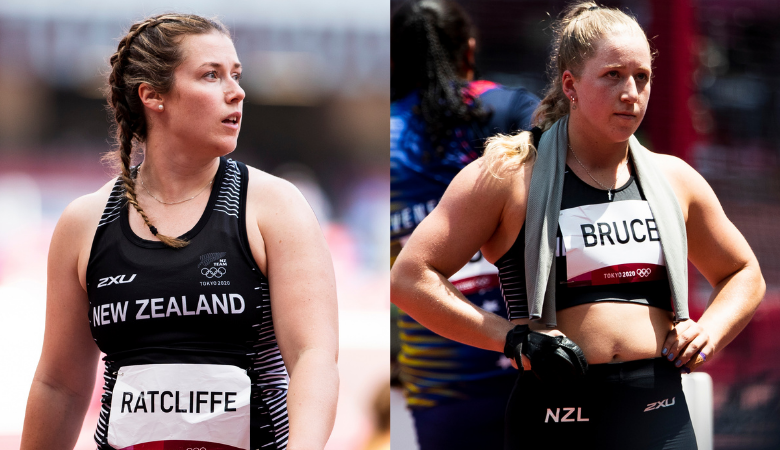 The 2018 Commonwealth Games champion looked relaxed as she entered the circle for her first throw in qualifying group A, her international experience paying off as she threw 73.20m, just shy of final automatic qualifier of 73.50m.

Julia’s second round effort of 68.89m was followed by a debrief with her coach and Dad Dave Ratcliffe, before a third and final throw of 70.87m. While ending in a comfortable fourth position in qualifying group A, as she hadn’t met the automatic qualifier it was a long wait for qualifying group B competitors to complete their throws, before the Hamilton City Hawks club members place in her first Olympic final was confirmed.

Julia said it helped to brush off the nerves with a strong first throw: “First throw I think for everyone is to just get one in, you’ve just got to clear those nerves because everyone is a bit shaky going in. The first two throwers fouled their throws, which kind of puts you on edge a bit watching that, so I was glad to get that first one in just full stop, so the fact it got really close to that automatic qualifier I knew from previous results I’d be pretty safe.”

Julia said it was great to back out on the international stage: “It was so much fun. I haven’t been competing internationally since 2019 so it’s just so awesome to be in a massive stadium even if there’s no people there. We’ve got our Kiwi contingent, the physios and Dad out there, so really cool, just the big stand around you just gives that atmosphere, they had the music pumping, it was a bit of a party in there, so good fun.

“So I ended up fourth overall and that was my best throw and after that just trying to go for it a bit and have some fun out there and that’s alright, the last two throws weren’t as good, Dad’s in the stand and he’s got some technical cues for me I’m sure when I debrief with him and that’s some learnings we can take through to the final, but the circle was really smooth and fast, so it was just awesome to be out there.”

Overall, Julia was happy with her first taste of Olympic competition: “That’s my furthest international throw by 2-3 metres, it was awesome to be able to put that out there. I know I have got more in me, definitely, and so looking forward to see what I can put down in the final.”

Fellow Kiwi hammer thrower Lauren Bruce was unable to deliver her best in qualifying group B, but gained invaluable experience from her Olympic debut, telling Sky Sport of some words of wisdom shared by a fellow competitor: “As one of the girls out there said before, you’ve got World Champs next year, Comm Games, another Olympics in three years’ time, said Lauren. “We’ll go back home and take the break, and get ready to go again.”