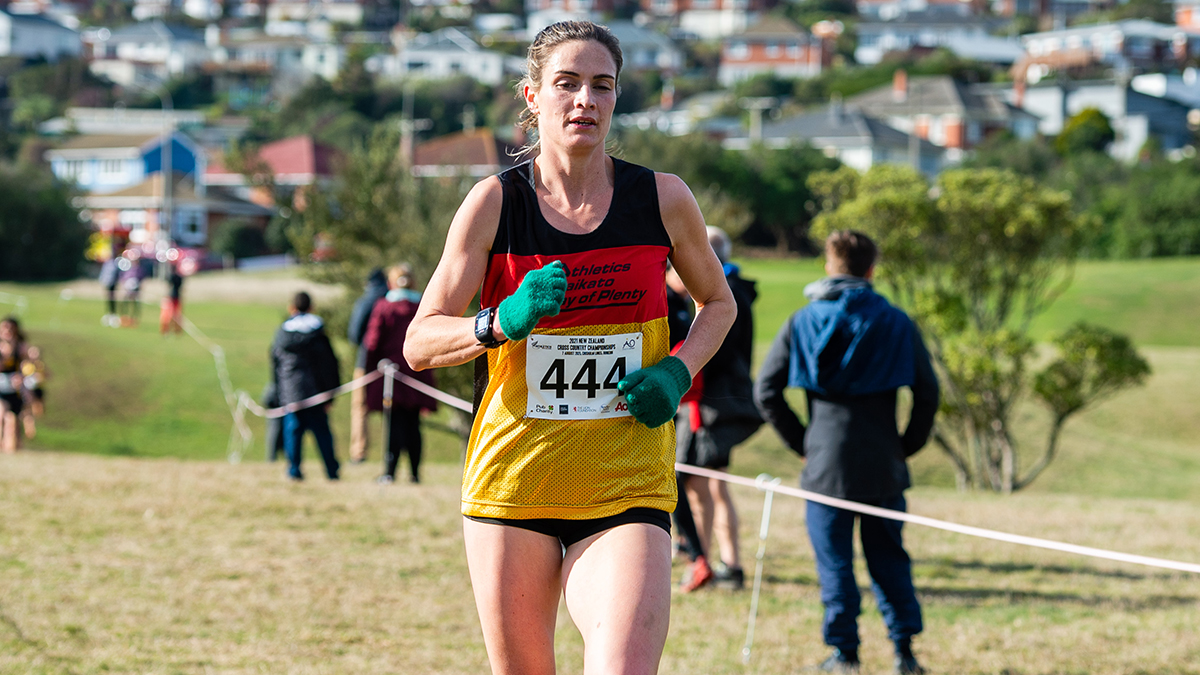 Neither injury or health struggles have stopped Kerry White, who will take to the start line in defence of her senior women’s title at the New Zealand Cross Country Championships in Taupo on Saturday brimming full of confidence.

Facing the challenge of a heart arrhythmia and repeated stress fractures would have flawed a less resilient athlete, but through it all her passion for the sport has remained undimmed and thanks to the right training recipe the 28-year-old Papamoa-based athlete is currently in the form of her life and relishing the prospect of racing at Spa Thermal Park.

“I’ve run there a few times before (at North Island Cross Country Championships), it is a good course with lots of hills it will be interesting to race over the 10km distance there,” explains Kerry. “It will be tough, lots of the girls in the field have different strengths, some are from a background of running longer distance races others more middle-distance. I personally like the tough hills, I handle them well. It will be interesting to see the outcome.”

Raised the middle of three siblings on a dairy farm in Te Aroha, Kerry spent four years on a US scholarship at the University of Wyoming. While she fully embraced her Stateside experience, she admits during her four years she “neither improved nor got worse” but struggled with a succession of stress fractures, which she says may have been prompted by excessive mileage in training.

Returning home in 2019 she relocated to Papamoa, where she works as vet nurse, yet her world was to suddenly change the following year when the Hamilton City Hawks athlete collapsed while working and sustained a bad concussion.

Concerned at the incident after medics ran tests they discovered a heart arrhythmia – known as an irregular heartbeat.

“I spent a lot of time trying to ease back into training and mentally that was the hardest part,” explains Kerry. “I didn’t want to push it too hard because I did not want it to happen again. It is not easy to hear that there is something not quite right with your heart, but it became a little easier when doctors told me an irregular heartbeat is quite common.”

Advised not to take medication to treat the condition, because she is still very young, she undergoes yearly check-ups and has learned to successfully marry her training and living with the condition.

“During certain sessions I can feel my heart starts to race and I think, okay, I need to back off a bit and wait for my regular rhythm to return,” she explains. “I’ve come to learn the signs and when to back off. The irregular heart rate does come on more often when I’m fatigued and run down, which is a good cue for me to ease up.”

Coming to terms with the condition – which she has subsequently found to be common in her family – Kerry sought to take the next steps in her athletics career and shortly after finishing sixth in the 800m and ninth in the 1500m at the 2021 Jennian Homes New Zealand Track & Field Championships she connected with Christchurch-based coach Maria Hassan.

The switch has helped reinvigorate her career and just several months after the pair started working together, she claimed an unexpected gold medal at the New Zealand Cross Country Championships in Dunedin.

So why does she feel the coach-athlete relationship has developed so successfully between her and Maria?

“When I was based in the US my training was quite mileage based, and I don’t think I responded very well to that,” adds Kerry. “I’ve always responded to a moderate mileage with high intensity and Maria’s training, which is very structured, is geared more towards my strengths. The style of training I do now is similar to what I did at high school, just with a lot more volume. I believe this is why everything has started clicking.”

Training an average of between 60-70km a week she enjoyed “a really special moment” to clinch gold at the 2021 New Zealand Cross Country Championships by a 24-second margin from Anneke Grogan.

Specialising more as an 800m runner on the track might confuse some, particularly as arguably her greatest success came last over the 10km distance at national cross, so how does the former national U20 800m gold and U20 400m silver medallist explain this?

“I have had a lot of success with cross country, but I also really do enjoy the 800m. It is short and sharp. Maybe in the future I need to run some longer distances run more 1500s and have another crack at the 5k. I am starting to run longer distances.

“I feel I have good speed and endurance and I think I get this from growing up in Te Aroha on the mountains and the trails, which I think helps build that toughness for cross country.”

Believing Spa Thermal Park will present a similar challenge to the course at Chisholm Links Golf Course, where she triumphed at last year’s National Cross, she also has half-an-eye on competing at World Cross Country Championships in Bathurst, Australia.

But before that, she faces the defence of her title in Taupo where she is gunning to defend her title.

“If I can take the win again,” explains Kerry, “that would be awesome.”