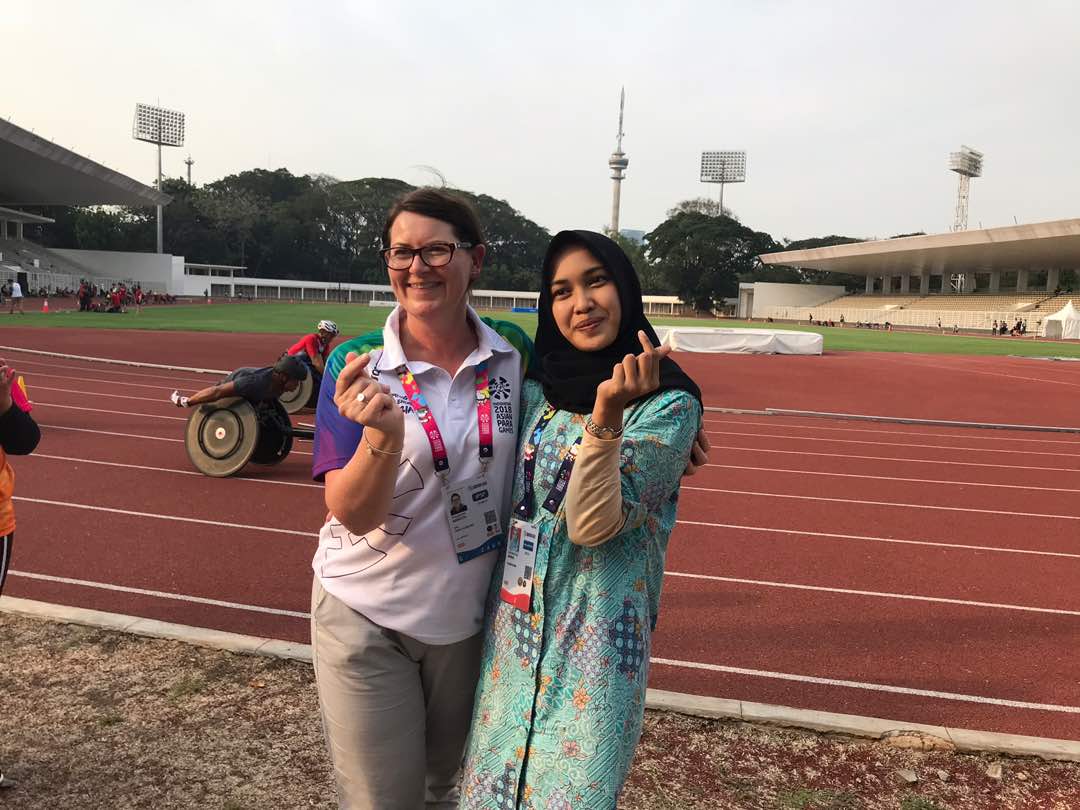 Rebecca Foulsham pictured (left) with a member of the organising committee at the Asian Para Games in Jakarta.

Describing her role as the recently appointed World Para Athletics Head of Classification as “a huge honour” proud Kiwi Rebecca Foulsham has a huge responsibility for ensuring the structure for Para athletics competition is implemented in a fair and equitable manner.

The position comes with its challenges but given Rebecca’s vast wealth of knowledge gained over the past quarter-of-a-century, there and few better equipped with the skills to match the brief and provide reassurance for Para athletes around the globe.

“It was humbling to be asked to be Head of Classification because I know many of my colleagues could have also stepped up to the role too,” explains Rebecca. “At first, I was hesitant to take on the position, but I ultimately decided to accept because of the support I received from the other classifiers and my management team.

Raised in Marton in the Manawatu, physiotherapist Rebecca was introduced to Para athletics through her husband, Gavin Foulsham, a wheelchair racer and Paralympian at the Barcelona 1992 and Sydney 2000 Games. Enjoying the speed and exhilaration of wheelchair racing, her direct involvement began after Paralympics NZ became aware of her background as a physiotherapist, and she was asked back in 1997 if she would like to assist in their work in the field of athlete classification – the process through which athletes are graded according to their level of disability.

“I had no idea what classification was but suddenly I was thrown into this new world,” she explains.

Her ascension was rapid. At the 1998 World Para Athletics Championships (then known as the IPC Athletics World Championships) in Birmingham, England she served as New Zealand team physio and reprised the role at the 2000 Sydney Paralympics. Throughout this period, she soaked up knowledge like a sponge and Rebecca admits she was fortunate to have the support of an amazing teacher and classifier, Australian Dr John Bourke, during her formative years in Para sport.

“He really got me up to speed and it was John, through his connections, who got me first involved into the international world of classification,” adds Rebecca.

After giving birth to her two children in the first half of the Noughties she took some time away from classification only to later take up a role as an International Medical Classifier 11 years ago shortly after relocating to the current base in Hawke’s Bay after a period living in Melbourne.

With the classification system undergoing significant change at that time, the new role presented an ideal opportunity to implement her skills, but what does the role entail?

“A medical classifier is typically a trained physio or doctor, and their role is to use their clinical skills to assess athletes with impairments and disabilities, particularly those with neurological and muscular skeletal and spinal cord injuries,” she explains. “It is not simply about using those clinical skills to assess somebody’s medical condition but to understand the relationship between the medical condition and the skill required for the sport. This often requires lots of clinical knowledge and movement analysis.”

Working alongside a technical classifier, often from a sports science background, ‘the team’ then work together on determining an athletes’ classification. Rebecca insists a good knowledge of Para athletics coupled with a good relationship with the athletes is critical in the classification process because the role is not without its challenges, particularly when delivering news which might not always be received well by the athletes.

“Usually things go to plan for an athlete but sometimes they don’t and an athlete can be disappointed by their classification category,” she explains. “However, my philosophy is to always be as open and as transparent as possible and make sure athletes have every opportunity to ask questions,” she says. “When delivering the news it is about having empathy and making sure that you are aware of the rules and that the athlete understands why they are being given a particular classification.”

Depending on the type of disability, Rebecca explains athletes are classified a differing amount. Amputees, for example, are usually only required to be classified once in their career. For others with a neurological condition – like cerebral palsy – which can be changeable, they may require classification every two to four years.

Travelling up to six overseas competitions a year to carry out her role, the demands of family life and other commitments can be intense.

So what is the buzz and thrill she gets out of her work?

“I really enjoy that athlete interaction,” says Rebecca, who four years ago became Athletics NZ Para Athletics Classification Co-ordinator. “I really enjoy working with the teams overseas, particularly those teams that have little access or knowledge of classification resources. Supplying information to help educate and assist national Paralympic committees and the athletes to learn more about classification is very rewarding. But I also enjoy the travel. To live in the beautiful Hawke’s Bay but also be given the chance to travel the world and make a difference is great.”

While the role is a privilege, Rebecca admits the challenges are multi-faceted.

“The rules around classification are extensive and my role has a responsibility for the direction, administration and co-ordination of classification. The challenge is maintaining a strong relationship with Para athletes and the management team. There are issues in terms of where classification opportunities are held, classifier availability and in some cases the logistics behind how some national teams can get an athlete classified.”

Rebecca also admits as Para athletics is the most participated Para sport expectations from multiple stakeholders are high. She admits high expectations are fine, but the resources at her disposal don’t always meet those expectations.

“That is perhaps our biggest challenge,” she says. “There is a lot we could and should do and we are constantly living within our priorities.”

Rebecca admits that throughout her time in the realm of classification she has been blessed to receive the support of numerous coaches and athletes in expanding her knowledges and cites Athletics NZ Lead Coach Para Athletics Raylene Bates and Paralympian and Athletics NZ Programme Coach Throws John Eden as being invaluable sources of knowledge and expertise.

But what are some of her favourite memories as a classifier?

“I have huge admiration and respect for New Zealand athletes,” she admits. “Athletes like Holly Robinson (Paralympic F46 javelin champion) are blazing a trail. Outside of New Zealand, two Syrian athletes come to mind. They arrived to be internationally classified at a competition in South Korea shortly after the civil unrest in Syria. The lengths they had gone to get out of Syria and compete at an international competition was incredible. It shows the strength of what athletes can do if they want to compete. To classify them felt like a huge honour.”