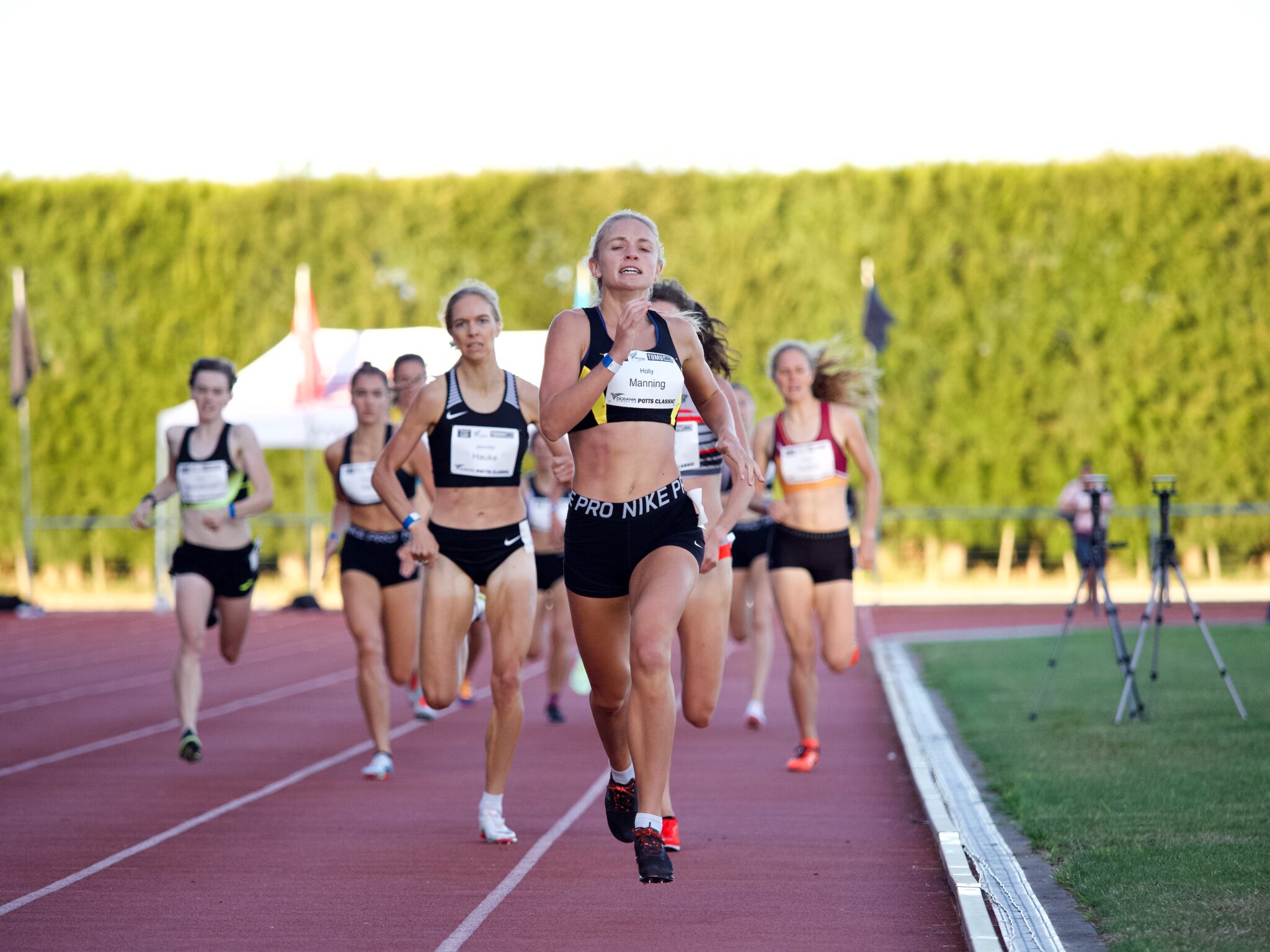 The first three in last year’s Sylvia Potts Memorial women’s 800m return to battle out the feature event at the annual Potts Classic meeting at Mitre 10 Sports Park in Hastings on Saturday.

Holly Manning scored her first win in the event in 2:06.23 will line up with twice previous winner Katherine Camp and Jennifer Hauke, who placed third in last year’s event in 2:07.50.

Manning is the national champion and has run 2:03.76. Camp is a three-time New Zealand champion with a personal best of 2:02.63.

The talent-stacked field also includes Angie Petty, seven times national champion and nine times winner of the Sylvia Potts Memorial race. Petty with a best of 1:59.06 from 2015 holds the race record of 2:03.43 – set in 2016.

Connor Bell will have his sights set on the New Zealand allcomers discus record of 66.81m set by two-time former Olympic champion Virgilijus Alenka of Lithuania on the North Shore in 1999, after his record-breaking throw on the ground on Wednesday evening. Bell with a throw of 66.14m, improved on his own resident record of 64.29m and broke the national record of 65.03m set by Ian Winchester in California in 2002.

Nick Palmer national bronze medallist with his previous best shot put of 19.04m was out to a fresh PB of 19.16m on Wednesday. He will be up against 2018 national U20 champion Ryan Ballantyne who has a distance of 19.85m to his credit. Maddison-Lee Wesche, sixth at the Tokyo Olympic Games and bronze medallist at the Birmingham 2022 Commonwealth Games will highlight the women’s shot put.

The women’s discus will have an international flavour with Commonwealth Games silver medallist Jade Lally of Great Britain and Taryn Gollshewsky of Australia, who was fourth at the Games in Birmingham, competing alongside Kiwi throwers Tatiana Kaumoana, Savannah Scheen and Natalia Rankin-Chi Tar.

Tiaan Whelpton will welcome his return to Hastings where last year he equalled Joseph Millar’s New Zealand resident 100m record of 10.18. He will be up against five times national 100m and 200m champion Joseph Millar, Tommy Te Puni, Hamish Gill, Cody Wilson, Hayato Yoneto, Joe Dolphin, Zachary Saunders and Joshua Hawkins in the 100m. Miller, Te Puni and Hawkins will also contest the 200m with Hawkins going for a treble – also in the 110m hurdles. Grace Wisnewski national U18 300m hurdles champion will start in the 100m hurdles.

Rosie Elliott, who has a best 400m of 52.59 from winning the national title in Hastings, returns to the for the 100m and 400m. Georgia Hulls, Livvy Wilson, Symone Tafunai, Portia Bing, Talia Van Rooyen, Chayille Collette and Brooke Somerfield are in the 100m. Bing, Isabel Neal and Mia Powell will provide competition for Elliott in the 400m.

James Preston who went close to the meeting record of 1:48.06 in the 800m last year with his winning time of 1:48.38, returns. Holding a best of 1:45.30 in Germany last June Preston should erase Australian Alex Rowe’s 2017 record. Australian born Jared Micallef who has Maltese citizenship, will compete in the 800m. His best of 1:46.94 was set in the same race as Preston’s performance last year.

The Hastings ground lends itself to top pole vault results in the past. Olivia McTaggart, fourth at the Birmingham Commonwealth Games, established her best vault of 4.65m in taking gold at the New Zealand Championships in Hastings last March. McTaggart, who recorded 4.51m to win the Pre-Potts meet on Wednesday (18 January), faces off against Commonwealth bronze medallist Imogen Ayris, and returning 2016 Olympic bronze medallist Eliza McCartney. Both Ayris and McCartney cleared 4.21m at the pre-Potts meet. Hannah Adye is also down to compete in the pole vault.

Shay Veitch, Aaron Booth and Lewis Arthur are in the long jump while Briana Stephenson, Mariah Ririnui and Hannah Sandilands compete in the women’s event.

The ground also is kind to the hammer throwers, with Lauren Bruce throwing two of her top three performances in Hastings. Bruce will be out to improve on her best of 73.47m at the venue. Lexi Maples is also down to compete.

Anthony Nobilo will also relish the conducive throwing conditions having added to his personal best in each of his three outings this season improving to 68.95m at Pakuranga on Saturday.

The New Zealand U20 3000m championships are part of the programme with top fields lining up for the honours. Christian De Vaal is favourite for the men’s title. He is the national U18 champion and New Zealand U18 record-holder with a time of 8:10.72 in November and last year in the U20 championship he was third. Alfie Steedman, who impressed at the New Zealand Secondary Schools Championships last month winning the 3000m in 8:27.08 is the national U18 3000m silver medallist. Jamie Mora with a best of 8:28.08 and Elliott Pugh will also be in the mix.

Boh Ritchie will be seeking to add the women’s U20 3000m title to the U20 5km road and cross country titles won last season. Mackenzie Morgan, Hannah Prosser who ran 9:48.52 at the Lovelock Classic, Poppy Martin and Amelia Green will be vying for a podium placing.

***The first Potts Classic livestream featuring the men’s pole vault, and men’s and women’s hammer can be seen from 2.25pm here

The second livestream featuring the remaining events starts from 4.25pm and can be seen here