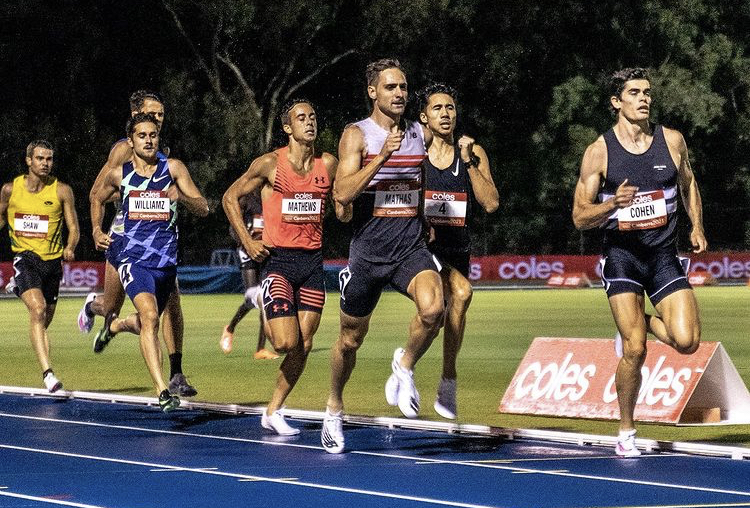 Brad Mathas on his way to second in the 800m at the Canberra Track Classic in March, recording a personal best of 1:46.01.

Australian-based Kiwi Brad Mathas has just enjoyed the best season of his career. Steve Landells caught up with the 27-year-old to reflect on an exciting campaign and his plans for the future.

While events such as the women’s hammer, men’s and women’s shot put and men’s high jump have justifiably taken centre stage during the New Zealand track and field season, the men’s 800m has been another event which has made a quiet but welcome advance in 2021.

Domestically, James Preston has been the dominant force, the 23-year-old Wellingtonian securing his maiden national senior 800m title and boasting an unbeaten record over the two-lap distance.

In the younger age-groups, Auckland middle-distance talent James Harding made a real impact by lowering Nick Willis’ national U-18 800m record courtesy of a blistering 1:48.95.

Yet the New Zealander to have made the biggest two-lap impact this year has been Melbourne-based Brad Mathas, who has just enjoyed his most consistent season to date.

Whanganui-raised Brad has been New Zealand’s pre-eminent two-lap runner for the best part of a decade.

Winning the first of his eight successive national 800m titles in 2012, the international highlight of his career arrived at the 2018 Gold Coast Commonwealth Games when he finished fifth in the final, recording a breakthrough PB at the time of 1:46.07.

After snaring his eighth successive national 800m title in Christchurch in 2019 – his most recent competitive outing in New Zealand – he returned to Australia all set to travel to Europe in the hope of qualifying for the World Athletics Championships in Doha.

However, in April 2019 he suffered a minor hamstring tear which put him on the back foot for the Oceania Championships in Townsville, where he had to settle for bronze in 1:50.47.

“The hamstring injury meant I was always playing catch up,” Brad explains. “I got to Oceania Champs a little underdone and on the day I ran a really poor tactical race, which haunts me to this day.”

He later flew on to Europe but he then encountered issues with his Achilles tendon. He took to the start line for the 800m in Kortrijk in Belgium but in pain failed to finish the race and flew back prematurely to his Australian base with his hopes of qualifying for the World Championships in tatters.

Undergoing regular treatment on the Achilles, the issue could be managed sufficiently to allow Brad to complete training sessions. This continued for many months and in early 2020 he flew out to Boston to make his indoor debut over 1000m.

Competing on a diet of anti-inflammatories, Brad ran 2:23.01 for fourth place. While disappointed with the time, he was satisfied to collect good points from the race – only for any positive thoughts to quickly dissolve.

“Around 15 minutes or so after the race my Achilles was very sore and that injury derailed me for the rest of the season,” he adds.

In an effort to fix the problem, he flew back to New Zealand for treatment last March. HPSNZ doctor Dan Exeter identified severe inflammation on the fat pad between the Achilles tendon and back of Brad’s ankle and a high-volume injection of saline and cortisone was administered into the troubled area.

Within ten days, he was training on the AlterG treadmill and since the injection has encountered no further problems.

“With hindsight I should have addressed the injury earlier,” he admits. “My own stubbornness didn’t help, I was thinking it might go away but it didn’t.”

Following the injection, Brad returned to Melbourne and within days the country went into lockdown following the outbreak of the global pandemic.

Not being able to compete for 2020 was obviously disappointing for Brad but he took last year as an opportunity to build fitness and strength.

Able to train at a track – which was within a 5km radius of his home – he was also fortunate to be able to receive the full support of his coach.

“Justin was at every single one of my sessions throughout the winter and he kept me motivated through July and September when my training partners (Peter Bol and Joseph Deng) were away racing overseas,” he adds. “I lot of credit goes to Justin for keeping training interesting and keeping me accountable.”

Continuing to work part-time from home for the ANZ bank, Brad also coped well with the second near three-month lockdown experienced in Melbourne last year.

“I don’t do a lot outside of running and working part-time anyway,” he explains. “During lockdown I was only really leaving the house to train. Mentally, some people struggle with that but it didn’t really bother me all.”

During the past year, Brad has also slightly stepped up the volume of his training and for three to four weeks last year he recorded 90-100km weeks, marginally up on his typical max of around 80-90km.

He also received a boost to his training group with Bol (PB 1:44.56) and Deng (the Australian and Oceania record-holder with a best of 1:44.21) returning from Europe, joined by a new member to the Rinaldi squad – three-time Olympian Jeff Riseley.

“Jeff joining the group came at a crucial time for me,” Brad says. “I had been training solidly for three or four months but to have him come into the group pulled my training up to a new level.”

He felt he was in the shape of his life late last year but in January, on his first competitive appearance for 12 months, he underperformed in Melbourne, finishing 11th in the 1500m 3:48.67 – more than three seconds shy of his personal best.

“I picked up a little niggle in early January and struggled mentally having flashbacks about how it might derail my season,” he admits. “I struggled to find my rhythm that day and I was pretty disappointed. Justin just said to me, it was your first race in 12 months so you have to put it past you.”

Yet, in his first outing for the season over his preferred two-lap distance, he ran his fastest ever opening 800m time for the season – recording 1:47.81 to place third in Canberra.

The performance offered encouragement to the Kiwi and in early March he slashed more than four seconds from his 1000m PB to record 2:18.97 for second in Melbourne.

Next up, on his return to the Australian capital on 11 March, he trimmed 0.06 from his lifetime best for the 800m, clocking 1:46.01 for second behind training partner Bol.

“It was bittersweet,” explains Brad of the performance. “It would have been nice to have run 1:45 – although at no point in the race did I think I was really moving or that I was going to run a PB. I didn’t go out quick enough and got stuck in traffic. By the back straight on the final lap, Pete was probably 10 to 15m ahead of me and I just focused on closing the gap.

Running his PB with a negative split gave Brad genuine hope he could run even faster and while that did not transpire he still produced some impressive displays for the remainder of the season.

In Brisbane, he recorded 1:46.43 for second behind Bol again before gaining a confidence-boosting victory over his training partner in Melbourne in his final outing of the summer, registering a slick 1:46.31 in the process.

“I went through 400m in 51.3 – which is the fastest I’ve ever done for a first lap,” he adds of his performance in his adopted home city. “I felt awesome and almost ran into Pete at 450m and then again down the back straight. I decided to wait until the home straight to come off Pete’s shoulder. To go through the first 400m in 51 seconds and still feel comfortable has given me renewed confidence moving forward.

“I’ve been happy with my season but I always want more. It would have been nice to run 1:45 but I think I’ve made errors in each race and I just want to iron out those kinks.”

The global pandemic makes the next competitive steps for Brad tricky. He has the potential option of competing in a couple of races in Japan in May or alternatively may opt for racing in Australia in June.

Either way, Brad, who currently sits 41st on the Road to Tokyo ranking lists, has not given up on his Olympic dream.

“Technically, I can be selected but the overarching criteria is that I display top 16 potential,” he explains. “Key to being selected will be showing that I can run 1:45 – and that is the goal.”

In the longer-term, next year’s World Athletics Championships in Oregon and the Birmingham Commonwealth Games are both targets but the Kiwi has one other major career ambition he would one day love to fulfil.

“That is what I’ve always wanted and I think it is still on the radar. It is definitely achievable, I just need to find the right race.”