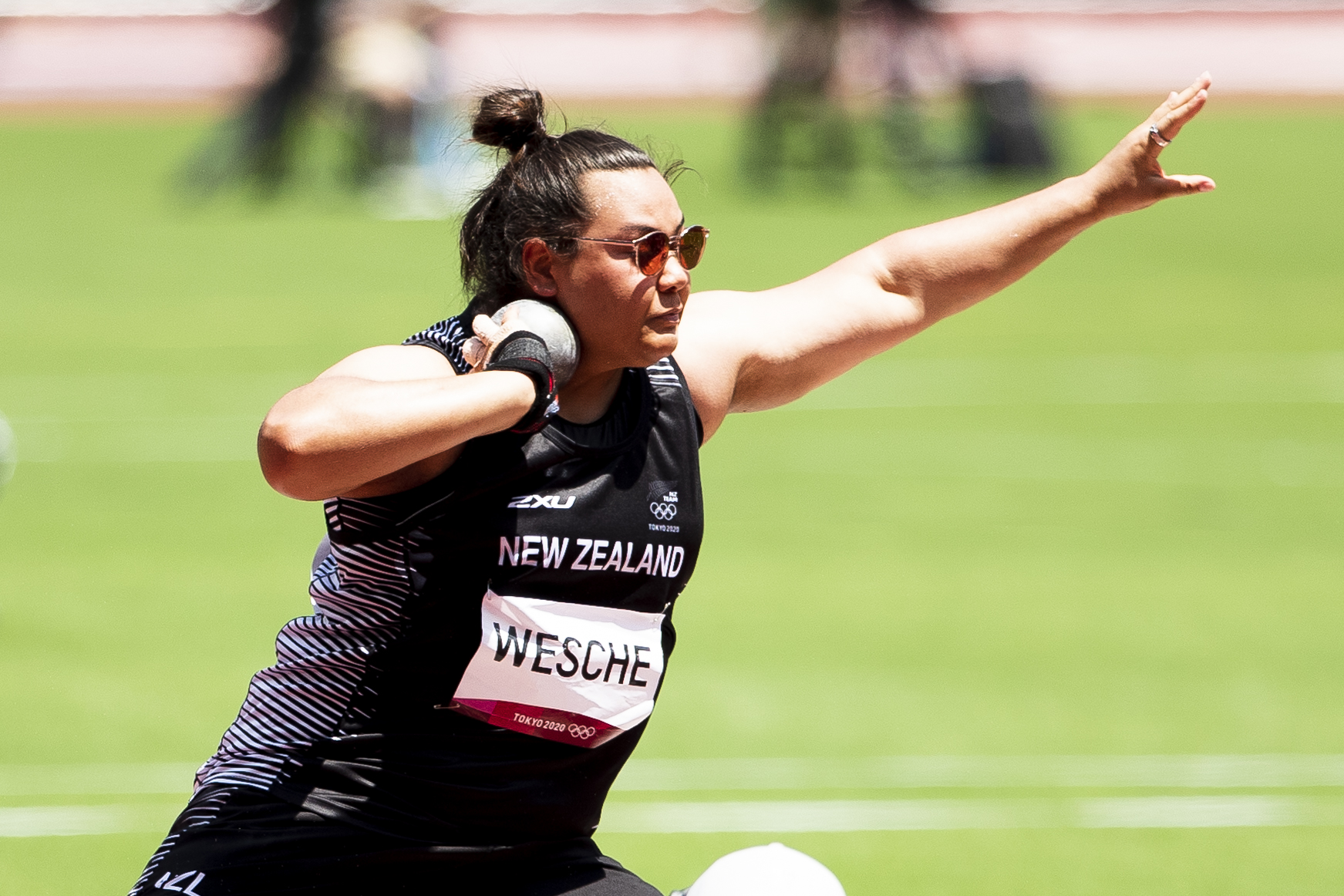 One of New Zealand’s big athletics success stories at Tokyo 2020 was the breakthrough performance of Maddi Wesche. Steve Landells caught up with the emerging shot put star to talk everything from her post-event celebratory ice cream to those trademark sunglasses.

Fail to prepare, prepare to fail is a well-worn phrase but it perhaps perfectly sums up the philosophy of Maddi Wesche.

Such is the Olympic sixth-place finisher’s commitment to preparing – Maddi took to the infield for her Olympic shot put final everything from an umbrella, two hats, two bags of ice, six bottles of slushies, electrolytes and cooling towels.

“I guess I’m an over planner,” admits Maddi. “I’ve always got lists and spreadsheets made of things that I need. I plan for every scenario. I guess I didn’t need most of the gear (I took with me to the final) and there are some things I could have done without.”

While it is impossible to specifically pinpoint that any of the equipment she took into the infield contributed to her 18.98m personal best in the final, what is he true is that her diligent, organised approach had unquestionably aided the 22-year-old’s development into a world-class shot putter.

Maddi first announced herself on the global stage when winning the world U20 title in 2018. The following year she hurled a PB of 18.32m at the Sir Graeme Douglas International before finishing sixth at the World University Games and finishing 25th overall at the World Championships in Doha.

She enjoyed a solid 2020 domestic season before the global pandemic struck, triggering the postponement of the Tokyo Olympics.

Yet while many struggled to adjust to the new set of circumstances, for Maddi lockdown provided few training obstacles.

Fortunate that her grandparents – who live close by in West Auckland – had a gym she could access and living just 200m from Glen Eden Athletics Club, her training was barely compromised.

“Following the postponement of the Games, I just went with the flow,” she adds. “It gave me another year to get better technically and get a little bit stronger. I know the world was in a terrible situation, and it sounds real bad but the extra year put me in a better situation.”

Coached by Mike Schofield – who principally looks after Maddi’s strength and conditioning – and Walter Gill, who focuses more on the technical side, the combination of different coaches’ voices works.

“We gel together well and where we think something will work, it will be said to the group and we’ll decide to either add it or not,” adds Maddi, who combines her time training between AUT Millennium and Takapuna Harriers on the North Shore.

A couple of hand niggles restricted her from producing her best during the domestic campaign – although she still grabbed silver behind Dame Valerie Adams at the Jennian Homes New Zealand Track & Field Championships.

However, competing twice during June in Gold Coast she gave a hint of what she was capable of by claiming back-to-back PB’s of 18.40m and 18.47m.

“It gave me huge confidence going into Tokyo,” she says. “I was so happy to travel, get out of New Zealand – I think it was crucial. If I hadn’t done those comps and got those PB’s it would have been a struggle to get into the top 32 (note, Maddi needed to be ranked in the top 32 in the world by the end of June to confirm her place on the team for Tokyo).”

So given her performances in Gold Coast, did that alter her expectations for Tokyo?

“I really had no expectations,” she said. “It was the first pandemic Games or competition for me on this scale. I hadn’t done a competition for about six weeks and I was just really excited to throw.”

Sharing an apartment in the Olympic Village with Julia Ratcliffe, Hamish Kerr and Dame Valerie Adams, she sensibly – given the Covid risks – opted to keep a low profile in countdown to the competition.

She instead focused on putting the finishing touches to her preparation with coach Mike Schofield, checked in with her three sisters and family back home and carried out some work on her psychology degree at Massey University.

The approach worked. During qualification she produced the longest throw of her career to that point – an 18.65m throw to advance to the final in 11th.

“I was really hyped up and nervous,” she admits. “It was my first competition in seven or eight weeks since Australia – and I had a reputation to uphold with two PB’s in two weekends (on the Gold Coast). I was ultimately excited. I love throwing and to set a PB on the biggest stage was a dream come true.

“I did surprise myself a little (with the 18.65m effort). It was an average throw technique wise, so I didn’t think it would be a huge distance.”

For the final she went through her usual processes. She planned diligently. She chatted to her coach and listened to her eclectic mix of rock, house, dance and R&B songs at the warm-up track pre-competition.

Relaxed, happy and confident after a handy 18.42m in round two, in the following round she fired the metal ball out to a sensational new personal best of 18.98m – which ensured three further throws and a top eight finish.

Maddi produced three further 18m+ throws for the remainder of the competition but could not improve on her monster 18.98m throw. Nonetheless, she claimed a magnificent sixth – just three places behind New Zealand sporting icon Dame Valerie Adams – who snared bronze and a historic fourth successive Olympic shot medal.

“It is still crazy to think about,” explains Maddi. “Mike (Schofield) and I achieved everything we set out to do. It was cool everything came to fruition and still a little weird to know that it has happened.”

Currently in MIQ in Christchurch with the rest of the New Zealand Olympic Team, a full celebration of what she has achieved will have to wait until she returns to her family in Green Bay, West Auckland.

But Maddi, who is teetotal, admits she has at least partially celebrated her success with her traditionally post-event ice cream.

“I called in at the food hall and had a French vanilla ice cream with Mike,” she adds. “It is what I always do after a good competition.”

While calling Dame Valerie’s achievement’s “inspirational”, Maddi acknowledges that she represents the future of the event in New Zealand.

Next year she is looking at the World Indoor Championships in Belgrade, Serbia as a potential option followed by the World Championships in Eugene and Commonwealth Games in Birmingham. She would also like to try her hand on the Diamond League circuit.

Yet that is for another day – which leaves one remaining question; can she explain more about her stylish competition sunglasses which have now become her trademark?

“I’ve had so many comments about the glasses, even before the Olympics and ‘would they fall off?’ Thankfully, they never do and I wear them for a comfort thing because at one point the sun was blaring in my eyes. There are a pair of Prada glasses, I got them for my 18th birthday and are now an essential part of any throwing competition.”