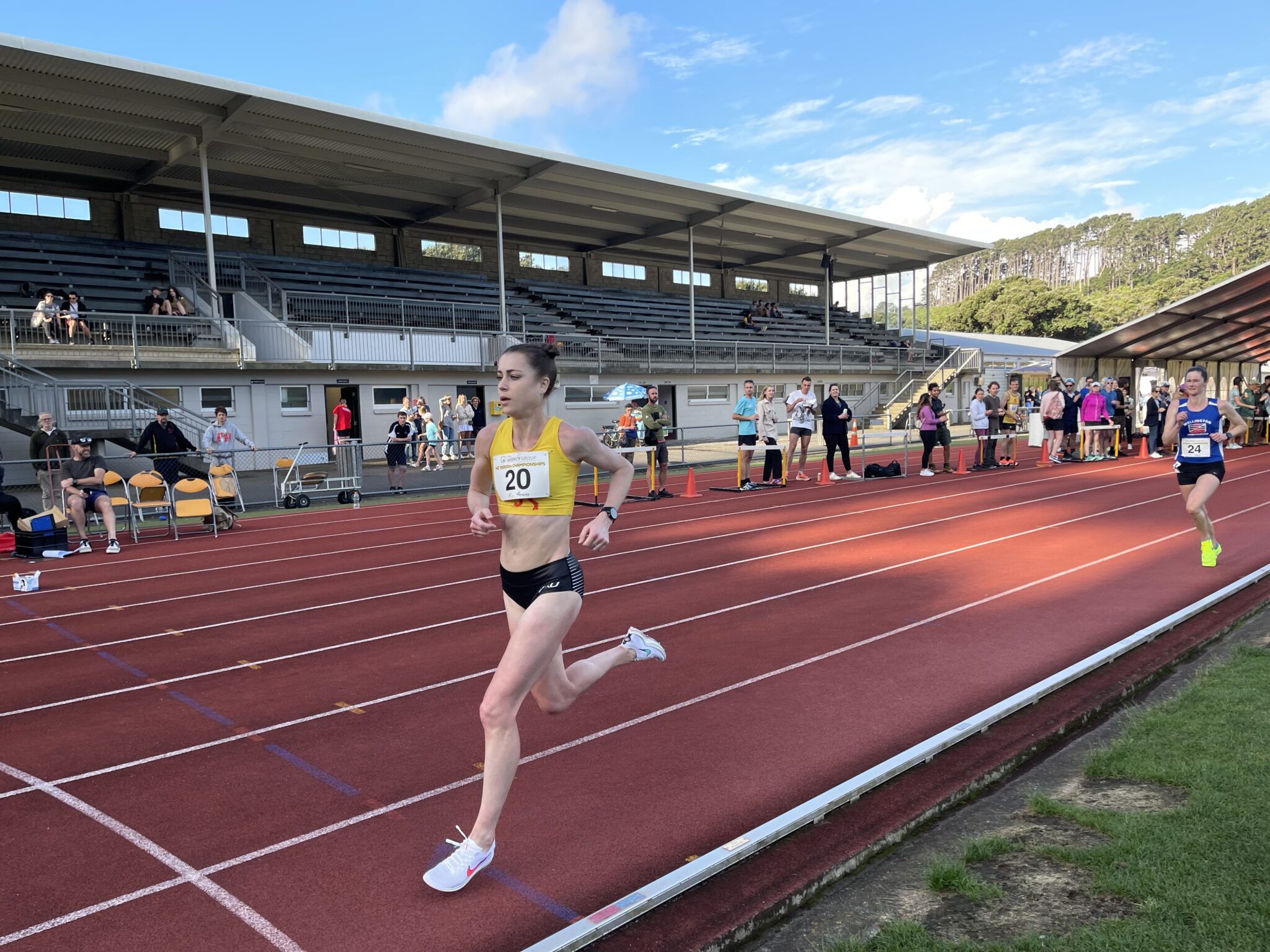 The championships, run as part of the popular annual Agency Group 10,000m Festival, boasted the additional innovation of athletes running each lap through a 21m long marquee set up down the home straight with spectators in close proximity and the athletes duly responded by producing a flurry of PB performances.

A high-class women’s race, served up a compelling battle as Miller added to her national 10km, half marathon and marathon titles to strike gold in 34:25.26 – under the performance standard time of 34:30. Sarah Drought (Wellington Harriers), who secured the performance standard two weeks earlier at the Timaru Ten, executed another fine race to take silver in 34:36.41 with Olivia Witney (North Harbour Bays) on her 10,000m track debut nabbing bronze in 35:00.41.

There was no change to the top four with Nagel tracked closely by Witney, Miller and Drought as the halfway checkpoint was hit in a rapid 17:08 – well under the performance standard time for the 2023 World Cross Country Championships to be held in Bathurst, Australia next February.

After Nagel pulled aside around 7.5km following a herculean effort at the front, it was Miller, the Wellington Scottish athlete, who attacked at the front. While Witney could not respond, Drought, a mother-of-two, rose to the challenge and for the next couple of laps doggedly trailed the leader by a mere 5m.

However, Miller, a runner of immense class who boasts a 10,000m PB of 33.23.89 and earlier this year ran a half marathon PB of 1:12:41, slowly cranked up the pressure over the final three laps to finally break the resistance of the stubborn Drought.

Finishing magnificently, Miller who hails from Southland but who now lives in the capital where she works as a junior policy officer in strategic planning at the NZ Ministry of Foreign Affairs and Trade, stopped the clock under the target World Cross Performance standard to wash away the frustration of a disappointing 10,000m run at AUT Millennium just three weeks earlier, where she ran almost a minute slower than her time today.

Drought ran splendidly to match the silver medal she won at the 10km road championships just two months earlier. Witney, the 2018 national 3000m and 5000m champion, who is targeting an overseas marathon in April, clinched another national podium.

Miller said: “This one (national title) probably means the most. I’ve really struggled in training over the past couple of months and I haven’t been able to pull workouts together.

“I was starting to get quite despondent and wondering if my time in the sport was coming to an end.

“This is still a good minute off my PB, and short of what I would like to be running, but this week was just about trying to knock off that time for world cross and to have just clinched it is amazing.

“I couldn’t have done it without that tent full of supporters, really good conditions and Laura’s support. I am super thankful for that. I’m both elated and relieved.”

In the senior men’s race, the versatile Julian Oakley produced an imperious display to add the national 10,000m title to the mile and 3000m crowns he snared earlier this summer to take 20 seconds off his best time for the 25-lap distance, recorded at the same meeting 12 months ago.

Eric Speakman (Napier) claimed a remarkable sixth successive national silver medal with a PB of 30:07.66 while home athlete Nathan Tse (Wellington Harriers) unleashed a massive breakthrough performance to obliterate his previous best by one minute and 21 seconds to record 30:17.14 for bronze.

Tasked with the role of pacemaker, sub-28-minute 10,000m performer Oli Chignell set about the task with gusto and went through 3km in 8:52 tracked by Oakley, Ronan Lee, Speakman, Tse and Christopher Dryden.

Maintaining a metronomic rhythm, Chignell passed the 5km checkpoint in 14:47 with only Oakley and Lee for company and Speakman a further four seconds adrift.

As Lee dropped off the pace, Chignell stepped aside with seven laps remaining to leave Oakley clear in front with the main goal to secure the senior men’s World Cross Country performance standard of 29:45. Running freely and with confidence, the Athletics Tauranga athlete injected more pace into proceedings upping the average time from 71 to 69-second laps.

Crossing the line more than 25 seconds under the target time it was another supreme performance by the 29-year-old athlete, who is excelling over a range of distance from the 1500m to the half marathon.

Speakman plugged on gamely in the latter stages to take yet another national silver to sit alongside his national 1500m, mile, 3000m and 5000m of the same colour in 2021 and his New Zealand 3000m silver medal from earlier this year.

Tse finished strongly over the final mile to earn his spot on the podium, although Lee (Pakuranga AC) in fourth was rewarded for his aggressive first 5km to claim fourth in a massive new PB of 30:26.36. Christopher Dryden (University of Canterbury AC) placed fifth in 30:30.98.

A delighted Oakley said: “It is always special to win a national title, I don’t take it for granted and it is nice to add the 10,000m to the other (national) titles I’ve won.

“Oli ran a great 10km himself (earlier this year) and although it was light work for him to 71 second laps, I really appreciate his efforts. I felt good through 5km and when he left the track, I knew it would become a lot harder running on my own. I managed to pick up the pace a little and I ran a solid last kilometre.

“I knew I had a good 10km time in me, but the number one goal was to get the standard. I didn’t run my best race in Taupo at national cross coming off an illness, so to come back here and run a good time, I’m really happy.”