To conclude our week of content across National Volunteer Week we focus on the tireless work of Matthew Strange who as club chair successfully helped revive Papamoa AC last summer.

When Matthew Strange saw how devastated his eldest daughter, Caitlyn, was when Papamoa AC folded during the summer of 2020-21 due to a lack of volunteers he was determined to do something about it.

Caitlyn, aged eight at the time, has been a member of the club since the age of three and enjoyed not only the competitive element at Bay of Plenty-based club but also embraced the camaraderie and friendships formed. 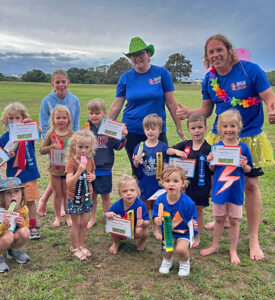 So last August, Matthew, picked up the phone to the club secretary Carla Robertson and set the ball in motion for helping revive the club – which back in 2019-20 boasted 200 members.

“I was really gutted that I couldn’t have helped the year prior to keep the club going,” explains Matthew, who works as manager of the Mount Hot Pools in Mt Maunganui. “I was also on the Papamoa Surf Lifesaving committee at that time, and I thought to also be involved at Papamoa Athletics Club was too much. But I thought about it over that summer and into winter and all I needed to make was that one phone call (to Carla). Once I had that commitment, there was no going back. I needed to get the club going not only for my daughter but for the kids the in the community.”

For his five years involved at the club as a parent helper between 2015-2020, Matthew has gradually seen a drop off in volunteers to the point husband and wife team Carla and Anthony Robertson were shouldering the entire burden. The club’s demise in 2020-21 was not a total surprise but a huge disappointment.

So after some months of contemplation in August last year he reached out to Carla by phone to state his desire to re-start the club. He posted his plans on Facebook and within a month he called a meeting of around eight people. Matthew became chair and formed a committee with the intention of reviving Papamoa AC for the 2021-22 summer campaign.

He faced many challenges. Reforming the club in the middle of Covid lockdown was not straight-forward as he forced to spend countless sessions on Zoom with his committee. He noted an initial hesitancy from people to commit to volunteering at the club, so from the outset he made it clear the workload would be shared. ‘It feels at times that five per cent of the community do 90 per cent of the work when it comes to volunteering.  Our passionate committee are involved in multiple voluntary club positions around the city.”

Other operational changes were also implemented – not least a change from the historical approach of weekly points nights at the club.

“We had points nights every week but with no real emphasis on skills or development,” explains Matthew. “So, a big goal has been to develop the skill base of the kids. Now instead of having a points night every week, we have members (aged three to 12) develop their skills over three weeks for the particular events in which they will compete in on the fourth weeks points night. We will then switch events for the following four weeks.” 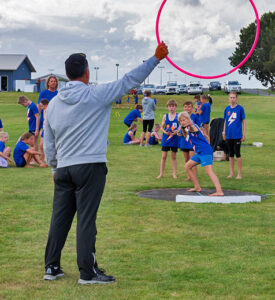 The club has also been fortunate to have the likes of Athletics NZ Coaching Co-ordinator Mariah Ririnui, Athletics NZ High Performance Coaching Manager Kirsten Hellier with husband Pat and leading sprints coach Kerry Hill come down to help out with coaching sessions, which has unquestionably led to an upskilling of club members.

Another big motivation for Matthew and his team of volunteers at Papamoa AC has been for the kids to be ‘more active, more of the time’ during club nights and for more coaches to volunteer with less hesitancy. To encourage the latter a designated club night co-ordinator Elle Reid was put in place, tasked with easing the burden on volunteer coaches.

Today the club boasts around 16 volunteers and despite membership restricted to 150 last year because of Covid (the kids were in three bubbles of 50), Matthew was delighted at the success enjoyed by the revived club last summer.

“When people see that Papamoa is an organised club and with the likes of Mariah, Kirsten, Pat and Kerry interested in helping out, people naturally gravitated towards the club. We built some great momentum in our first year back and we’ve had interest from people who went to other clubs after Papamoa was out of action for a year to come back once again.”

Matthew whose ten-year-old daughter, Caitlyn, once more competes at the club as well as his younger daughter, Elle, six, said: “I’m very proud at the progress we’ve made. What we envisaged as a committee was the kids to be more active on training nights has definitely come to fruition. We’ve got a few tweaks to make in the future, and we’d like to offer more support to our older kids to keep them more engaged but we are heading in the right direction.

“I was really proud at our end-of-season prizegiving,” he adds. “We had 120 kids there and to see them all in their club uniforms with their medals and big smiles on their faces is what we hoped for when we re-started the club.”