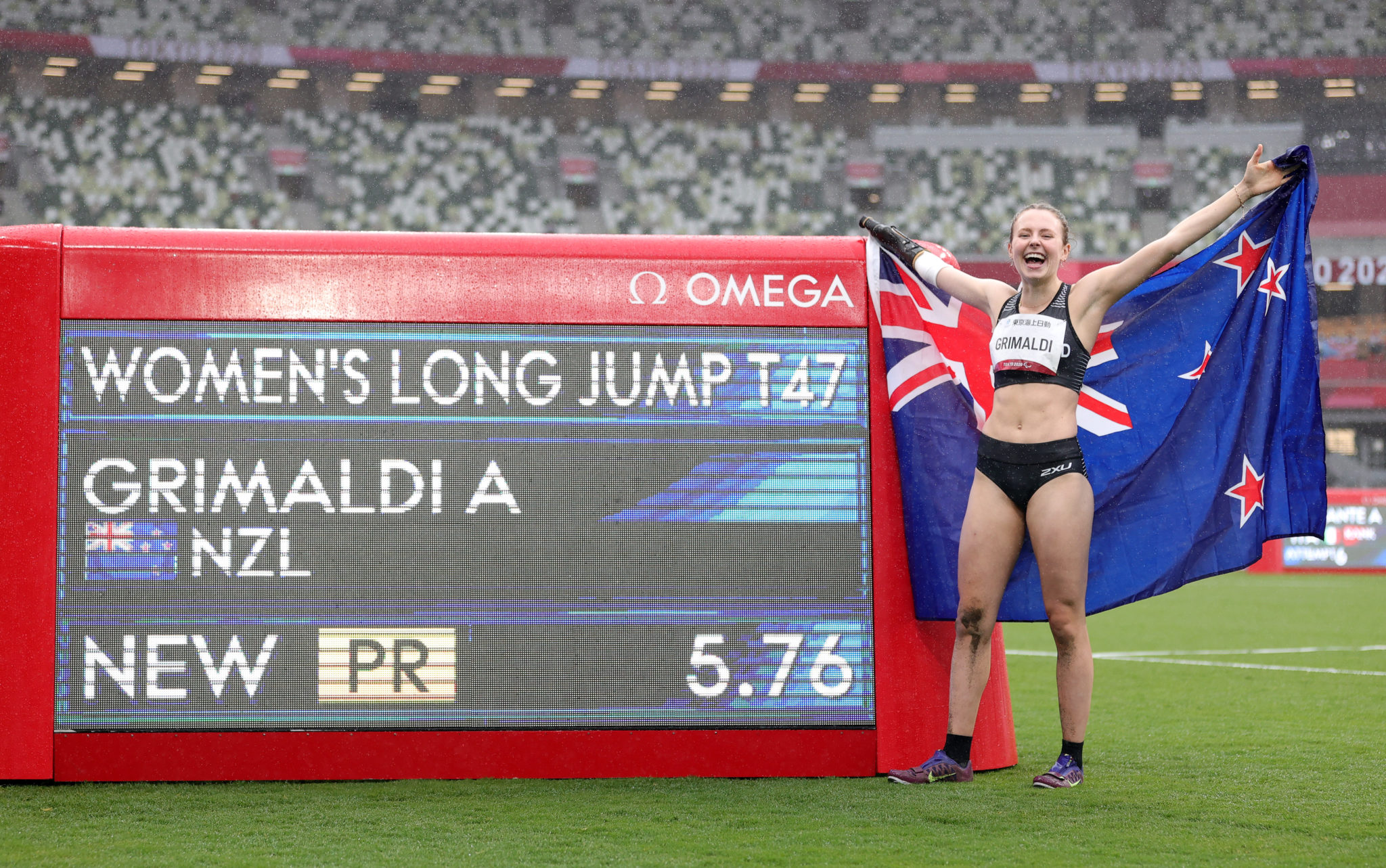 TOKYO, JAPAN - SEPTEMBER 03: Anna Grimaldi of Team New Zealand celebrates next to the display after winning the gold medal with new World Record in the Women's Long Jump - T47 on day 10 of the Tokyo 2020 Paralympic Games at Olympic Stadium on September 03, 2021 in Tokyo, Japan. (Photo by Carmen Mandato/Getty Images)

Despite the dire conditions inside the Tokyo Stadium, the 24-year-old produced a masterful display of long jumping excellence – twice surpassing the Paralympic record to secure gold with a best of 5.76m in round four.

Russian Aleksandra Mogochaia was the best of the rest to take silver with 5.67m, but the New Zealander would not be denied and five years on from her breakthrough international success at the Rio 2016 Paralympic Games, Anna once again reigned supreme.

From the moment the stadium announcer introduced the South Island long jump ace she looked a picture of confidence – enthusiastically waving to the TV cameras complete with beaming smile.
The confidence was not misplaced and from the opening jump of the competition she stamped her mark on the rest of the field, adding 3cm to the Paralympic record with a stunning leap of 5.74m to take a first round lead with Ecuador’s Kiara Rodriguez 11cm in arrears.

In round two, the Hill City University Athletics Club jumper earned a red flag with Mogochaia emerging as the Kiwi’s main threat with a 5.67m effort elevating the Russian to second.

Following a further foul in round three, Anna, who looked fast and fluent on the runway throughout the competition, extended her advantage with her fourth attempt – leaping out to 5.76m to better her Paralympic record mark.

The Brent Ward-coached athlete followed this up with a 5.64m effort round five but after Mogochaia could only match her previous best of 5.67m with her final attempt, Anna could then celebrate a second successive Paralympic gold medal.

An elated Anna said: “I’m in a whirlwind. There has been so much that has gone into this for the past five years and I owe a lot to a lot of people. I hope I did them proud out there.

“The weather wasn’t ideal, but I got stuck in. It has been a huge five years and I just feel the weight of the world has lifted off my shoulders.”

Despite her outwardly confidence demeanour Anna admitted: “This was the most nervous I’ve been for a competition, so to finish today with my name on top was pretty surreal.

“The plan was to go in with a safe jump and not foul my first jump, so I’m stoked that I didn’t (and set a Paralympic record) and that helped me relax. But in saying that I was not that calm. The last couple of weeks have been pretty tough, I’ve been pretty nervous and the doubts and the stress had crept in. The confidence had dwindled but I was super lucky to have people around me to support that; my partner, my family and friends, HP support staff my mental skills trainer, the team psychologist. It has been not only a rollercoaster last five years but also a rollercoaster last four weeks.

“In Rio I won by accident but here I did it (won) on purpose. I’ve changed as a person, and I hoped it is obvious to people watching how different I am. I’m really proud.”

Later tonight New Zealand will be hunting more precious metal when Holly Robinson takes to the runway in the final of the women’s javelin F46. The experienced three-time Paralympian from Hokitika on the West Coast snared a silver medal at the Rio 2016 Paralympic Games and will be hoping to go one better tonight. The action gets underway at 10.28pm.