Melissa Moon: I competed at the North Island Cross Country Championships, which were hosted at Spa Thermal Park, for ten years in a row but my abiding memory was that it was a terrific club trip with Wellington Scottish. I loved the course and the organisers of the race – Taupo Harriers – did a fabulous job as host. The atmosphere and the prizegiving was always great and we received some fantastic medals too.

Jonathan Wyatt: The first races I ever did were as an eight and nine-year-old running cross country races in Wellington – so cross country was my heritage as a runner. I never ran nationals at Spa Thermal Park (Jono was aged 15 the last time Spa Thermal Park held the New Zealand Cross Country Championships in 1987) but I always really looked forward to the North Island Cross Country Champs because it had most of the elements I looked forward to as a cross country runner.

What was special/unique about the course? 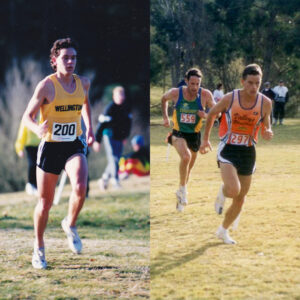 MM: I just loved the course because it threw everything at you! It was a firm, so you needed good speed, but it also posed some really steep hills of differing lengths and gradients which tested your strength. Throw in lots of twists and turns, which tested the agility, with some jumps to navigate, made it such an interesting course. Spa Thermal Park summed up cross country running. To me, cross country was about having to think thorough a course, it should not just be about running on a flat, grass track. At Spa Thermal Park you have to continually think about the course; do I need to shorten my stride for the next uphill section? During the long flowing descent, I need to try and relax my body and let my legs carry me downhill.

The more you run the course the more you understand it. I set my course record in either my last or second last year running Spa Park (it was in 2002) and that was probably because by then I had mastered the many elements of the course.

JW: It was the perfect blend of a cross country course that was both hilly but fast as well. The pumice base always made the ground firm, so I never experienced a wet or muddy course. That consistency underfoot also meant you could compare times from one year to the next.

What were your highlight running at Spa Thermal Park?

MM: I really enjoyed my first win there. I was new to running, I’d only been training a year and I went to the 1994 North Island Cross Country Championships taking on some of the big guns at that time; Helen Moras and Sharon Clode. I will never forget winning that race. It gave me confidence, made me believe in myself and spurred me on to train harder in the future. The second highlight was setting the course record. For years I had run a time between 17:10 and 17:35, so for everything to come together and run 16:55 was a real highlight.

JW: The race that stands out and what pleases me the most was setting the course record and running under 27 minutes for 9km – a sub-three minute per kilometre pace. Alan Bunce, who was a terrific 1500m runner, was second and I just had one of those days where everything fell into place. I managed to run away on the second lap and broke away from Alan on the flat. I think this surprised him, given he had so much ability over 1500m.

Do you have any tips for running the course? 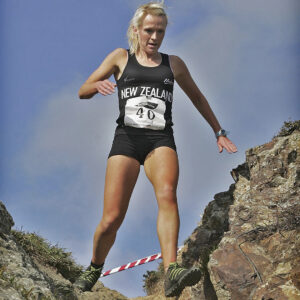 MM: Everyone runs the course to their own strengths, but I would say don’t go too hard too early. It is a course which requires pace judgement. It is easy to get carried away on the downhills and motor down at speed, but if you do you will pay the price later in the race. Towards the finish there is a one short, sharp hill before the long, flat finish to the end. It is important to dig in at the final hill before opening your stride on the flat over the final 500m. It requires a strong mental effort to get up and over that final hill, but it can give push hard over the hill it can give an athlete vital momentum leading into the finish.

JW: It is a course that requires patience, particularly on the first lap. It is a testing course, but it is important to run to your strengths. If you are strong uphill runner it pays to wait to put in an effort on the longer climbs. On the downhill sections athletes need to relax as much as possible while still maintaining good speed.  With any athlete I coach I get them to think about the course and then simulate and practise those aspects in training.

For any athletes wavering about entering the 2022 New Zealand Cross Country Championships, what would you say to them?

MM: The city of Taupo is such a cool city, and the venue is terrific. It is spectator friendly and the course offers something for everyone. Some downhills, long uphills, short, sharp uphills long descents and then a flat 500m section. It is such an enjoyable course to run, so I would encourage anyone to give it a go.

JW: There is such a strong endurance and trail running scene now in New Zealand alongside the traditional club system. But I would always say to any endurance runner to try the national cross because it offers a fantastic speed work opportunity. Spa Thermal Park is one of the best cross country courses in the world. I’ve run on plenty of cross country courses around the world in Europe, Japan and the US and Spa is the one that stands out for me as one of the best. To have the national champs there doesn’t come around every year, so take the opportunity.