Records fall at Jumps to Music 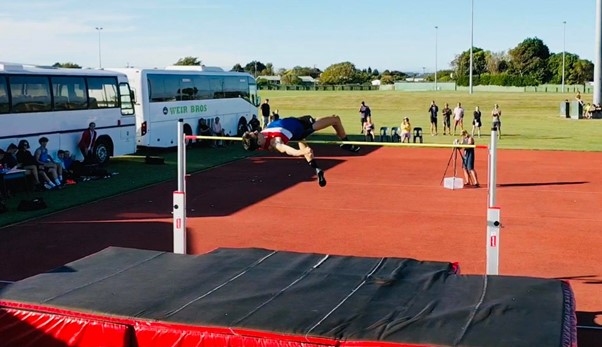 Hamish Kerr clears 2.24m to win the men’s high jump at Jumps to Music 8 in Hawera.

The Jumps to Music festival was finally graced with some agreeable weather on its eighth edition and the athletes responded by putting in a series of impressive performances at Hicks Park in Hawera, Taranaki.

A consistent westerly meant the buses which have now become part of the event were again needed to provide a wind break but this year they also helped to provided some additional shade for the athletes and spectators.

A good crowd of about 200 came along to watch some of New Zealand’s best high and long jumpers perform to songs they chose according to the meeting theme of Movie Madness.

In addition to the competition awards, there was also a gift certificate awarded to Angus Lyver for his song choices of All Star from Shrek and Circle of Life from The Lion King. Meeting host Ashleigh Bennett also walked away with a gift certificate for best outfit for her Wonder Woman ensemble.

In the high jump, spectators were treated to a massive 2.24m clearance by national record co-holder Hamish Kerr.

Kerr, rounding into mid-season form, used only a five-stride approach to master the height which is now a meeting record, as well as a Hicks Park record. Josh Inger also had a good evening, popping over at 1.98m, a ten-centimetre improvement on his previous Jumps to Music best.

In the women’s high jump, Josie Taylor achieved a new personal best of 1.85m to take out the competition, drawing level with the meeting record in the process. Keely O’Hagan was not far behind, clearing 1.79m, followed by Imogen Skelton at 1.75m.

The men’s long jump was highlighted by Argentinian Nicolas Moratella’s leap of 6.72m. Angus Lyver was close behind Moratella at 6.57m while Abhi Parmar was third with 6.50m.

In the women’s long jump, Hungarian Lili Szabo leaped out to 5.72m to claim the win. Hawera’s national secondary schools champion Lara Hockly was out to 5.50m for second while Charlotte Drabble took out third with 5.28m.

Meeting organiser and defending champion Ashleigh Bennett was unfortunately forced to withdraw from the competition due to a minor injury that she did not want to aggravate.

This year’s innovations included video evidence of long jump take-offs and athletes being provided with metres-per-second speed for the last ten metres of their long jump approaches. There was also professional filming of the event, including drone footage which will be edited and presented in the next few weeks.

The Athletics Hawera committee stepped up once again with a fabulous buffet for the officials, athletes, coaches and athletes’ families. Each athlete, official and coach also received a gift bag for attending the event.