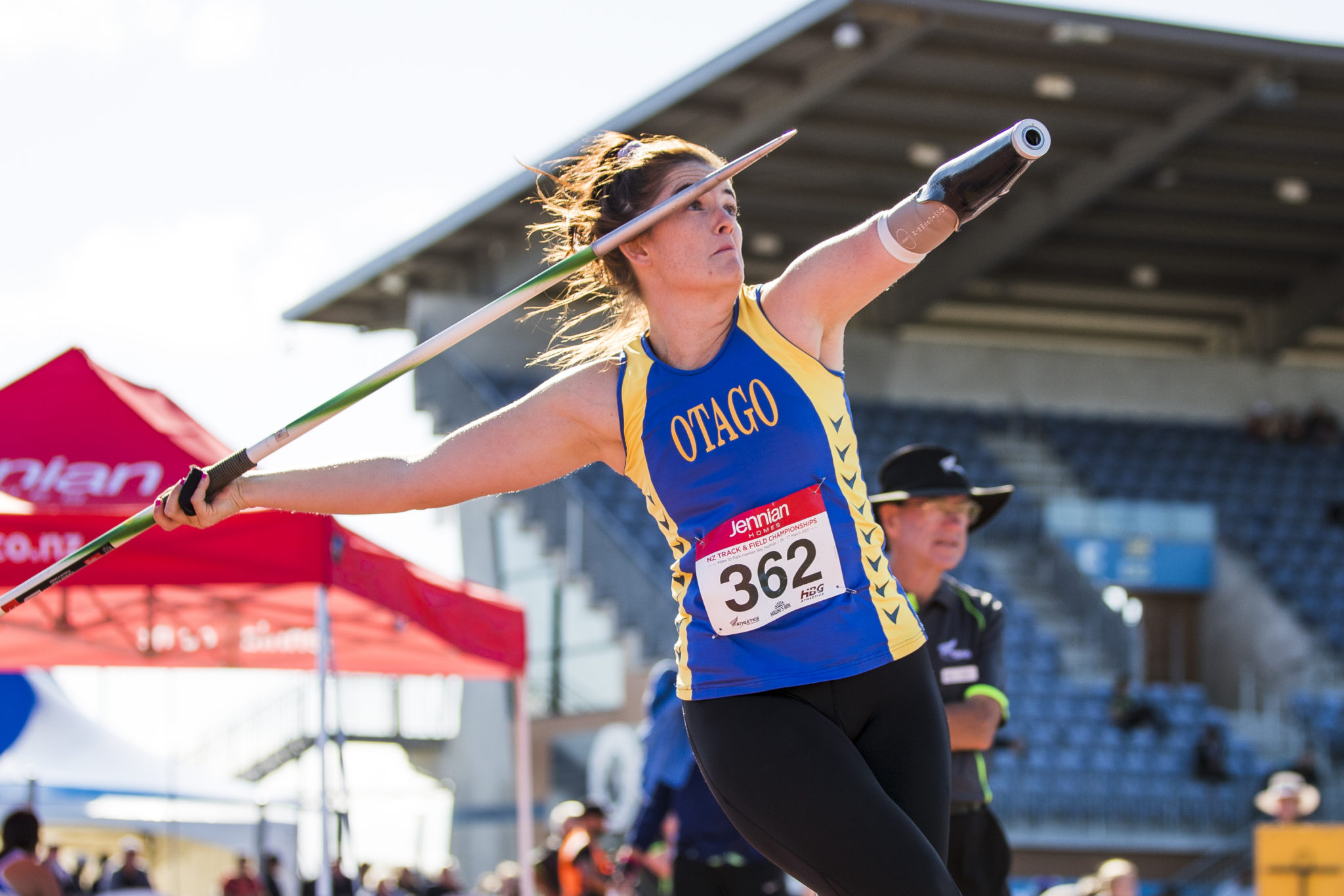 Paralympic, Commonwealth and World silver medallist Holly Robinson has written herself into the record books by becoming the first Para athlete to win a medal in an open event in the history of the Jennian Homes New Zealand Track and Field Championships.

The 26-year-old javelinist took out silver on the first part of day two in Hastings with a best of 44.26m in round six – her longest throw since breaking the world F46 record of 45.73m at the 2019 Australian Championships.

It was a performance which represented a welcome return to form after a frustrating period for the Otago-based athlete – which included sustaining a broken ring finger following an accident while box jumping last month.

“I’m pretty stoked, although I’m probably stoked by the fact that things are finally coming together for me,” she says. “I haven’t had too many great throws over the last year and a half, so to finally do that despite not having an amazing build-up because of being injured means I’m super stoked to be standing on that senior women’s podium.

“It’s been a long slog since, so it is a good feeling to know before the Paralympics I am back to good form.”

Jessica Senior (Southland) upgraded on the bronze she won at 2020 nationals to capture gold in the open women’s competition with a best of 45.40m. Bronze was snagged by Brianna Tirado (Auckland) with 43.57m.

Another Para athlete to impress was world and Paralympic 400m bronze medallist William Stedman, who clipped 0.15 from his national T36 record with a time of 53.96.

The performance was a big boost for the 21-year-old Cantabrian in the countdown to the rescheduled Tokyo Paralympics later this year.

“I’m so stoked, it has been almost two-and-a half years since I last set a PB, so to finally go under 54 is pretty amazing,” he said. “I knew I had it in me, I’ve been there or thereabouts and I really wanted to do it because I knew it was my last chance of the season. It was so good to be able to chase Mitch (Joynt, the T64 athlete who ran a time of 55.00) for the first 300, it really helped.

“Today helps confirm to me that the work that we have been doing actually works.”

Further evidence of the strength in depth of the New Zealand Para programme was offered by World F37 shot put champion Lisa Adams, who hurled the 3kg shot out to 15.13m – within 37cm of her world record set here at Mitre 10 Park last September.

The gifted 19-year-old, who set his national resident record of 64.29m at this venue two months ago, was delighted to strike gold after having a troubled build-up to the competition.

“I’m really chuffed with how it went because it been a difficult last week with a bit of a back irritation,” said Bell, who added that the right head crosswind today represented ideal conditions.

“Up until Thursday, I had done nothing for a week in training, so I’m really happy to come away with 61.85m. In a perfect world it is not quite what I would have wanted but, given the circumstances, I’m pleased with that.”

Camryn Smart meanwhile emulated the feats of her well-known mother, Toni Hodgkinson, some 26 years on to be crowned senior national 400m champion.

The talented 19-year-old has made a huge improvement during the 2021 summer campaign and chose the perfect moment to slice 0.15 from her PB to strike gold from flat-mate and fellow former Motueka High School student Isabel Neal, who took silver in 54.74. Canterbury’s Jordyn Blake took bronze in 55.09.

“I’m so chuffed, it has been such a long season and to finally finish it off with such a good performance is a good reward. To win this title that my mum won is exciting, an honour.

“I wasn’t sure if I’d gone hard enough at the start but I told myself not to panic and work around the final bend so when we hit the home straight I’d at least be equal. It was then a case of giving whatever was left really.”

In only his fourth ever 400m competition, Hamish Gill reaffirmed what he has consistently displayed this season to secure the men’s national senior title with a stylish win.

Gill, who last year won 100m and 200m national bronze medals, only made his one-lap debut at the Porritt Classic last month but after winning that day in 47.72 he has proved a natural quarter-miler.

Unbeaten going into the race, he wisely ran conservatively into the wind for the first 200m before unleashing his well-honed speed to take 0.09 from his lifetime to record 47.59.

“I knew I was in a good spot but I also knew anything could happen on the day, so I was a little nervous,” Gill said. “The wind was a bit of a factor today but I’m glad to get around in a fast time. It is a sweet win and it shows the potential of the event for some sprinters to think about this event rather than just sticking to the 100m and 200m.”

After slipping in the blocks at the 2020 nationals and relinquishing his New Zealand title, Josh Hawkins returned to reclaim the men’s 110m hurdles with a typically dominant display.

The 27-year-old athlete crashed through the last couple of hurdles but could not be denied, stopping the clock in 14.16 (+2.5m/s) to capture his sixth national 110m hurdles crown. His fellow Aucklander Tom Moloney picked up silver in 15.27 – 0.04 ahead of the 2020 champion James Sandilands (Canterbury), who on this occasion earned bronze.

“After missing out on nationals last year, it was a motivating factor during the lockdowns,” Hawkins said. “Today the goal was to go for it from the start, I hit the ninth hurdle but I’m happy with how it went. It was nice to get my title back. I didn’t know how much it meant to me until after I lost it last year.”

Amy Robertson confirmed the domestic dominance she has shown all season to claim her maiden national senior title in the women’s 100m hurdles.

The 21-year-old is unbeaten in her speciality event and cruised to a comfortable win in 13.66 (+2.1ms/s), ahead of her training partner and seven-time former champion Fiona Morrison (14.20).

Robertson, who is coached by Fiona’s sister, Jill, and divides her time between Auckland, where she studies, and Christchurch, home of her coach, said: “I’m really proud, especially given the delay (postponement of the champs),” she said. “It took everything to keep going and re-peak. It was not the time I was looking for but I’m really happy to end the season on a national champs win.”

Thomson took a second-round lead with a season’s best of 14.65m (+2.0m/s), although Allan of Canterbury challenged strongly with a 14.58m effort in round three. Allan finished with a 14.55m leap but Thomson held firm to finally bank gold. Nicolas Moratella (WBoP) earned bronze with 13.27m.

Antonia Martin wiped almost two minutes from her PB to claim back-to-back women’s U20 10,000m race walk titles. The 17-year-old Aucklander recorded a time of 1:01:01.76 to clinch the double after success yesterday in the 3000m event.

Liam Ngchok-Wulf followed up his bronze medal and PB performance in the senior men’s shot put by striking gold in the men’s U20 shot with the lighter 6kg implement. The 17-year-old Aucklander tossed the metal ball out to 15.97m to claim victory by more than a metre.

Lara Hockly (Taranaki) completed the women’s U20 triple jump and long jump double – a leap of 5.34m good enough to take out the latter event.

The final session of the Jennian Homes New Zealand Track and Field Championships wraps up this evening to bring the curtain down on the domestic track and field season.