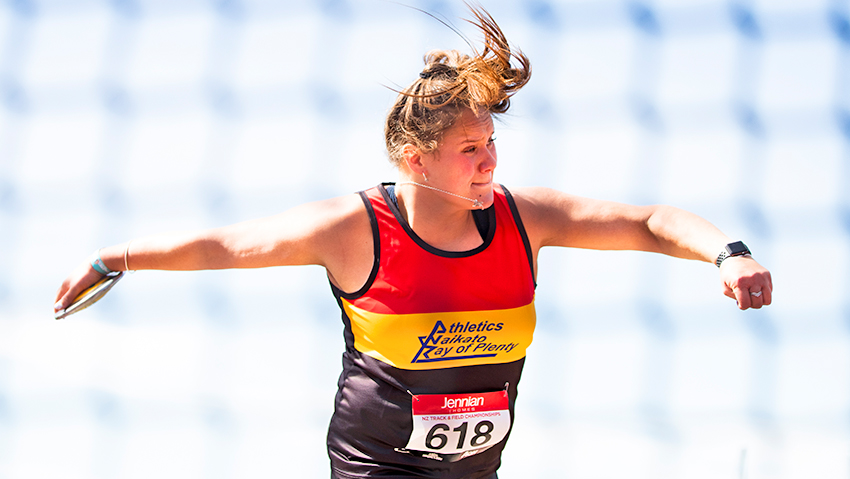 Tatiana Kaumoana elevated herself to number four on the all-time New Zealand lists after enjoying an outstanding 2022. Ahead of the Oceania Championships, Steve Landells spoke to the Christchurch-based thrower to find out how a radical approach to her weekly “training” programme has helped reap the rewards.

It is perhaps a little simplistic to say a return to life on the basketball court has helped revitalise the discus throwing of Tatiana Kaumoana, but a more balanced approach has certainly made a difference.

Of course, her physical gifts (she stands at 6ft tall), the coaching skills of Kim Mickle and her natural work ethic and determination have all played a part during a memorable 2022 campaign.

Yet since re-engaging with basketball and experiencing the joy of being in a team environment for the Lincoln University club team, should not be undersold as a factor.

At the end of a disappointing 2020-2021 domestic season, when the Christchurch-based thrower struggled with ongoing back issues and failed to meet her expectations, she gave herself a two-week ultimatum.

“I wasn’t enjoying it (throwing) and it came to the point where I had to weigh up my options and whether I wanted to do it,” explains Tatiana. “I gave myself a complete break from the discus circle and gym for two weeks in the off-season to see if I felt like going back or not.”

Tatiana discovered after just a week she desperately missed the buzz, thrill and challenge of discus throwing and was still enthused by the prospect of fulfilling her potential. However, the radiographer craved a more rounded approach, and this is why she opted to return to her childhood passion for basketball.

“In the off-season (of 2021), I re-started basketball to get my happiness back for athletics,” explains Tatiana. “I got my love back and what translated was the fact I love basketball but that I love throwing more.

“I had been getting into Crossfit but that was not very productive as a thrower. In basketball the jumping for rebounds is like plyometric work. Kim, my coach, is happy with that.”

There is little doubt the elixir is working, and Tatiana has just come off the best season of her career improving her PB by more than four metres during 2022 – capped by a 56.51m hurl in Christchurch to climb to number four on the all-time New Zealand lists.

Born and raised in the small township of Te Aroha, Tatiana was a sports-mad youngster. She competed in swimming, netball and basketball and discovered a gift for athletics, or more specifically throwing, at the age of nine at school sports day.

“I tried shot and discus and beat everybody,” she recalls. “I was encouraged to come along to the club nights (at Te Aroha Athletics Club) and I agreed to do so only if I didn’t have to run!”

Coached by her father for the first “two to three years” of her athletics career she quickly made an impact and at the 2011 North Island Colgate Games she secured the shot put and discus double.

However, later moving to a new coach, Kevin Bradley, she recalls a pivotal competition came at the 2014 New Zealand Secondary Schools Track & Field Championships in Whanganui when she finished a frustrating fourth in the junior girls shot, discus and hammer.

“It broke my heart,” she recalls. “I liked winning, but I maybe didn’t do the training back then I needed to, but I started to train properly after that competition.”

The move appeared to work as a more focused athlete consistently delivered, returning 12 months later to strike junior girls discus gold at the 2015 edition of the New Zealand Secondary Schools Championships in Timaru.

Now fully focused on discus after an elbow injured ruled out shot put, she continued to impress throughout her age group years and enjoyed a noteworthy year in 2017 landing New Zealand U18 and U20 discus titles, the New Zealand Secondary Schools title in Hastings with a new PB of 47.65m and most memorably a silver medal at the Commonwealth Youth Games in Bahamas.

“It was huge,” she says of climbing the medal podium in the Caribbean. “It is so such a rare thing for an athlete from a small place (Te Aroha) to come through (and perform well internationally). It was very special. I was so stoked to medal over there and the girl who beat me, Trinity Tutti from Canada has since become one of my close friends.”

It was all change for Tatiana in 2018 as she made move down to relocate to Christchurch to study while Amanda Murphy took over the coaching reins. Training in a high performance hub, which includes double Olympic bronze medallist Tom Walsh and in the countdown to the Tokyo Olympic Games shot put legend Dame Valerie Adams, has unquestionably been an inspirational experience and under Amanda’s guidance she underwent some big changes to her training structure.

“Before joining Amanda, I hadn’t really been to a gym and all my strength had just been natural,” explains Tatiana. “Amanda got me into a gym programme, I started to eat a little differently to help bulk up. We worked on lots of technical aspects to my throwing. I got used to being comfortable with being uncomfortable.”

Working hard on developing her “explosive power” Tatiana cracked the 50m barrier for the first time with a 50.64m hurl to finish second at the Australian U20 Championships in Sydney in April 2019, a performance which was to trigger a memorable performance at the Oceania Championships in Townsville a couple of months later.

In Northern Queensland, the Kiwi was inspired, launching the discus out to a PB of 52.91 to strike U20 discus gold before finishing fourth in the senior event with an outstanding series topped by a 52.68m throw.

“I’m not really one for showing my emotions externally, but I was definitely happy (in Townsville),” adds Tatiana. “It was super fun and a magical moment to stand on top of the podium. I still have goose bumps thinking about it today.”

Her year ended in disappointment as a bout of food poisoning hampered her attempts to deliver her best at the World University Games and the year ended with another coaching change as she came under the guidance of Kim Mickle, the 2014 Commonwealth Games javelin champion. As Kim is the partner of Amanda and had been a presence in the background for Tatiana, the move was not a radical change.

However, it has been a positive move for the shy Kiwi who is thriving under the guidance of the effervescent Aussie coach.

“She brings a great energy to the group,” explains Tatiana of Kim. “I’m a low-key kind of person but she has made training more fun and knowing she has that knowledge of being an Olympian is insane. I trust everything she says. My throws have continued to get better. I’m very grateful.”

However, it is not all been smooth sailing. As alluded to earlier issues with her back caused frustration in 2020 and 2021 as she finished fourth and third, respectively at the New Zealand Championships. This led to some serious soul-searching and with the full support of Kim she introduced basketball into her weekly schedule. Despite a jam-packed training programme of throwing four to five a week, four gym sessions and one plyometrics session the move has clearly worked wonders for the revitalised athlete.

However, other factors have been key, including making a big technical change and switching from being a block thrower into a reverse thrower. Despite suffering a stress fracture of the foot last spring, she emerged for her first competition of the year in Timaru in great shape, setting a PB of 53.12m to win the competition and backed it up two weeks later with another lifetime best of 53.75m at Potts Classic. In February she achieved a 54.48m toss in Christchurch before she hurled a breakthrough 56.51m effort at the ITM in her adopted home city.

“It wasn’t ideal conditions that day, but you can always find those pockets,” she explains. “I had to throw it low, as it was quite windy and a high throw would have been dumped back down. The key thing we went for that day was ‘grip and rip’ so quite different to normal. The exciting thing is, I know there is a lot more to come.”

Unbeaten for the season going into the Jennian Homes New Zealand Track & Field Championships, Tatiana in her words “bombed out” in Hastings winning bronze with a best of 53.22m. In a competition banked by the experienced Te Rina Keenan, the Waikato-raised thrower said: “I don’t really know what happened that day, I just psyched myself out, which I’ve never done before. I don’t normally get nervous for competitions, but I couldn’t get my head right.”

Since then, the radiographer, who works three to four days a week, has worked on techniques to aid her calmness and she had an ideal opportunity to banish the memory of 2022 nationals when lining up in the women’s discus at the Oceania Championships in Mackay next week.

“Training has gone well since nationals and the aim is to go over there, compete and win,” adds Tatiana, who owes a big thank you to her family and all her supporters in Te Aroha for her success. “A big PB would be great as well and we’ve been working towards that 60m mark. I’m excited to get out of the New Zealand cold and into some warm weather in Australia. I’m confident knowing I’ve performed well having had exposure to big events in the past.”