Sky the limit for record-breaking Bruce 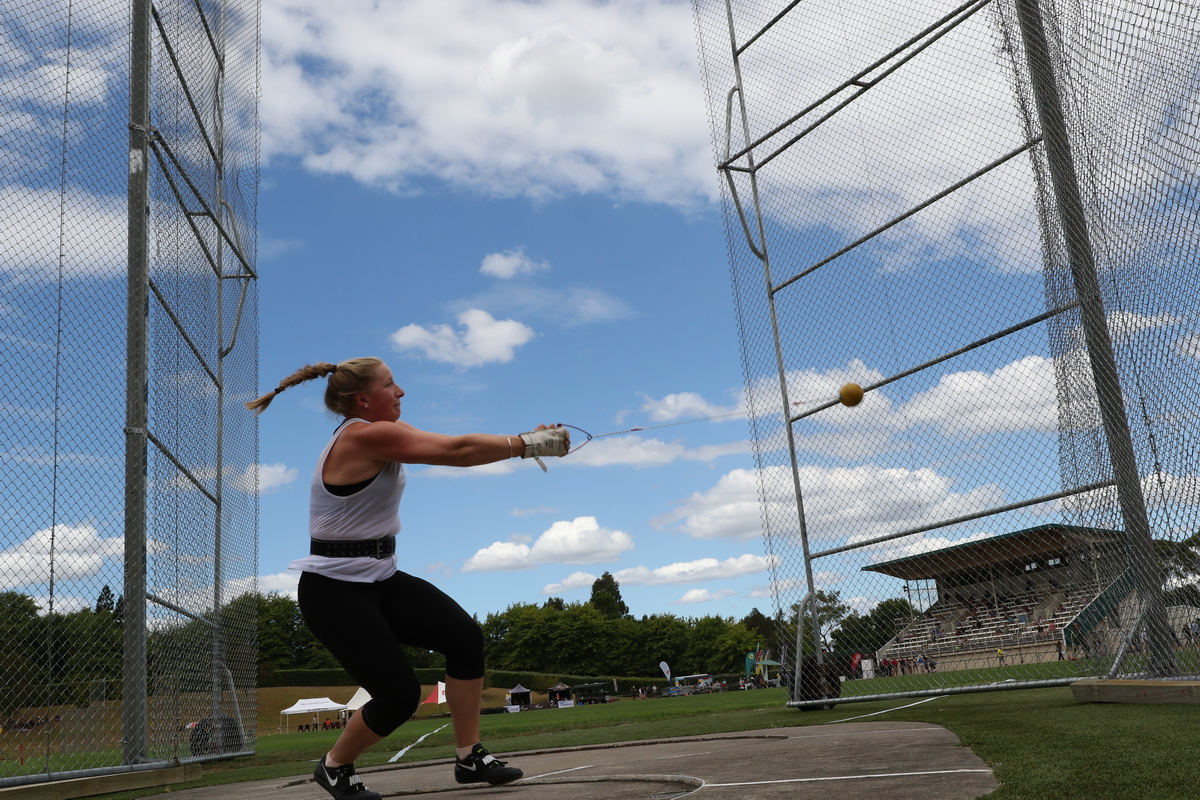 New Zealand women’s hammer record-holder Lauren Bruce has emerged as one of the stand-out stars of 2020 after her stunning performance at the Spring Series. Steve Landells chats to the 23-year-old Cantabrian to chart her journey so far.

Describing the art of throwing the hammer successfully as a little like a “dance”, it is fair to say that Lauren Bruce is leading many of her rivals a merry dance at the moment.

Her mighty New Zealand and Oceania record throw of 73.47m at the Spring Series meet in Hastings last month was one of the outstanding moments by any Kiwi athlete during the pandemic-disrupted 2020.

The performance added more than five metres to her personal best, dislodged Commonwealth champion Julia Ratcliffe as national record-holder and propelled the athlete to a new stratosphere in global throwing as she moved up to sixth on the 2020 world lists.

In short, Bruce has arrived as a major contender.

Raised on a lifestyle block, a short drive from the city of Timaru, sport has been an important part of her life for as long as she can remember.

At the age of six she took up the sport of gymnastics and two years later, after impressing at her school athletics day, she joined her local club, South Canterbury Athletic Club.

For much of her youth she successfully combined both sports. She excelled in gymnastics, competing to a national level, and also starred as an all-round athlete, although initially not as a thrower.

“When I was younger, I was more into the 60m, 200m and long jump,” she explains. “Later I competed in the high jump, triple jump and hurdles.”

Yet in her more formative years, she was far more serious about gymnastics and in 2011 she claimed a national level 7 silver medal in the uneven bars.

Her sporting career was, however, to lurch in a different direction in 2012 when she picked up a stress fracture of the back. Sidelined from sport for six months, the Cantabrian was forced into a re-think and, because of the nature of the injury, she decided not to return to gymnastics and instead focus her attention on athletics.

Prior to the injury, her first coach Ian Baird had introduced her to the throws and she found she had a talent for the discus and hammer.

“The first couple of times I tried throwing the hammer right-handed, I said to Ian ‘can I throw it left-handed?’ I tried it, and it felt way more comfortable. I think I throw left-handed because as a gymnast I spun around and did my turns clockwise.”

Her time as a gymnast had not only given Lauren a penchant for throwing left-handed. Training more than eight hours a week also gave her a strong sense of self-discipline, while the excellent all-round conditioning developed as a gymnast has stood in her good stead as an athlete.

After finishing a disappointing fourth in the hammer at the 2011 New Zealand Secondary Schools Championships when among the favourites, the Craighead Diocesan student returned the following year to strike gold in the junior event.

The following two years she finished top of the podium in the senior event to further establish her name in the sport, but she fully acknowledges the role Ian, the man who also guided Olympic bronze medallist Tom Walsh in his formative years, played in her early development.

“Looking back, he always said if you turn up at the track, I will coach you but there was no pressure to be at every training,” Bruce says.

“In some ways, it was very unstructured but, when you were there, there would always be something to work on. He encouraged us not just to throw but to try other events such as the hurdles, pole vault and javelin. He didn’t want us to focus specifically on one event.”

Moving to Christchurch in 2015 to start a Bachelor of Science degree at Lincoln University, she continued to progress in the sport. In 2016 she breached the 60m line in hammer for the first time and was selected for the discus and hammer at the World U20 Championships in Bydgoszcz, Poland.

Excited to compete on a global stage for the first time, she unfortunately threw short of her best. She wound up 23rd in the hammer with a 55.17m effort and 24th in discus (with a best of 42.30m) and offers an honest appraisal of her performance.

“I was quite young at that time and I think I just didn’t know how to compete well,” she says.

“I faced a situation competing against people from across the world, which was quite different to what I’d experienced in New Zealand. It was quite overwhelming.”

In the countdown to the World U20 Championships, on the recommendation of Ian, Lauren had started working with her current coach, Dale Stevenson.

The following year their coach-athlete relationship was formalised and there is little doubt that the thrower has greatly benefited from Dale’s expertise.

“He’s got a massive understanding right across the board,” Bruce explains.

“Not just technically but in all aspects of performance. For him, it is important to coach the person and not just the athlete.”

“Training in such an environment, there are certain standards to meet and that keeps you accountable. I’m very fortunate to have that in Christchurch.”

In 2017, she tossed the hammer out to a personal best of 60.64m and extended her discus best to 49.29m. That following year she enhanced her hammer best to 62.42m and also experienced competing on the European circuit for the first time.

While she enjoyed her overseas adventure, she returned home to New Zealand feeling deflated.

“At that point I hadn’t really figured out my reasons for doing it,” she explains.

“Part of that was I had to figure out who I was outside of athletics. I had got to a point where I was pretty wrapped up in the sport.”

With the full support of Stevenson, she took time away from athletics to assess her future. During her absence from athletics, she dabbled in some other sports and focused on completing her university degree before returning to the throws circle.

“I figured out that I still did love the sport,” she says. “At first I was a little hesitant to come back, worried that the same thing would happen again.”

However, after enjoying a good domestic season in which bettered her discus best to 54.24m, she realised she had made the right decision. At the Oceania Championships in June, she launched the hammer out to a lifetime best of 63.12m to produce another welcome performance.

In 2019, Lauren actually focused more effort on the discus than hammer. But, despite the switch in emphasis, the Cantabrian enjoyed more consistent success in the hammer. At the World University Games in Naples – while placing a distant 20th and failing to qualify in discus – she placed a respectable seventh in the hammer.

And later that year she made a U-turn to focus solely on the hammer.

“Initially I was pretty keen to try and qualify for Tokyo in both hammer and discus but I think that was pretty naive,” she admits.

“I realised I had to go all in on one and if I continued training for both, I wouldn’t qualify in either event.”

After dropping the discus, Lauren made huge progressing in the gym and technically with the hammer – all of which meant for the 2020 domestic season she returned a much-improved athlete.

She opened her campaign with a massive personal best of 67.87m in Hastings and added a further 27cm on to this mark in Sydney.

Lauren settled for second – behind Julia Ratcliffe – at the New Zealand Championships in Christchurch with a best of 63.08m, only for the global pandemic to then strike.

While her competition plans for 2020 were scrapped, she was fortunate her training programme was not too badly disrupted. She managed to successfully source gym equipment from High Performance Sport NZ and had access to a hammer circle a short bike ride from home.

But perhaps the biggest game changer was quitting her 25-hour-a-week job working for a food company in readiness for competing in Europe. While the overseas competition plan fell by the wayside, the total commitment to athletics she now enjoyed paid dividends.

“It had a huge benefit on my training,” says Bruce, who graduated from Lincoln University in 2018. “It made a big difference.”

Making her eagerly-awaited returned to competition in September for the Spring Series in Hawke’s Bay represented an important staging post in her career development.

Disappointingly, in her Spring Series opener, Lauren fell well short, hurling the hammer a best of 66.62m. However, in the seven days between competition, coach Stevenson made an adjustment which was to make all the difference.

“We changed the training load,” she explains.

“Normally before a competition we back off quite a bit, but I respond quite well to a heavier training load which we did. We decided we were okay with the outcome whether it worked or not. We had nothing to lose.”

The move proved a stroke of genius as Bruce unleashed five of the top six throws of her life, four times smashing through the 70m barrier, highlighted by a stunning 73.47m record-breaking effort in round five.

To put the performance into perspective, Lauren’s throw ranks her sixth on the world lists for 2020 – a little under 2m behind the world number one, Hanna Malyshchyk of Belarus.

The distance would have placed her in the top six at each of the past three global championships – 2016 Olympics and 2017 and 2019 World Championships – and it would have won her gold at every women’s hammer competition in Commonwealth Games history.

“It’s been a long time coming because I’ve known I’ve been capable of throwing those kinds of distances for some time now.”

Now having an extra year to prepare for the rescheduled Tokyo Olympics certainly works in the favour of the rapidly developing 23-year-old.

She also has the bonus of using the feats of New Zealand’s other international class hammer thrower Julia Ratcliffe to add as extra motivation in a friendly rivalry which could develop nicely in the months and years to come.

Possessing a naturally stubborn and determined streak, the next big goal is to secure the Olympic qualification mark of 72.50m, the period of eligibility to achieve that only starting from 1 December.

Once that is ticked off she will continue to focus on the New Zealand domestic season and, Covid dependent, hopes to go overseas to build up more experience before Tokyo.

Yet the modest South Islander believes 73.47m is only the beginning of even better times ahead.

“From 2021 and the Olympics, the competitions will come pretty fast with the World Championships and Commonwealth Games taking place the following year,” she says.

“Our aim is to get myself in a position where I can be competitive in all of them which is pretty exciting. I’ve now thrown beyond 70m and the next big barrier is 75m followed by 80m. The tape just keeps going out.”