Athletics NZ photographer Alisha Lovrich captured a treasure trove of memorable moments from the New Zealand athletes in action at the Tokyo 2020 Olympic Games. Alisha picks out a selection of some of her favourite images from inside the Olympic Stadium and just why she loves them. 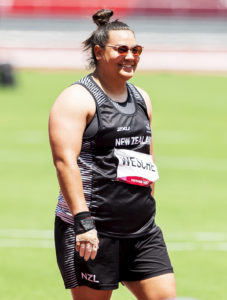 “I love this photo, it looks like she’s having the time of her life. She’s just completed the best competition of her career, having set a PB and finished sixth at her first Olympics. It was so cool she put her glasses on – classic New Zealand. Maddi looks so cool, calm and collected.” 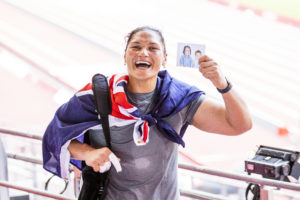 “This image is of Val in the (athletes’) mixed zone. I’m not personally in the mixed zone

but an area close by where I can take photos. Because I know Val and her friends and family could not be there to watch – part of the reaction to this photo was her seeing me (a friendly face). Having that relationship with the athletes allows me to get photos like this. The image of Val holding up the photos of her kids is the why. The story of Val is incredible – she touched the hearts of everyone by winning bronze. It was so special to see her win a medal after having two kids. It was just such a privilege to be there to be able to take this photo.” 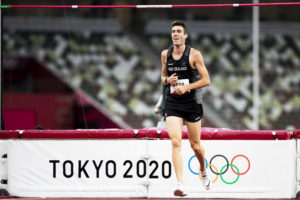 “This is Hamish moments after clearing 2.30m – just one centimetre under his PB. Obviously, he is stoked to have jumped so well in an Olympic final, but what I like about this shot is the Olympic branding, which adds context, and I also like how the mat and the bar is perfectly framing the shot. You get a sense of just how high these guys actually jump. I like the expression on his face. It is one of my favourite shots.” 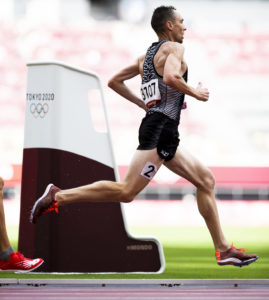 “This is Nick in the heats of the 1500m – I think I like it I because he looks so powerful and so relaxed. I love the elegance of distance runners. I also like that there is some Tokyo branding in the shot too. If you look closely, the track was a little bit wet so you can see some spray coming up as well. He looks so effortless and powerful.” 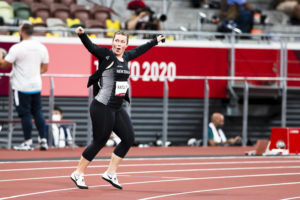 “This is Julia just after she is introduced in the stadium ahead of her final. I love it because it really encapsulates Julia’s joyous and fun personality. It reflects that Kiwi vibe of, yes, we are set to get down to business, but we are also down-to-earth and fun. She is looking up to her coach and dad, Dave and her support team.” 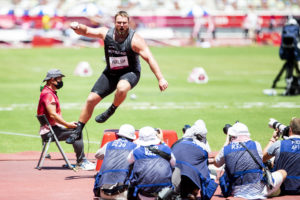 “I like this wide image. It is quite funny because it looks like Tom’s jumping over or on top of the photographers. This is the moment after his sixth round throw that when his competition is over and he knows that he has medalled. He is super happy he has won back to back Olympic medals. It was nice to be able to capture such cool emotion.” 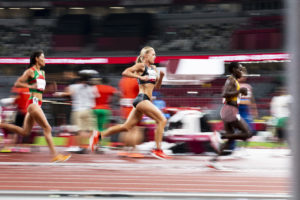 “They are hard to get but I love a good pan photo and this is Camille Buscomb in the heats of the 5000m. Actually one of the blurry people behind Camille is Val – who was competing in the shot put qualification at the same time. With this photo you get a real sense of the movement and how quick the athletes are running.” 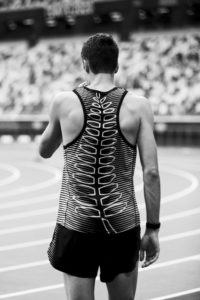 “Isn’t the New Zealand singlet awesome? High jumpers are one of the few athletes not required to wear a number on their back, so this was my only chance to get a clean image of the back of the singlet. I like it in black and white – it is classic New Zealand. Knowing what the Silver Fern represents it is cool. I like photographing those little details and athletes with Olympic rings as a necklace or Olympic rings as a tattoo.”