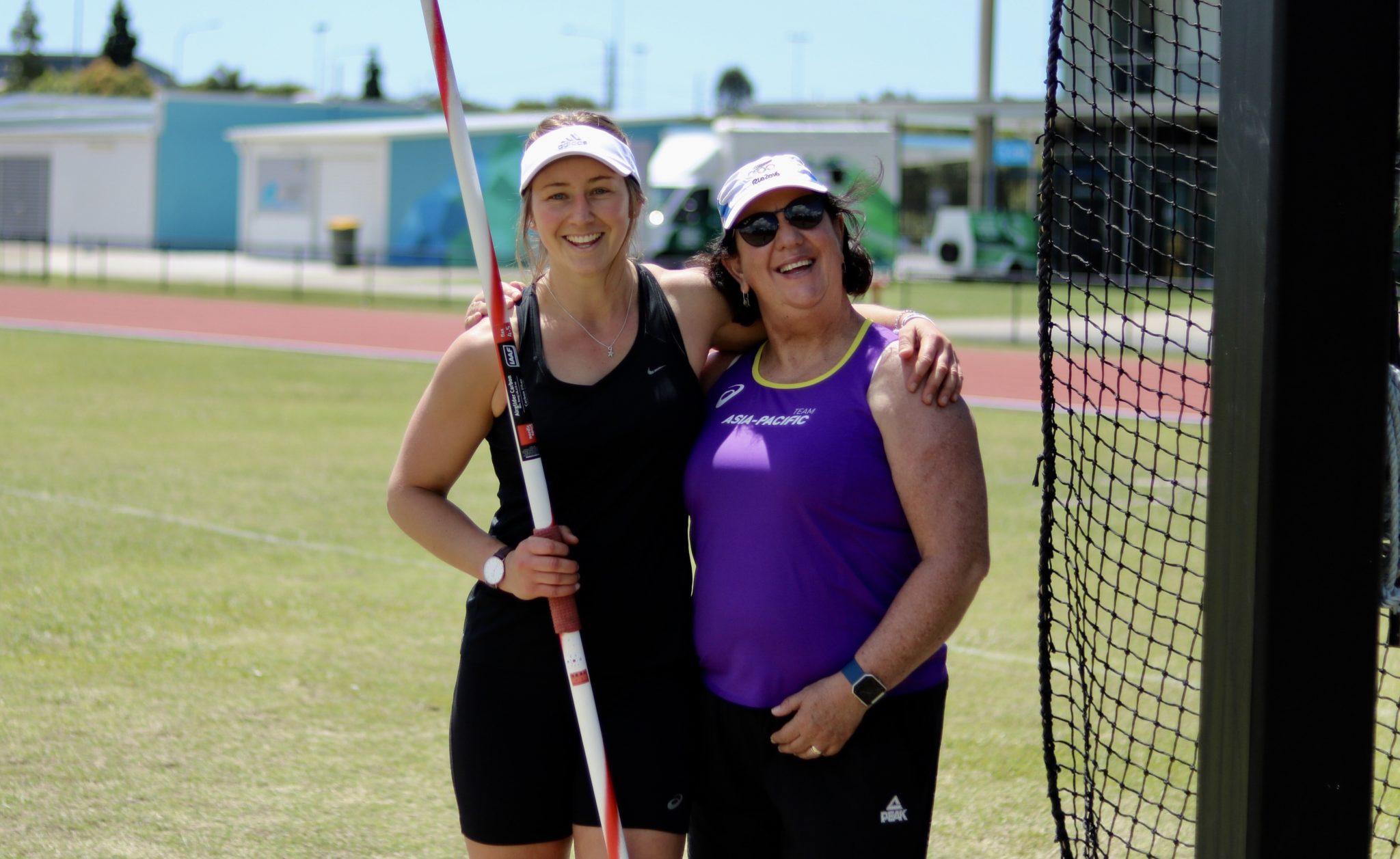 Debbie Strange with one of the athletes she coaches, javelin thrower Tori Peeters

Leading throws coach Debbie Strange has had her many years of commitment recognised by being named 2020 recipient of the Arthur Eustace Award for Coaching.

She becomes just the second ever person to be honoured in such a way, following in the footsteps of inaugural winner and Southland coaching stalwart Lance Smith.

Debbie was granted the award at the Athletics New Zealand AGM – held at Bruce Pulman Park in Auckland last Sunday – but was not able to attend as, in keeping with her dedication, was busy serving the sport.

“Sorry I can’t be there as I’m running the Sam Johnson Throws Meet in Hamilton, a competition designed for all throwers, especially the ‘schoolies’,” she said in a statement.

“I’m extremely honoured to receive this award as I have great respect for Arthur Eustace, who was passionate in his support for coach education and was the founding father of coach education in New Zealand and the Oceania region,” she added.

“Arthur demonstrated an extremely high set of professional values and I have tried to reflect these values, especially those of fairness and inclusivity, with an absolute commitment to drug-free sport.

“I feel privileged to work in the area of sport and concentrate on growing people – athletes, coaches and officials alike – to be the very best they can be, as well as good contributing members of our communities and society in general.

A leading throws coach for over four decades, Debbie has helped develop the careers of the likes of Beatrice Faumuina (discus) and Stuart Farquhar (javelin). She has attended a number of Commonwealth Games, World Championships and Olympic Games as a team coach or official. She has also been instrumental in educating coaches throughout the Oceania region and is a life member of the Oceania Athletics Association.

A long-time member of the Hamilton City Hawks athletics club, Debbie is still coaching in the Waikato-Bay of Plenty region.

She was announced as recipient of the award by the late Arthur’s wife, Anne Bennett-Eustace, who paid tribute to her impact on all levels of athletics.

“Debbie has coached at the highest level, having produced Olympic finalists, yet is still willing to work with beginner and developing athletes,” she said.

“She has been a huge supporter of coach education and has played a leading role within the World Athletics coach education structure. She has advocated strongly for coaches within national and international organisations and has always maintained, as a primary focus, the needs and aspirations of her athletes.

“She has supported and mentored many coaches, including most recently Regan Standing and Ashleigh Sando. In the Waikato-Bay of Plenty centre, Debbie has facilitated many coach and athlete development activities, including the highly-successful ‘Throw Like a Girl’ event held earlier this year. She runs activities that include masters, Para and youth, such as the annual Sam Johnson Throws Meet, which Debbie has run for the last 30 years.

“She is therefore a fitting candidate for the Arthur Eustace Award for Coaching as she epitomises the same values in her work.”

Debbie faced stiff competition in being singled out for the award as the judging panel received 30 nominations for 16 coaches.

“The calibre of the nominees was excellent and a short list of six coaches was finalised before an agreement was reached on this year’s winner,” explains Annette Purvis, panel member and former Athletics NZ Board Chair.

“On behalf of the panel, I would like to thank all those that took time to nominate their coach. The role of a coach is incredibly important and it is heartening to see not only the recognition of these coaches but to read first-hand the impact they are making.

“I would encourage all clubs and centres to find ways to regularly recognise and value their coaches.”

Arthur was a founding member of the Athletics NZ Coaches’ Association and an inaugural inductee into its Hall of Fame in 2006. He was instrumental in World Athletics establishing a Coaches’ Commission and was also Athletics NZ Patron from 2009 to 2018.

The Arthur Eustace Award celebrates coaches who demonstrate the values Arthur held around coaching athletics and who also exhibit the behaviours that support Athletics NZ’s core beliefs around coaching.