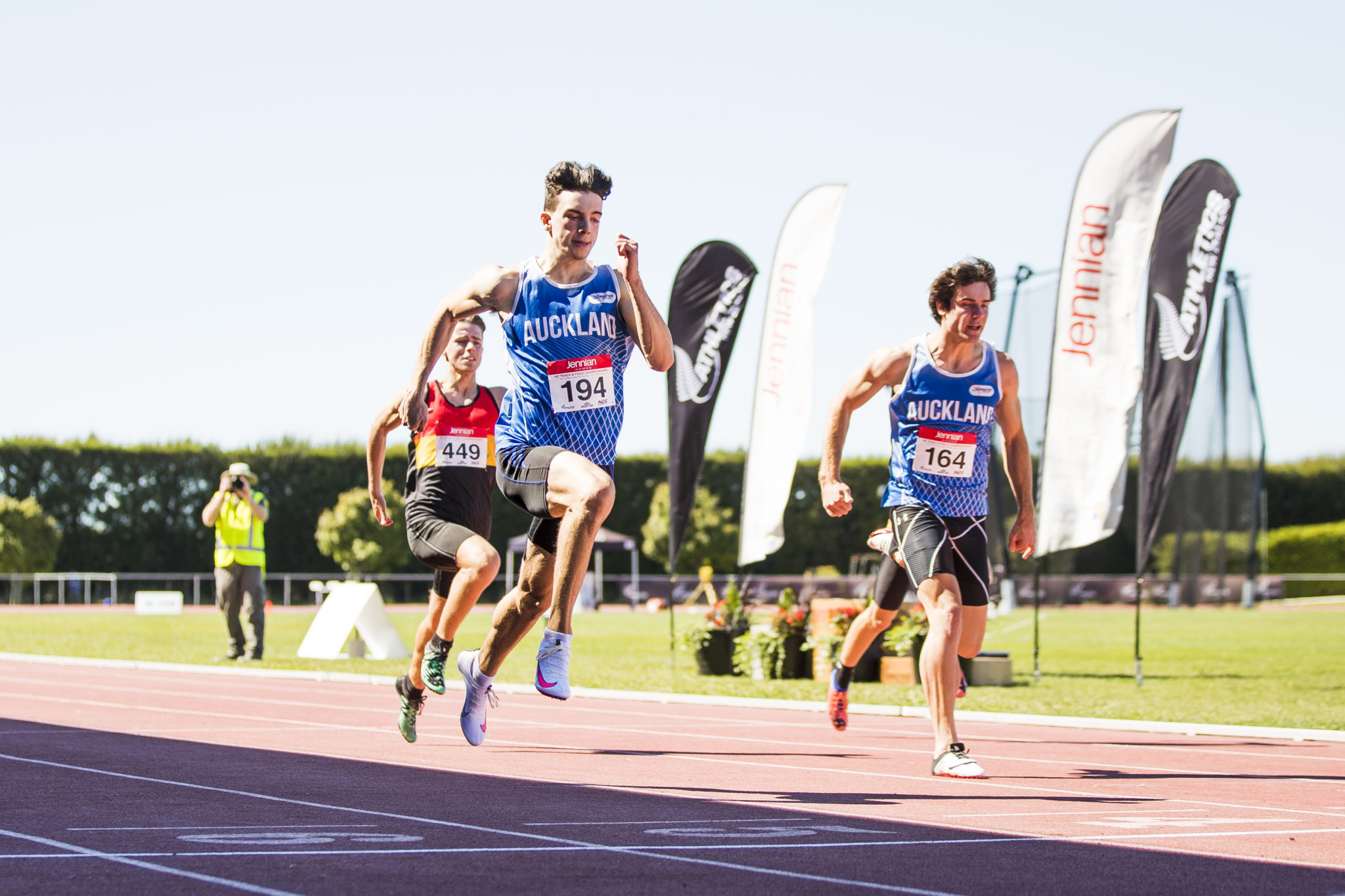 Teenage sprinter Tommy Te Puni enjoyed an outstanding season, rounding it off by successfully defending the 100m/200m U-20 sprint double at the Jennian Homes New Zealand Track and Field Championships. Steve Landells chats to the 19-year-old Aucklander about his background, athletics journey and hopes for the future.

Many factors contribute to the success of an athlete. Discipline, resilience, perseverance, adaptability and a strong work ethic are commonly regarded as pre-requisites – yet one often overlooked determinant is genetics.

National U-20 100m and 200m champion Tommy Te Puni has a strong set of genes to draw upon in the shape of his father, Roger Te Puni, a former New Zealand high jump international.

During a long and distinguished career, Roger won 11 national titles and achieved a PB of 2.24m – which still sits third all-time on the New Zealand rankings. He also represented his country twice at the Commonwealth Games (1982 and 1990), as well as competing at the 1991 World Championships in Tokyo.

Of course Tommy, his second eldest of three sons, is excelling as a sprinter and not a high jumper but there is little doubting the similarities and the Auckland University Bachelor of Commerce student admits his father’s accomplishments act as a huge motivation.

“I had an idea that my dad did athletics and was pretty good when I was young,” he explains.

“But it was only when I got to the age of 16 did I start to realise how good. We have now turned it into a bit of a competition. He still has some PB’s better than me like for the 60m (Roger has run 6.87), his standing long and triple jumps are better than mine and he’s still got the hurdle hopping PB. He’s always holding those over me. But one day I’d love to take those from him. I want to beat him at everything.”

Raised on Auckland’s North Shore, Tommy joined the North Harbour Bays club from the age of seven and quickly started impressing as a sprinter. Club titles and Auckland honours quickly followed and at the age of eight he first came into contact with long-time sprint rival Dominic Overend – the man he beat to U-20 gold over 100m and 200m at the Jennian Homes New Zealand Track and Field Championships in March.

Despite making an early impact, sustained success did not follow. For much of his youth, knee issues hampered his development while basketball was his number one sporting priority.

A quality basketballer who played starting five for Rangitoto College, Te Puni also made the U-17 New Zealand training squad.

Athletics still featured but largely as a summer-only activity. Training a maximum of just three days a week, he nonetheless hugely hinted at his potential at the 2016 New Zealand Secondary Schools Championships. Competing at the Trusts Arena in Auckland, he won the junior boys’ 100m bronze and finished fifth in the 200m despite fracturing his wrist just two-and-a-half weeks earlier in a basketball-related accident.

“It was the first time I’d won anything in a big athletics competition that actually meant something,” he explains.

“I remember the 200m final was my eighth race in two days, but it was all a bit much for me because I pulled my hip flexor coming out of the blocks (he still finished fifth). I was still a first-year junior at the time so I was still satisfied with my performances.”

For the next few years, basketball remained the main focus, although he competed intermittently in athletics under the coaching of Warwick Fenton.

However, he recalls the opportunity he had to attend the Aspire Academy in Doha, Qatar as a part of a two-week trip in 2018, led by New Zealand sprints coach Kerry Hill, as playing a role in determining his future sporting commitments.

“I went along with a group of other sprinters and we saw (Mutaz) Barshim (the Qatari athlete and world high jump champion) at one of the meets, which was pretty cool. That started the shift to maybe thinking about a future in athletics.”

Yet it was only in October 2019 that Tommy finally opted to quit basketball and focus 100 per cent on athletics – a decision which in the end was a relatively straight forward one for the young sprinter to make.

“I figured I’d have more success in athletics rather than basketball, so that is why I decided to commit to one sport to see how far I could go.”

Under the fresh coaching guidance of Rob Mallinder, the young sprinter switched overnight from training “a maximum of three times a week in the summer” to five or six times a week. It was a big change but a necessary one as Tommy sought to fulfil his talent.

Undergoing a weight programme for the first time in his career and a more structured training programme quickly reaped rewards for the teenaged Aucklander.

At Nga Puni Wai on a cold night, he ran the 100m final in 11.04 (10.85w heat) and then ran a wind-aided 21.25 to take the 200m but the ever-demanding athlete says of his golden double: “I was happy with the medals but I’m never really satisfied with the performances”.

Under his first full winter’s training with Rob, Tommy worked hard building a strength base while the pair also identified a need to develop the first half of his 50m.

Pre-Christmas, Tommy showed signs his hard work was reaping rewards. He shaved 0.04 from his legal 100m PB to run 10.93 at a McKinnon Shield meet in October and a rare foray into 400m – when he ran a PB of 49.10 – underlined his versatility.

“It was cold and windy and it went quite well. I don’t want to blow my own trumpet but I felt like I could have maybe won gold at nationals (U-20) for the 400m as well. I was hoping to run another 400m in 2021 but we didn’t quite have the opportunity to pursue that.”

The 2021 campaign ran like a dream for Tommy. After setting a 100m PB of 10.89 for fourth at the Cooks Classic in Whanganui, as well as a second in the 200m (21.42w), he equalled his 100m time when fifth at the Porritt Classic in Hamilton along with another second in the 200m. On his return to Porritt Stadium at the Waikato Bay of Plenty Championships in February, he carved a further 0.14 from this 100m time and also set a 200m best of 21.42.

At the rescheduled New Zealand Track and Field Championships in Hastings, he then successfully managed to maintain his form to defend the U-20 100m and 200m crowns ahead of Overend in wind-assisted marks of 10.70 and 21.46 respectively.

“It was a different feeling than the year before because this time I was trying to defend my titles,” he explains of the 2021 national double.

“This time I had something to lose and I was more nervous. Dominic got out really quickly in the 100m, and I had to keep my composure and haul it back in the second half of the race. It was satisfying to win that. Dominic got a good start again in the 200m but my speed endurance came through and I was happy to win.”

Standing at a little over 6ft 5ins – coincidentally the same height as sprint icon and world 100m and 200m record-holder Usain Bolt – Tommy remarks that his ‘speed endurance’ is one of his strengths.

Preferring the 200m to the 100m, he nonetheless acknowledges he needs to lower his 100m time to improve his 200m and, despite only a very brief flirtation with the 400m so far, intriguingly he may consider pursuing the one-lap event in the future.

“I’ve definitely got the long legs for it,” he says.

“Ultimately, speed is king. I’ve got to get my flat speed down before I can be successful in the 400m.”

Last month he made a coaching switch on the recommendation of Rob to join the training group of Elena Brown – which interestingly includes national 400m champion Hamish Gill, a recent convert from 100m and 200m sprinting.

Rob suggested the move to tap into Elena’s knowledge base and so far Tommy is carrying out far more endurance work than in the past – including some 3km runs and gruelling stair climbs at Muriwai Beach.

“So far she has been really accommodating in terms of how I’m feeling in training and will adjust the schedule accordingly,” he says.

Having just celebrated his 19th birthday last month, Tommy is part of a wave of young Kiwi sprint talent led by the likes of Eddie Osei-Nketia, Tiaan Whelpton, Cody Wilson and Shay Veitch and, supplemented by the more experienced Joseph Millar, the group could usher in a golden period for New Zealand men’s sprinting.

Tommy himself is excited about what the group can achieve in the 4x100m relay in future but the North Shore-based athlete is not getting too far ahead of himself and is looking to improve over the winter months under new coach Elena.

“In the past, I’ve had problems with my knees which has restricted the work I can do bounding but I’m doing more of this and it will help my single-leap strength tremendously. I also want to work on my fitness and strength endurance, every area to make sure I’m fast for the next summer season.”

In the longer-term, the talented teenager has aspirations to compete at the World Championships and Olympic Games. While he faces a long journey ahead to reach this target, he has the ideal mentor in his father to keep him level-headed and on track to achieve such goals.

“My father has always been very supportive and comes to nearly all the meets,” Tommy explains.

“He likes to see me succeed and I like to succeed as well, so I feed off that. He emphasises the importance of being patient, not to get too up and down, and to just keep progressing.”

It’s advice he would do well to heed as he looks to make his mark on the New Zealand athletics landscape – just like his father.