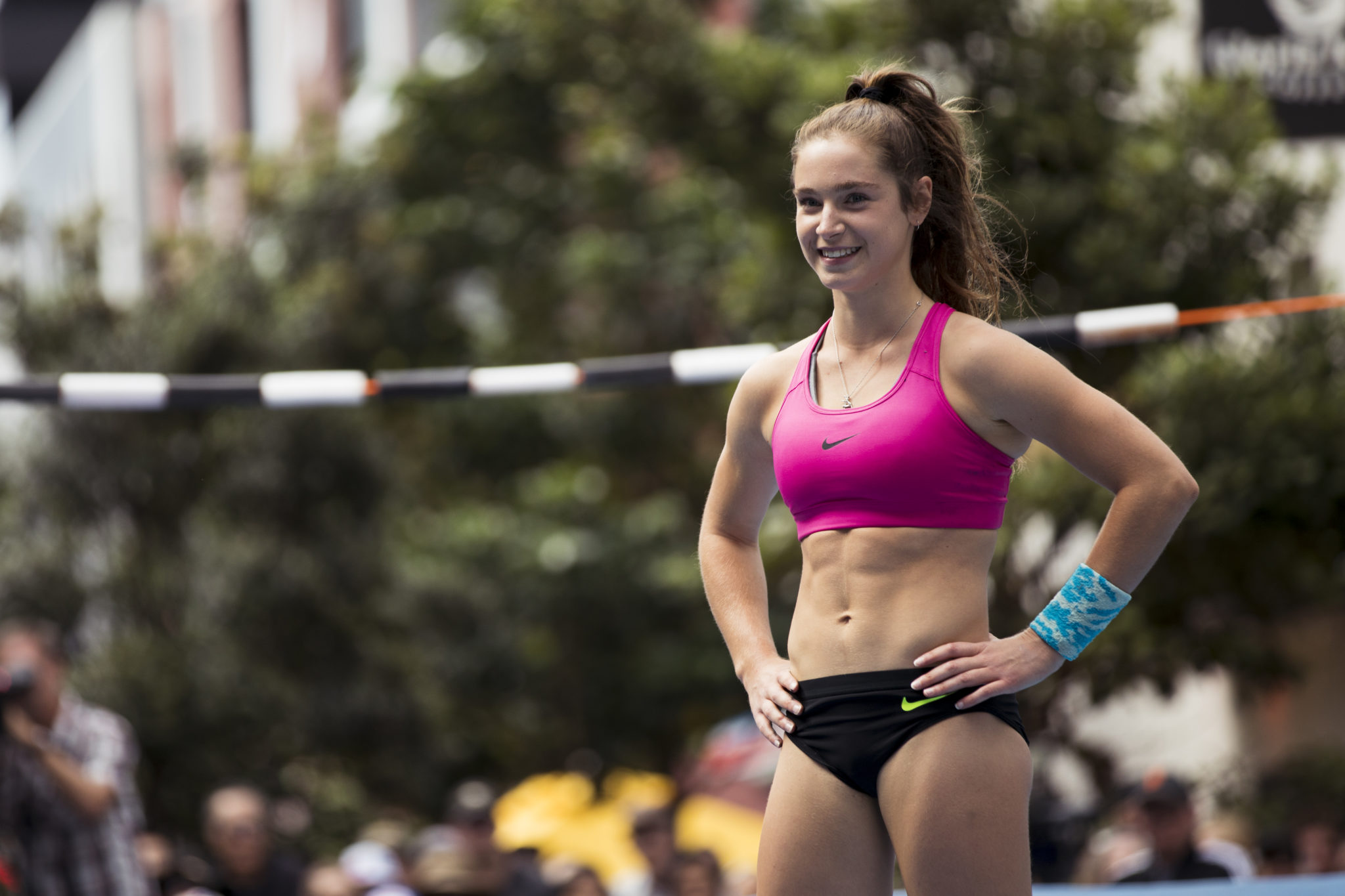 Pole vaulter Imogen Ayris produced one of the outstanding performances of the early phase of the domestic summer season with a breakthrough 4.50m clearance. Steve Landells chats to the 20-year-old Aucklander and finds out more on the tragic inspiration behind her stunning display.

When Imogen Ayris improved her personal best by 20cm at Mt Smart Stadium last month to catapult herself to number two on the all-time women’s New Zealand pole vault rankings, a multitude of factors contributed to her breakout performance.

A prolonged period of consistent training undoubtedly played a role, during which she made significant technical improvements under the guidance of influential coach Jeremy McColl.

Meanwhile, another factor could have been switching from carbon fibre to fibreglass poles.

Yet, above all else, it was perhaps the memory of loving father Barny, who lost his life to cancer in September, which acted as the catalyst for her outstanding display.

“After he died, everything in my life changed and I knew that nothing was going to be normal again,” Imogen explains.

“He was my number one fan and travelled the world to watch me compete.

“Yet, through all of this, the one thing that has helped has been training. It has acted as a positive distraction – it has given me purpose and structure.”

Fittingly, by advancing her PB from 4.30m to 4.50m in one competition at Mt Smart Stadium, she produced the kind of performance which would have made her father immensely proud.

Raised the eldest of two children in Northcote Point on Auckland’s North Shore, sport has been as big a part of her life for as long as she can remember.

Hailing from a sporty family – her mum Bridget was a Maadi Cup double sculls champion rower and father a county representative in football and rugby in the UK – Imogen played netball and basketball and took up athletics from the age of six at Takapuna Harriers. She quickly discovered a talent for high jump, long jump, hurdles and sprints, winning club titles and setting several age-group club records which still stand today.

But during her younger days her main passion was gymnastics and she represented New Zealand in a Trans-Tasman international against Australia as a child.

“Gymnastics was definitely my main sport growing up,” she explains. “I was a power gymnast, a good tumbler and vaulter. I used to train insane hours, about 18 to 20 hours a week.”

But Imogen also loved athletics and can pinpoint the precise moment when her sporting career was to lurch in a different direction.

“I qualified for the high jump, long jump, hurdles and 100m and I just remember having the time of my life,” she explains. “I really enjoyed the atmosphere and loved competing. I won a bronze medal in the long jump, and came home from that trip and said, ‘I want to be an athlete and focus on athletics’.”

Virtually overnight, the Takapuna Grammar School student quit gymnastics. Athletics was now the main sporting pursuit and within weeks of making that decision she was introduced to the pole vault.

Her hurdles coach at the time, Warwick Fenton, had asked if Imogen was keen on trying the event – which was coached at AUT Millennium by Jeremy McColl, the man who guides 2016 Olympic bronze medallist Eliza McCartney.

Imogen was aware of the event and leapt at the opportunity to give it a go.

“I thought it seemed like a pretty cool idea,” adds Imogen. “With my gymnastics background I was used to throwing myself in the air and being upside down, so it made sense.

“I fell in love with the sport straight away. Jeremy is a great coach and given my gymnastics background I picked up the basics very quickly.”

In her first competition she cleared a highly respectable 2.90m – despite competing off a short run up and in flats – at AUT Millennium in May 2014.

It was a very positive start and engendered in her a special feeling.

“When I cleared the bar it genuinely felt like I was flying,” she adds. “Since then, I’ve constantly tried to chase that feeling. It’s addictive.”

Within just six months of taking up the sport, she had cleared a best of 3.60m and also won a bronze medal at the New Zealand Secondary Schools Championships in Wanganui.

More success continued in the second half of the 2014-15 domestic track and field season as she secured her maiden national title with victory in the U-20 division at the New Zealand Track and Field Championships in Wellington. Striking gold with a PB of 3.70m at the age of just 15 at the time was a huge breakthrough moment for the Aucklander.

“It was pouring with rain and I was still very much in my honeymoon period with the pole vault,” she recalls. “I was improving rapidly and at that time so in love with the sport.” 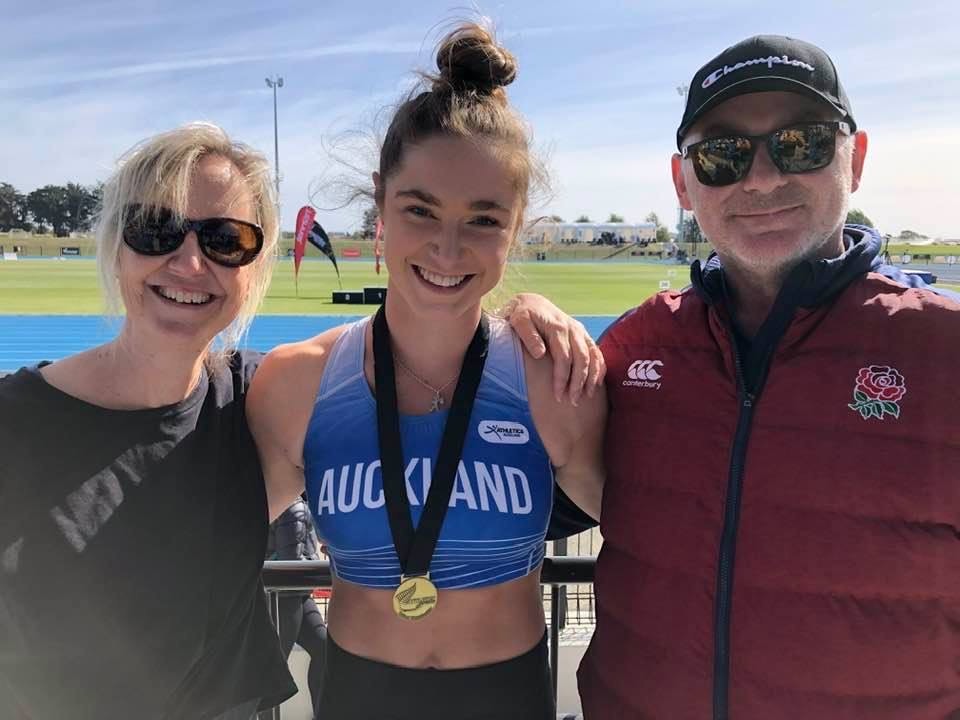 Imogen Ayris with mum Bridget and late father Barny, whom she describes as her biggest fan.

In 2016, she achieved the landmark height of 4.00m for the first time when winning silver at the New Zealand Secondary Schools Championships behind her training partner Olivia McTaggart.

In 2017, she clad another 5cm on to her personal best and the following year earned her first national senior title, claiming victory in Hamilton with a 4.15m clearance and later that season improving her PB to 4.20m.

“I first cleared 4.20m at the Vertical Pursuit but this was not deemed legal because it was a slightly downhill track. Then a couple of days later at the Sir Graeme Douglas Track Challenge in Auckland I cleared 4.20m again. It was a huge relief to clear that height legitimately for record purposes.”

Imogen secured selection for the 2018 World U-20 Championships in Tampere, Finland and prepared for an extended stint in Germany, training alongside her training partners Eliza McCartney and Olivia McTaggart.

The Takapuna Harrier & AC athlete had prepared well, only for an ill-timed mishap to occur during a practice session when she badly damaged her heel landing just several days before her competition in Finland.

On the morning of her qualification, she was still hobbling around on crutches but despite this bravely took to the runway to compete.

“Whether it was the pain killers or the adrenaline, something came over me,” she explains. “I had tunnel vision and was there to do a job.”

Competing in a high level of pain, she managed to clear her first two heights but exited the competition at 4.10m, failing to advance to the final.

It was only a couple of weeks later she discovered she had fractured her heel bone and underwent a prolonged period of rehabilitation.

Impacted by her disrupted build up to the 2019 domestic campaign, Imogen understandably struggled to meet her standards of the previous year.

Later that year she did, however, experience her second global competition by clearing 4.11m to finish tenth at the World University Games in Naples and has many fond memories of the event.

“The event was an even bigger set up than the World Juniors,” she explains. “The World University Games had athletes competing from many different sports and we all stayed in the village, which was on a couple of cruise ships. It was incredible to be around such talented people from all kinds of sports.”

Unlike the previous winter, last year she enjoyed an excellent build up and hit the ground running in 2020. In her opening competition in Hastings, she added 1cm to her lifetime best. In Canberra in February, she soared out to another PB of 4.30m and in Christchurch in March she regained her national senior title with a 4.25m.

All set to complete her competitive campaign for the 2020 summer season in Australia, her plans were blown apart by the global pandemic.

“I was hoping to put out some big heights, so it was gut-wrenching (when Covid hit),” she says.

Under lockdown, the University of Auckland Physiology and Exercise Science student took a short post-season break. She carried out some longer runs – “Well, only 5km, but long for a pole vaulter who only has to run 33m” – before returning to the bosom of her world-class training group once the restrictions were lifted.

Making some technical improvements and – on the recommendation of her coach – also switching to fibreglass poles have played significant roles in her improvement.

“They are heavier and thicker to hold, they are quite different. It suits my jumping style and works quite well,” she says.

In her first competition of the year at AUT Millennium in October, she soared over 4.20m to equal her PB off a shortened 12-step run up.

Then, operating at her full 16-step run up at the same North Shore venue, everything clicked in her second competition of the season.

“It was nerve-wracking on the day because I wanted to show everyone my potential,” she says.

“When I cleared 4.30m, it was like, I want more. When I cleared 4.40m it was more of a relief because I’d been clearing that height regularly in training. Then when I went over 4.50m it was unreal. I was over the moon and it recreated that feeling of flying I’d experienced in my first competition.”

“Buzzing” since the 4.50m clearance, she moves on to the rest of the season quite rightly confident of better.

She says the 4.70m Olympic qualification is a possibility but, rather than look too far ahead, she simply wants to continue to train hard and progress.

Yet her success is even more remarkable when you consider the backdrop of her father’s tragic passing in September.

Athletics has undoubtedly played a part in her healing process and she takes satisfaction from the thought he would be enormously proud to have witnessed her soar over 4.50m.

“He was an incredible guy,” she says of her father, who worked as a private investigator for an insurance company. “The most amazing dad I could have wished for. He was so funny, loving and caring. He was my biggest fan, always supporting me and he loved attending every competition. Without doubt he was my biggest inspiration.”