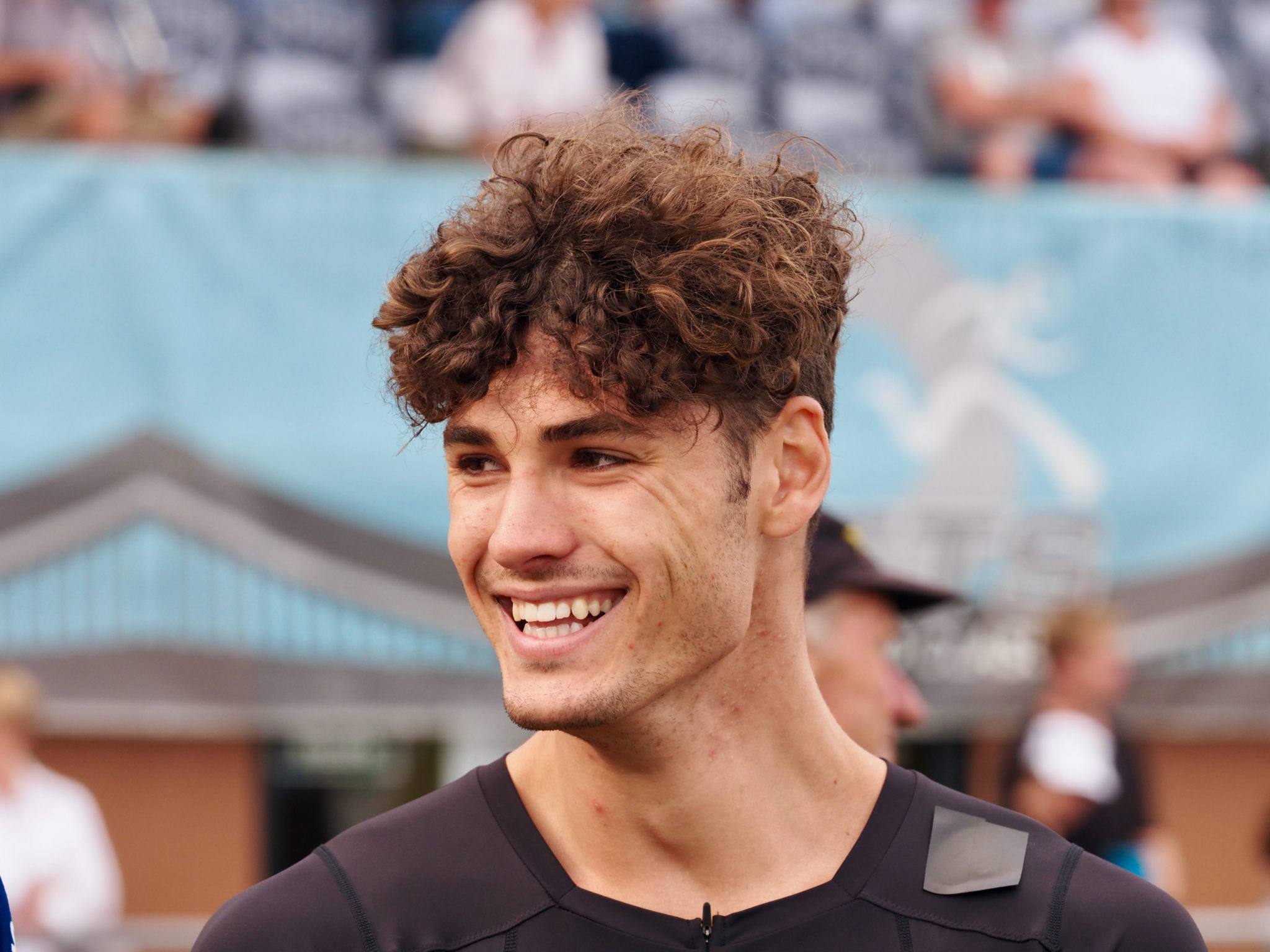 New Zealand’s latest sprint sensation Tiaan Whelpton has been one of the most compelling storylines of the domestic track and field season so far. Steve Landells caught up with the Christchurch-based speedster to find out more of his story.

We have to be a little careful when drawing similarities between any sprinter and the incomparable Usain Bolt. But, in the case of New Zealand’s latest sprint star Tiaan Whelpton, there is at least some justification.

Standing at around 6ft 5ins tall, both Whelpton and Bolt are similar in height. Both possess a long stride and, dare we say it, their technique is also probably a little unorthodox.

“Usain Bolt is my hero, not because he is the fastest ever but because of our similar build,” Tiaan admits.

“People look at Usain and say he shouldn’t be so fast because he doesn’t run with the perfect technique. But he doesn’t worry about it, he just tries to run as quickly as possible and I do the same. I am tall and I too have a strange technique with a tendency to run from side to side a little.”

Tiaan also shares another similarity to the world 100m and 200m record-holder – a height which allows him to cover the distance in fewer steps than many of his rivals.

“The only difference is that Bolt was quicker off the ground. So, in order to become a better sprinter, that is what I need to focus on.”

Tiaan, who currently leads the New Zealand rankings for the 100m, faces a heavy competitive schedule in the next few weeks as he targets Saturday’s Porritt Classic, followed by the Canterbury Championships and Sir Graeme Douglas International, then climaxing with the Jennian Homes New Zealand Track and Field Championships in Hastings next month.

But just who is New Zealand’s latest sprint sensation?

Born and raised in the town of Somerset West just outside of Cape Town, Tiaan was immersed in sport for as long as he can remember. Rugby, in which he played wing and full back, was his first sporting choice but he also adopted the speed from his father, Chris, a former 10.71 100m sprinter.

He impressed in primary school athletics days and further developed his sprinting ability in 2010 after relocating with his family to live in Christchurch at the age of ten.

For the next two years he lived in the Garden City and competed as a sprinter/jumper, performing at the Colgate Games.

But a job transfer for his father took him to the UK for the next three years before Tiaan completed his schooling back in South Africa.

Going through puberty late and suddenly undergoing a growth spurt at the age of around 16 was to have a hugely positive impact on his athletic development. At that point chiefly a long and triple jumper, he only decided to focus on sprints at the age of 17 on the advice of a local coach.

“I was doing some stride outs in a training session at the start of the 2017 season when one of the coaches said to me, ‘You look pretty fast, have you thought about the sprints?’ I said, ‘Yeah, I feel pretty fast’. That’s when I started to focus on sprinting. The following year I ran 10.61 to reach the South African high school 100m final and I have not looked back since.”

In late-2018, Tiaan and his family decided to settle permanently in New Zealand and returned to Christchurch. Early the next year, he took up a geosciences degree at the University of Canterbury and to further develop his career he came under the coaching of Athletics NZ coach Terry Lomax.

In his first full season back in New Zealand, Tiaan made a real impact, winning the national U-20 100m title on his home track at Nga Puna Wai in a time of 10.73.

Hamstring injuries restricted his competitive schedule for the 2020 season but he still managed to impress at the New Zealand Championships, snaring a senior 100m bronze behind Eddie Osei-Nketia and Hamish Gill.

“I was stoked to achieve what I did with a niggly hammy,” Tiaan says of the 2020 nationals.

“I decided not to run the 200m because I’d already run the heats of the 100m and relays and then the aim was to run at Aussie nationals.”

But his plans to test himself in Australia fell victim to the global pandemic which led to the widespread cancellation and postponement of events.

Using last winter to focus on building his strength, Tiaan has added about 9kg of bulk and now weighs in at around 89kg. He has also ironed out ongoing hamstring and shin splints issues and has emerged for the 2020-21 domestic season in great shape.

The following weekend he ran a legal 100m time of 10.50 to win in Christchurch before he moved on to the Potts Classic in Hastings to face his biggest test of his season to that point.

He passed the examination with flying colours on the fast track at Mitre 10 Park, trimming 0.09 from his lifetime best to record 10.37 in the heat before returning to win the final in 10.47, defeating all the other heavyweight New Zealand sprinters – Osei-Nketia, Joseph Millar and Hamish Gill.

“I was hoping to hit a personal best and it felt like I was tracking towards that having run 10.50 the weekend before,” he explains.

Having scorched to a blistering new PB in the heats, did this then bring more or less pressure for the final?

“After setting the PB in the heat I thought I could go home happy whatever happened in the final. But I did face some new expectations that I could possibly win the final and got a bit nervous.”

He maintained his cool in the final, getting away to a blistering start and then proving uncatchable, finishing 0.14 clear of second-placed Eddie. Not that Tiaan takes any particular satisfaction from beating Eddie. The pair are good mates, they’ve spent periods training together and Eddie stayed with Tiaan in Christchurch in preparation for last weekend’s International Track Meet.

“It can often depend on who has a good or a bad start. Any one of the top four sprinters in New Zealand has a good chance of taking the nationals this year.

“I’m good friends with Eddie and I know Joseph is really excited that he has other sprinters pushing him because he led the way for a long time and there was no-one close to his level. It is great we are all pushing each other. I think this has really exciting implications for the relay as well.”

At his most recent outing at the ITM in Christchurch last weekend, the part-time student showed his growing versatility by setting a 200m PB for second in 21.28 – just 0.04 behind Eddie after leading for much of the race.

In the future, he plans to explore the 200m more and believes he has untapped potential over the half-lap distance, although in the shorter term the 100m remains his priority.

With training partners including the likes of national women’s 200m silver medallist Rosie Elliott, 400m hurdler Louis Andrews, national U-20 200m and 400m medallist Maia Brougton, heptathlete Helena Dinnissen, Hilary Harper and Elliot Nye, he believes he has a ‘fantastic group’ to work with and is looking forward to the remainder of the season with the main goal the New Zealand Track and Field Championships in Hastings.

“I’m focused on training hard and staying injury-free. I’d be happy to walk away with a national medal again, that would be a privilege, although I definitely think I’m more of a contender than I was last year,” he says.

After spending two years in New Zealand from the age of 10 to 12, he always relished his time in the country and was delighted when his parents made the decision to return in 2018.

Now the owner of a New Zealand passport, Tiaan is a proud Kiwi and at the age of 20 has some big ambitions for the future.

“A life goal of mine is to attend the Olympics and, although this year’s Tokyo Games is probably too soon, I’d love to compete in Paris 2024 and at the Los Angeles Games four years later. I’d also love to get my Black Singlet and represent my country.”

But what is it about sprinting fast that spins Tiaan’s wheels?

“The training is fun and at the end of the day the 100m is the big, glory event,” he explains.

“Unlike the longer distances, I don’t have to run multiple times around the track. It is just running down the track once, I really enjoy doing that.”