On the eve of the NCAA Division II Championships in Allendale, Michigan (26-28 May) we turn the spotlight on Kiwi sprint talent Leah Belfield. Steve Landells spoke to the Waikato athlete about her time in the US and hopes for the future.

2022 has been some season for the women’s sprinters in New Zealand. From the record-breaking accomplishments of Zoe Hobbs to the efforts of the likes of 200m specialist Georgia Hulls, Isabel Neal and the versatile Rosie Elliott, who banked national 100, 200m and 400m medals, there is little doubting the strength of New Zealand sprinting.

Yet in the uber-competitive world of collegiate track and field in the US another Kiwi has been making her mark this year in the shape of Leah Belfield, whose presence adds even greater depth to our enviable sprinting stocks. 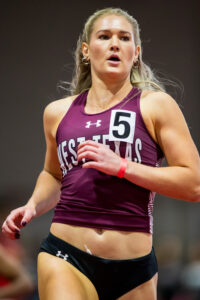 She has since transferred this excellent form into the outdoor season, posting PB of 100m (11.48) and 200m (23.65) – which places Leah number two in New Zealand in both events behind Zoe Hobbs and Georgia Hulls, respectively.

Born and raised on a dairy farm in Arohena near Te Awamutu in the Waikato, Leah has been engaged in sport for as long as she can remember. Good enough to represent Waikato in rugby, volleyball and equestrian as a schoolgirl her athletics journey did not begin until she was a Year 9 student at Te Awamutu College.

“Murray Green, who coached at the Te Awamutu club and officiated at the school meets saw me win the school races, he asked me to come along to club nights,” recalls Leah. “I’d not really done an individual sport before, but I thought it was different, fun and I was good at it. I really liked working on my technique and how training hard would reap results.”

In 2015 she produced a breakthrough performance at the New Zealand Secondary Schools Championships in Timaru when completed the junior girls 100m and 200m double – a display which gave her the belief and motivation to pursue the sport more seriously in the future.

Her age group career was littered with national medals and in 2019 she delivered the U20 sprint double (100m/200m) in Christchurch with an impressive all-round display of sprinting excellence.

Yet her athletics highlight during her time in New Zealand came when she representing New Zealand at the Oceania Championships in Townsville later that year – where she won U20 100m bronze and placed fourth in the women’s U20 200m.

“It was my first time competing in the New Zealand singlet, which was special,” she recalls. “Previously I’d only seen myself as an athlete who could win school races, but to compete with a New Zealand shirt on my back was a pretty cool experience.”

That year in Wellington, Leah also featured on the same 4x100m team as Zoe, Georgia Hulls and Symone Tafuna’i– so how does she reflect on the success women’s sprinting has enjoyed in New Zealand in recent times?

“It has been fun to watch, and my parents also give me updates,” she says. “To see those breakthrough times and records, especially from Zoe, has been amazing. We have such a good group of girls coming through.”

However, unlike much of that sprinting group who have chosen to remain in New Zealand after leaving high school, Leah decided in 2019 to take the next stage of her development living and training in the US after taking up a scholarship at West Texas A&M University.

Good friends with the Goodwin siblings – Christopher (jumper) and Kayla (jumper/hurdler) – who had also moved to the US on scholarships, she was enthused by the prospect of heading Stateside and after speaking to West Texas A&M head track and field coach Matt Stewart she immediately found the right fit.

“He was the coach I clicked with straight away,” she explains. “He was lovely, straight forward, I really liked him.”

Moving to the small country town of Canyon – similar to her upbringing in the Waikato – helped ease the transition, although the climate came as a shock to the former Te Awamutu College head girl.

“The heat is quite tough, and it has been 38C for the past week,” she explains to Athletics in Action. “During my conference meet in Kingsville in May it was 43C with 90 per cent humidity.”

Training has also differed from her time back in New Zealand. Focusing three times a week on weight training – far more often than what she was used to back home – and with less emphasis on longer track reps, the recipe has worked well. And her instincts proved correct with Coach Stewart, who has proved a rock of support throughout her time in Texas.

“He’s very understanding and he’s always there for the whole team,” she says. “He takes care of everyone and wants them to do well. He always puts his athletes first. I like his philosophy and he’s a typical west Texas guy in that he’s sweet and really supportive.”

From the outset Leah performed well in the US. In her first ever indoor season she performed well clocking a handy 7.56 for the 60m to win the conference title, and recorded a best 200m time of 24.46 running on the banked 200m oval.

This season Leah has gone from strength to strength. Believing she has matured as an athlete and taking her recovery more seriously than in the past she enjoyed a breakthrough indoor campaign. She made a huge improvement at the Lone Star Conference meet in Lubbock, Texas taking 0.10 from her 60m lifetime best in the heats to clock 7.46 before running 0.04 quicker to take victory in the final – the latter a New Zealand record. Then two weeks later at the NCAA Division II Indoor Championships in Pittsburg she twice bettered her New Zealand record – firstly with a 7.41 heat clocking backed up by a time 0.01 swifter for silver in the final.

“I wasn’t even too sure we had indoor records in New Zealand,” says Leah. “Although I did become aware that Zoe was set to run the World Indoor Championships the following week, so I knew she would break my national record. But, hey, I did my best and for a few weeks held the national record.”

The versatile sprinter, however, achieved even more in the 200m – striking NCAA Division II Indoor gold in a time of 23.93 on the oversized 300m indoor track in Pittsburg.

“I’d never run a 200m on a flat 300m track with no banking. The bends were quite tight, and I felt I couldn’t go full speed into the curve. It was quite a strategic race, so to win was quite a big accomplishment. I went into the meet ranked in the top ten but certainly not the top three. I think I to win medals in both events was a bit of a surprise.

Possessing good natural power, she has continued to thrive during the outdoor campaign lowering those PB’s 100m (11.48) and 200m (23.65). So, what next with the NCAA Indoor Division II Championships starting later this week in Allendale, Michigan?

“I try not to think about aims and expectation too much,” she says. “I am ranked nationally but all the top girls times are really close, so you just never know. The aim is to go for another PB.”

With still two years of eligibility remaining, Leah hopes to complete her degree before possibly studying her masters. But what are her long-term goals in the sport?

“I hope to continue to progress and work on a few technical elements such as my block starts,” she says. “I just want to continue to PR and see if I can win more titles and hopefully in the future one day represent New Zealand.”