Welcome to the Garden of Eden 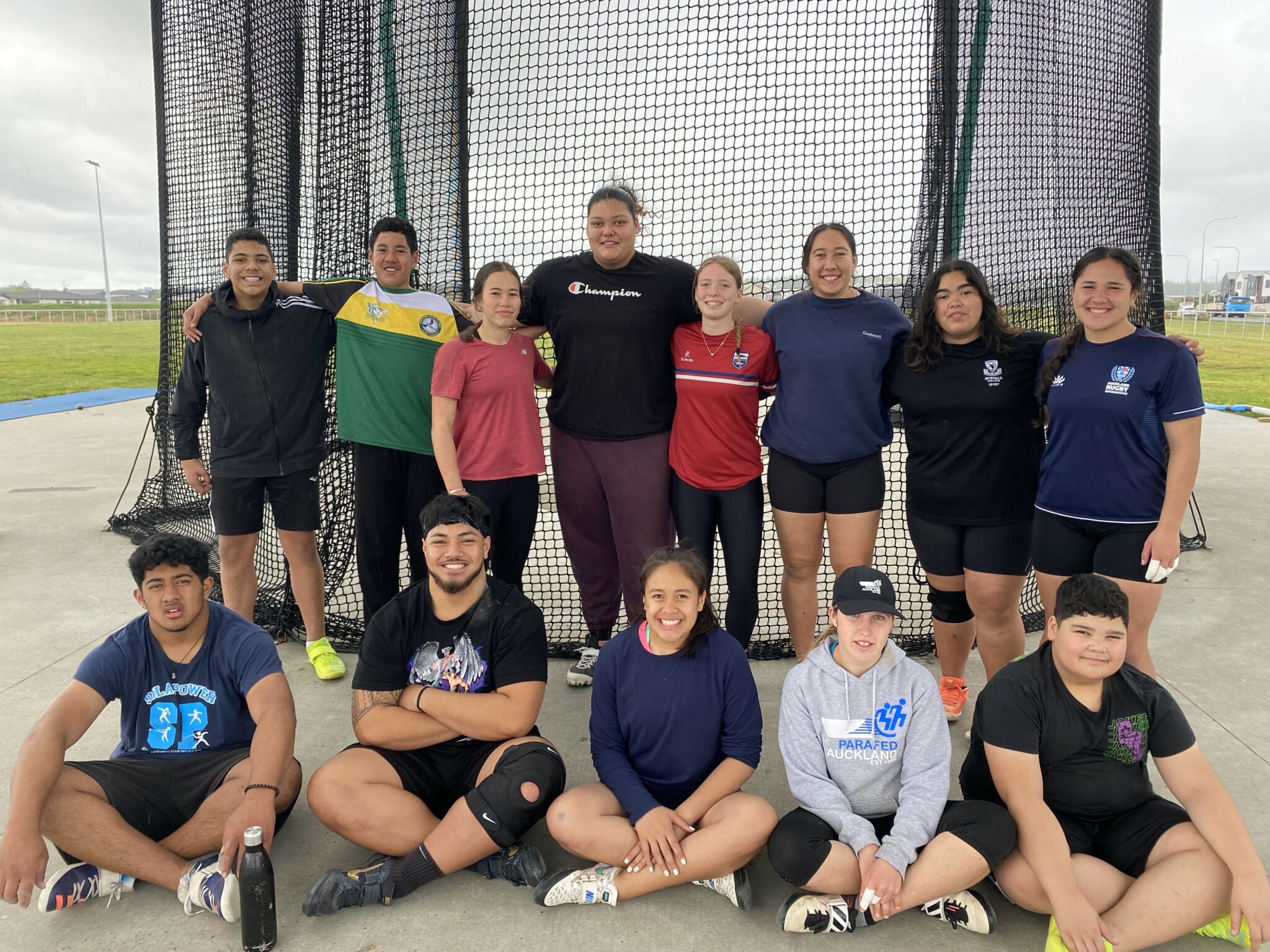 The throws squad at the Athletics NZ Home of Throws at Bruce Pulman Park have made huge progress over the past three years. (Credit: Natalia Rankin-Chi Tar)

It started as a modest paddock in South Auckland but over the past three years the Athletics NZ Home of Throws has developed into a prominent high performance hub and community facility giving athletes every chance to develop on their throwing journey.

Led by four-time Paralympic medallist John Eden, the centre, based out of Bruce Pulman Park in Takanini, has nurtured five athletes into the Athletics NZ Performance Development Squad, guided one athlete to the 2022 World U20 Championships in Cali, Colombia and was the base used by shot putter Ben Tuimaseve on his journey to the Tokyo Paralympic Games.

Waikato-raised John Eden had been working as Athletics Australia’s Lead Para Throws coach for eight years when he was contacted by Athletics NZ to be play a key role in the Home of Throws project. Based on the other side of the Tasman for 37 years, the attraction of coaching a broader group of athletes was too good to turn down for the five-time Paralympian who has also coached at a further five Paralympic Games.

“I wanted to move away from being a specialist Para coach because I viewed myself as a general throws coach,” says John. “I wanted to take that next step and work with able-bodied athletes as well as Para. I’m all about giving everyone a fair opportunity to train and compete.”

In 2019 a shot put circle, discus cage and containers housing equipment were erected at the facility, thanks to significant financial backing from the Grassroots Trust, although in the very early days of the project he admits he had no athletes to coach. Showing initiative, John reached out to local athletics clubs in South Auckland to identify talent. Two of the first athletes to train at the centre were a pair of young, teenage athletes – Liam Ngchok-Wulf and Natalia Rankin-Chi Tar – who have gone on to develop as the heartbeat of the squad.

Earlier this year, Natalia competed in shot and discus at the World U20 Championships in Cali while Liam is the reigning national U20 shot and hammer champion and Oceania U20 shot gold medallist.

“Both were of a reasonable standard when they first arrived, but needed to develop technically,” explains John. “That’s where the coach’s work comes in, although it make my life easier that both possess a very good work ethic.”

Over time, thanks to a combination of John’s efforts and word of mouth, the squad has grown to include around 30 athletes. The throwers are also not limited to South Auckland with athletes making the pilgrimage to Bruce Pulman Park from East and West Auckland as well as the North Shore.

Unless an ANZ-HP Programme athlete, all throwers pay a fee to use the facilities to either be coached by John or a pair of enthusiastic assistant coaches, whom he is mentoring.

But the general rule is the facility is open to anyone with a good attitude.

“If a kid or parent approaches me and asks ‘can I throw’? I never say no because if they can’t train here where else do they go,” he adds. “That person could be the next Dame Val (Adams) or Tom (Walsh). We like to show them an interest and a bit of love because you never know where throwing will take them.”

The culture of the training group is very important to the former Para world record holder hence the group are known as the PREP throwing club – which stands for Passion, Respect, Excellence and Pride.

“It is about being an athlete and respecting that position,” explains John. “Although it is important the athletes enjoy training. You want it to be fun and for them to come back because that is what will keep them in the sport.”

Competitive but fun pre-training handball matches help relax the throwers while music blares out during sessions to add to the atmosphere at the throwing hub.

Liam Ngchok-Wulf is among the leaders of the group, and fully acknowledges the pivotal role John has played in his personal development.

“This place is like a second home to me,” he explains. “But it is not the place, its strength is the people within it who have created a fun environment in which I can improve as an athlete.

“John has turned me into the person I am today, not only as a thrower but as a person in general. He is a great guy all round and whether it is gym or throwing he has taught me heaps. He is like a second dad to me.”

New Zealand U20 women’s shot and discus champion Natalia Rankin-Chi Tar shares many of Liam’s sentiments about the facility and the positive influence of John.

“The community we have set up here is pretty cool, we are all very close and it feels like family,” she adds. “John’s story is inspiring and the whole environment has pushed me to be the best that I can be.”

To help perhaps better understand the philosophy of the Home of Throws, it is important to understand the inspirational journey of the head coach. Raised on a dairy farm in the Waikato, John was a highly promising outside back in rugby and played several times for Waikato until shortly before his 20th birthday he crashed his motorbike into a power pole. Following the accident he spent nearly a year in hospital, his right leg was amputated and he went into a downward spiral.

“I had a chip on my shoulder and made many bad decisions,” he says.

His life, however, would be transformed after he met a Para surf lifesaver who was looking to recruit New Zealand athletes for the 1980 Paralympic Games in Arnhem, Holland.

“I saw a video of him doing surf lifesaving and I thought if he could do it, I could compete too,” recalls John.

Just 18 months later John won a silver medal in the high jump in Arnhem and two years later after competing at a top-quality meet in Australia for amputee athletes decided to base himself on the west side of the Tasman where he would remain until 2019.

John would go on to win three further Paralympic discus medals (silver in Seoul 1988, bronze in Barcelona 1992 and bronze in Atlanta 1996) before he concluded his career at the Sydney 2000 Games.

Yet his passion for athletics was such he wanted to stay involved in the sport and coaching seemed the natural path.

“I had been given an opportunity to do athletics and I just wanted to give back,” he explains of why he decided to move into coaching.

He later steered three Australian athletes to the Paralympic Games where his work ethic, passion and technical know-how is appreciated by all athletes he guides – although he jokes that he does need to work on his occasional “grumpy” demeanour.

“If they are mucking about, I can get moody with them,” he adds. “But they respond well to my coaching because I respect them and they respect me.”

The job over the past three-and-a-half years has not been easy for John. His wife, Linda, lives in Melbourne and for two years because of the Covid border restrictions the pair did not see one another during that entire time.

“Covid was hard, but Linda has been good about it,” he says. “We talk every day and we’ve made it work. I owe it to her to be back more often than I am, but Athletics New Zealand have been really understanding and allowed me to regularly head back home (since the borders have reopened).”

The sacrifices – or as John prefers to describe it ‘choices’ – have all been worth it. Nurturing a group of energetic and passionate throwers is a buzz and he is committed to seeing the completion of the second phase of the training facility, which will involve the building of an indoor facility and gym on the site at Bruce Pulman Park.

Yet whatever happens in the future, he hopes his athletes continue to move forward, show resilience and develop not only as athletes but better people.

“The best part of my job is seeing success,” he explains. “I get very emotional when I see my athletes succeed. I’m not the sort of person who let the athletes see the tears in my eyes but I’m feeling it and that’s why I love my job.”