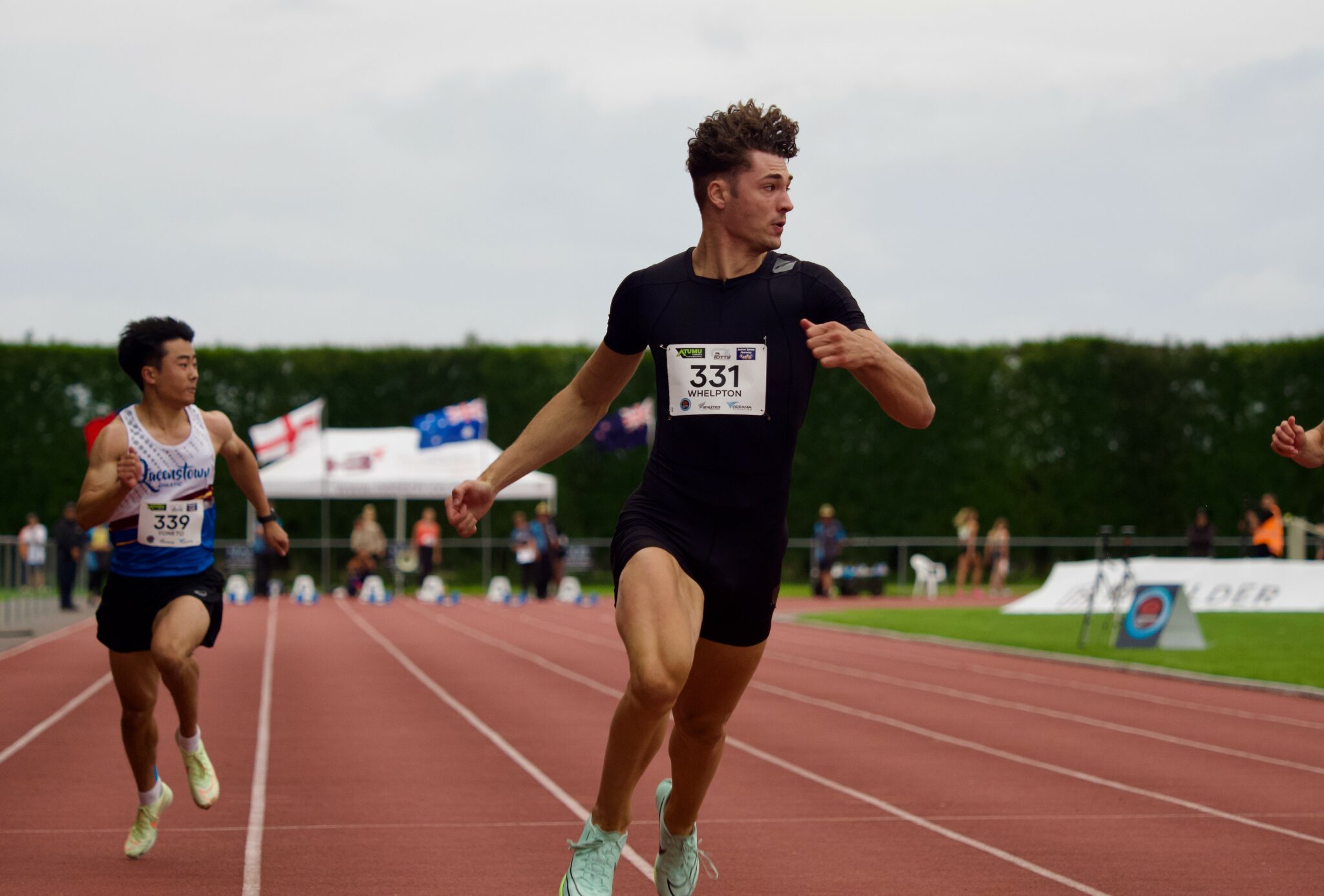 Sprinter Tiaan Whelpton ignited the track at Mitre 10 Park to twice equal his joint ownership of the New Zealand resident record for the men’s 100m at the Potts Classic in Hastings today, registering 10.18 in the heats before matching that mark in the final.

In a remarkable statistical quirk, Whelpton of the Christchurch Old Boys United also recorded 10.18 at this same meet 12 months ago to equal the New Zealand resident record of Joseph Millar set in 2017.

While there was a tinge of frustration that Whelpton did not claim the outright record today, the 22-year-old offered clear evidence in far from perfect conditions that one day he will claim the record outright.

Whelpton, who ran a wind-aided 10.14 mark at the Lovelock Classic in Timaru two weeks ago, powered out of the blocks to romp to an emphatic victory in his heat with that 10.18 time – also an equal PB – achieved with a slight tailwind of 0.4m/s.

In the final, he repeated the time to the one hundredth of a second this time with a 0.0m/s wind, finishing clear of Hamish Gill (10.57), a former national 100m silver and bronze medallist, with the veteran Millar in third in 10.79.

Whelpton said: “I’m super happy. The goal for me is to slip into the 10.1s more consistently and being able to do that in today’s conditions, which were more difficult than last year, I’m definitely happy with that.”

“I was excited after the final and I felt like I had got the record, but when I heard the time and that had equalled my PB and resident record again, I honestly couldn’t complain. It is where I want to be, and if I carry on in this form, and if you put me in a race with some heat and a good wind, I’m sure I’ll be running 10.0s really soon.”

“I was talking to my dad, and he said if I dipped across the line in the heat, I would have run a PB. I said, ‘no worries, I’ll dip in the final’, which I did, but I still got the same time.”

New Zealand 200m champion and 2022 World Championship representative Georgia Hulls revealed her sharpness over 100m by running down Livvy Wilson to triumph in a time of 11.69 (-0.8m/s) on her home track.

Hulls, who is coached by James Mortimer, was given a tough examination by Wilson her training partner, who led for the first half of the race and crossed the line 0.09 adrift in second. Brooke Somerfield (Athletics Tauranga) rounded out the top three, posting 11.95.

Hometown favourite Holly Manning mounted a successful defence of the feature race of the meet – the Sylvia Potts Memorial 800m – to battle to a hard-earned victory from Stella Pearless.

Manning staved off a late charge from the vastly improving Pearless to win by 0.50 in 2:05.52 with the second-place finisher rewarded with a PB by more than two seconds.

The fast-finishing Rosa Twyford, the former national U20 champion, grabbed third by 0.08 from Jenny Hauke, recording 2:08.28.

Paced through 400m by Shannon Geary down the back stretch on the bell lap Hauke, Pearless and Manning ran stride for stride three abreast in a captivating race. Manning moved ahead with 200m remaining and opened up a five-metre lead entering the home stretch with Pearless in pursuit.

As the finishing line approached, Manning started to falter and Pearless, who set her previous PB of 2:08.23 in Hamilton last weekend, started to close but the national champion would not be caught to snatch an impressive win.

James Preston repelled the challenge of Maltese athlete Jared Micallef to secure the men’s 800m victory in a meet record time of 1:48.05.

Josh Ledger paced the field through the first lap in 52 seconds before stepping off the track to allow the tall Preston to hit the front with the Micallef in close pursuit.

Nothing changed until the final 60m or so when Preston gradually pulled further clear of the Australian-born athlete to take the race win in 0.62. Behind, Karsen Vesty, the New Zealand Secondary Schools 1500m and 3000m champion of Hastings AC, set a PB of 1:51.24 for third.

Rosie Elliott executed a smart tactical display to clinch top spot in a fascinating women’s 400m to overhaul Portia Bing in the final straight and take victory in 53.43.

In an absorbing battle, Isabel Neal, the national silver medallist, made an aggressive start before Bing seized control of the race down the back straight and entered the final 100m with a two-metre lead from the chasing Elliott. But the Christchurch Old Boys athlete bided her time and unleashed a vicious kick finish down the home straight to take top spot from Bing (54.17), the New Zealand 400m hurdles record-holder.

In a tight battle for third World U20 Championship semi-finalist Mia Powell, 18, finished strongly to fill the final spot on the podium in 54.73 – 0.16 ahead of Neal.

Coming into the competition struggling with illness and competing off a shortened eight-stride run-up, 2016 Olympic bronze medallist Eliza McCartney claimed a confidence boosting victory in the women’s pole vault with a clearance of 4.36m.

The 26-year-old Auckland-based athlete surprised herself to defeat a below par Commonwealth Games bronze medallist Imogen Ayris (4.21m) and national champion Olivia McTaggart (who no-heighted at 4.36m) with a 15cm improvement on the height she cleared when third behind both Ayris and McTaggart at the Pre-Potts meet on Wednesday.

McCartney, who is feeling her way back into competition after a lengthy injury-enforced absence, required two attempts to clear at her opening height of 4.06m and wriggled over at 4.21 at the third time of asking. The 2018 Commonwealth silver medallist then revealed her battling qualities by sailing clear at 4.36m with her third attempt.

“I woke up sick this morning, which was unfortunate, so I wasn’t feeling 100 per cent, she explains. “It was a tough competition and that’s why I pulled the pin after clearing 4.36m but I’m really pleased with how it went.

“At the moment, the focus is to jump consistently in competition again, so I competed off a shorter run up because it takes a variable out and I can focus on jumping.

On the victory she said: “It is not something I was expecting, but I don’t usually ever expect or focus on winning, especially here in New Zealand when I train with these girls every week. We all have own goals, but the win was a nice cherry on top.”

Commonwealth shot put bronze medallist Maddi Wesche made a rock-solid start to her season, opening with a best of 18.58m to take victory in the women’s shot. The 23-year-old Aucklander, who boasts a PB of 19.50m, hurled the metal orb out to 18.21m in round one before adding a further 7cm on to that mark with her second round throw. A foul followed in round three before her best throw of the day was achieved in the fourth stanza – within 7cm of Dame Valerie Adams’ meet record. She climaxed the competition with an 18.49m throw in round six.

Competing in tricky conditions, Connor Bell could not quite match his New Zealand record-breaking feats in the men’s discus from three days earlier here at Mitre 10 Park but a best throw of 63.76m comfortably secured the victory. The 21-year-old Aucklander powered the 2kg discus out to a huge 66.14m on Wednesday at the Pre-Potts meet but today facing far from ideal conditions matching or even surpassing that achievement was a tall order.

The New Zealand champion, nonetheless, looked in great shape achieving his best throw in round five and two further throws of more than 60m. New Zealand U20 discus champion Max Abbot placed second with a PB of 47.96m.

Bell said of his performance: “I backed up pretty well after my national record on Wednesday. Everything was from behind in terms of the wind, so there was no real opportunity to catch a flight, so given this I was happy with how I threw. I’m really pleased to throw 63m today – the trip down to Hastings has been a successful one.”

Hannah Sandilands executed one of the breakout performances of the day in the field by leaping out to a massive new PB of 6.20m (2.0) to win a quality women’s long jump. The 26-year-old Christchurch Old Boys United, who came into the competition with a PB of 5.91m set in October last year, opened with a 5.95m leap before launching out to her competition-winning distance in round two. National champion Mariah Ririnui broke the sand at a best of 5.77m (1.2) to claim second spot.

Recent 400m convert Tommy Te Puni revealed his exciting ability over the one-lap distance to run a PB and meet record time of 47.23 with an exhilarating performance. The 20-year-old and former national U20 100m and 200m champion, registered a PB of 47.52 in Pakuranga in December but in far from ideal conditions in Hastings he impressed to record an emphatic victory – 1.26 seconds clear of Lex Revell-Lewis in second.

Boh Ritchie (New Zealand Secondary Schools) began her 2023 campaign in the same vein as much of her 2022 campaign by taking the New Zealand women’s U20 3000m title in a huge PB of 9:45.49. Ritchie, 15, the national U20 road and cross country champion, did not panic when Hannah Prosser accelerated in mid-race to break clear of the opposition.

Opting to run a stride behind Prosser, Ritchie made her decisive move with 300m remaining to kick clear and bank another national title. Prosser of Aspiring Athletics was rewarded with a silver medal in 9:49.22. Mackenzie Morgan (North Harbour) set a massive PB for bronze in 9:59.61.

The national U18 3000m champion and men’s U18 New Zealand record-holder for the distance ran a blistering first kilometre of 2:42 and rapidly put a clear gap between himself and the rest of the field. De Vaal, representing New Zealand Secondary Schools, was unstoppable clocking 8:10.80 – just 0.08 shy of his personal best.

Behind, Alfie Steedman, 15, the New Zealand Secondary Schools junior boys 1500m and 3000m champion shattered his PB to claim silver in 8:19.74 while Elliott Pugh (Athletics Tauranga) was also rewarded with a PB for bronze in 8:22.85.

Anthony Nobilo (North Harbour Bays) reaffirmed his current rich vein of form by exceeding his meet record distance with all six throws to take out the men’s hammer with an impressive 67.50m. The four-time national champion produced three throws beyond 67m and his performance was the fourth best of his career, just short of his PB of 68.95m set in Pakuranga last weekend.

The overseas athletes dominated the women’s discus with Great Britain’s Jade Lally, the Commonwealth silver medallist, winning with a meet record of 60.91m from Australian Taryn Gollshewsky of Australia (59.07m). New Zealand national bronze medallist Tatiana Kaumoana was the pick of the Kiwis in third (53.97m).

Shay Veitch (Ariki) was the class of the field in the men’s long jump, putting together a consistent series highlighted by a best of 7.49m (0.1). He finished 53cm clear of second placed Aaron Booth (Waitakere), the national decathlon champion.

Oceania record-holder Lauren Bruce opened her campaign with a solid best of 66.54m to take out the women’s hammer. Lexi Maples (Christchurch Old Boys) added more than half-a-metre to her PB with a 57.38m effort to take second.

James Steyn edged a tight men’s pole vault competition from old rival Nick Southgate as the Auckland-based duo both cleared 5.02m. Steyn, the two-time national champion, was awarded top spot virtue of a second time clearance at that height with Southgate settling for second as he required three attempts.

Nick Palmer (Hastings), who set a lifetime best of 19.16m at the Pre-Potts meet just three days ago here in Hastings, triumphed in the men’s shot with a best of 18.74m.