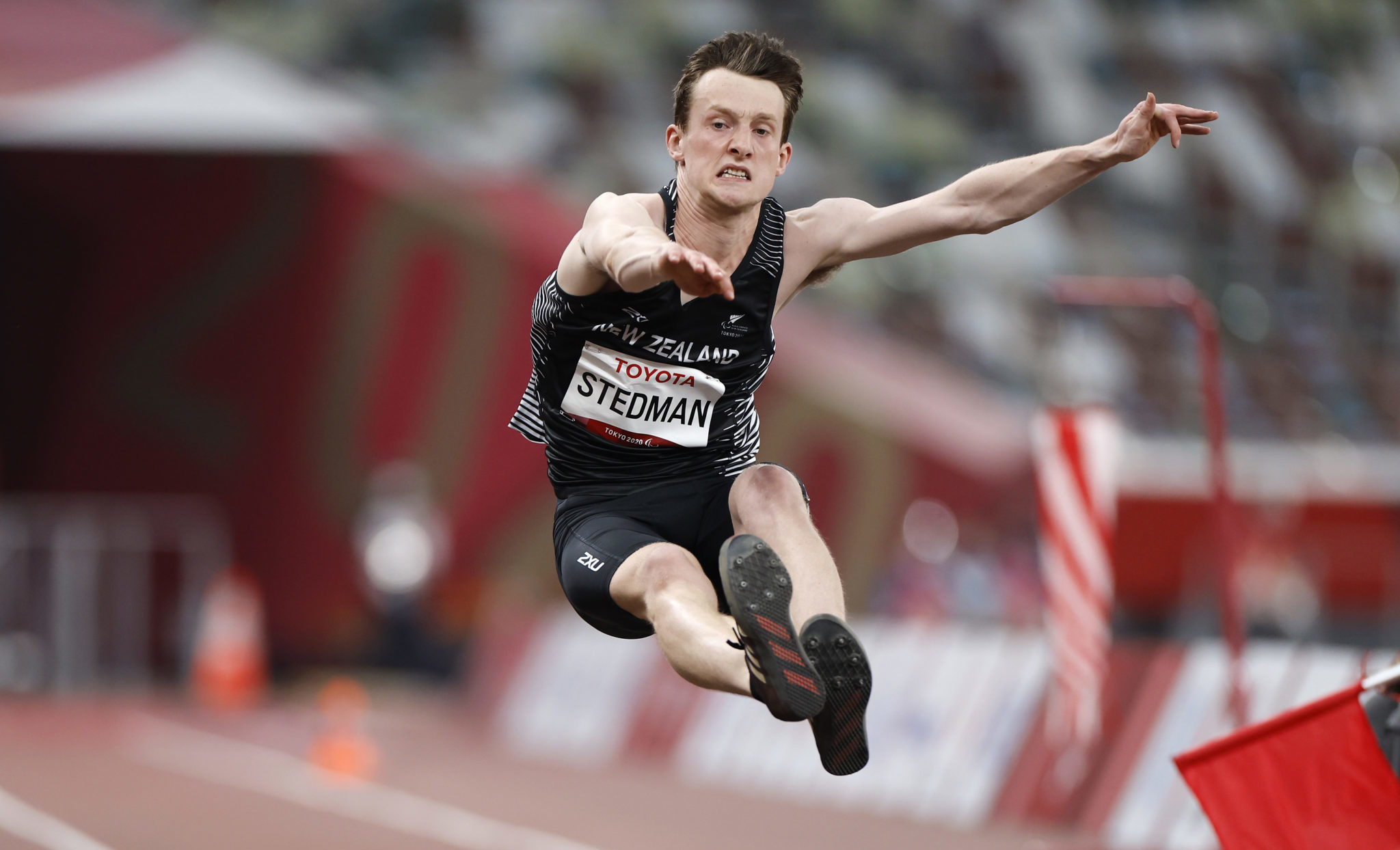 Will Stedman leaps out to long jump silver at the Tokyo 2020 Paralympic Games (Photo: Getty Images)

Will Stedman provided an exhilarating climax to the men’s long jump T36 at the Tokyo 2020 Paralympic Games as a magnificent sixth round leap of 5.64m (+0.1) catapulted the Kiwi from sixth to earn a stunning silver medal.

For the versatile Cantabrian the success inside a steamy Tokyo Stadium represented a third Paralympic medal of his career after he claimed bronze medals in the 400m and 800m T36 at the Rio 2016 Games.

Will, who competes in the final of his primary event the men’s 400m T36 final later today (Tuesday), opened the competition with a foul before producing a solid 5.44m (-0.2m) in round two to advance to fifth overall – just 14cm shy of the gold medal position.

However, the Christchurch-based athlete showed his medal potential with his penultimate jump – soaring out to a distance which looked to put him in podium contention only to be awarded a narrow foul.

Lying in sixth place ahead his final attempt, Will maintained his composure magnificently to sail out to an Oceania record of 5.64m (+0.1) with his final effort.

Initially unsure of the distance, when the scoreboard confirmed he had moved into silver he put his head on his hands and let out a giant smile.

The Ukrainian Roman Pavlyk, who had been relegated to fourth by the Port Hills AC athlete, bounced back with a 5.63m effort in the final round to move into bronze, within 1cm of Will. However, the Kiwi, who finished fifth in this event at the Rio 2016 Paralympic Games, held firm to secure silver.

Gold was secured by world champion and world record-holder Evgenii Torsunov of the Russian Paralympic Committee courtesy of a Paralympic record of 5.76m in round four.

Will, who is one of the two New Zealand Paralympic team leaders alongside swimmer Sophie Pascoe, said: “I am a bit overwhelmed, it was a rollercoaster of a competition and I still don’t think it has quite sunk in yet. It was a real mental battle in the last three rounds because I was jumping 30cm off my PB and it is not going well. I just gave that last jump everything.

“I thought it (the silver medal winning leap) was a bad jump. I was like oh, man that’s it. Then I saw the 5.64m come up on the screen it was like woah. I’m feeling really elated but it hasn’t sunk in yet.

“I’ve had a stress fracture the past few months, so I’ve had to modify training a bit. I’m really happy with this and a big shout out to George (Edwards) and Simeon (Joplin) my two coaches who have kept me in shape to medal here.”

On how tonight’s silver medal sets him up for the men’s 400m T36 final at 2.20pm later today, he said: “I think it is good. I did well (in the long jump) and I’m really happy that I did, but there is still a hunger there. I want to run fast, so let’s focus on getting back, getting some food and some sleep and coming back here tomorrow. I’m excited.”

Will’s silver is New Zealand’s third athletics medal of the Tokyo Paralympic Games to add to the gold medal pocketed by Lisa Adams in the women’s shot put F37 on Saturday and the silver medal scooped by Danielle Aitchison in the women’s 200m T36 on Sunday.

The other Kiwi in Para athletics action on Tuesday (today) is Auckland-based sprinter Anna Steven, who makes her Paralympic debut in the second heat of the women’s 200m T64 at 1.06pm. The 20-year-old is chasing a spot in the final which takes place later on Tuesday at 10:52pm.