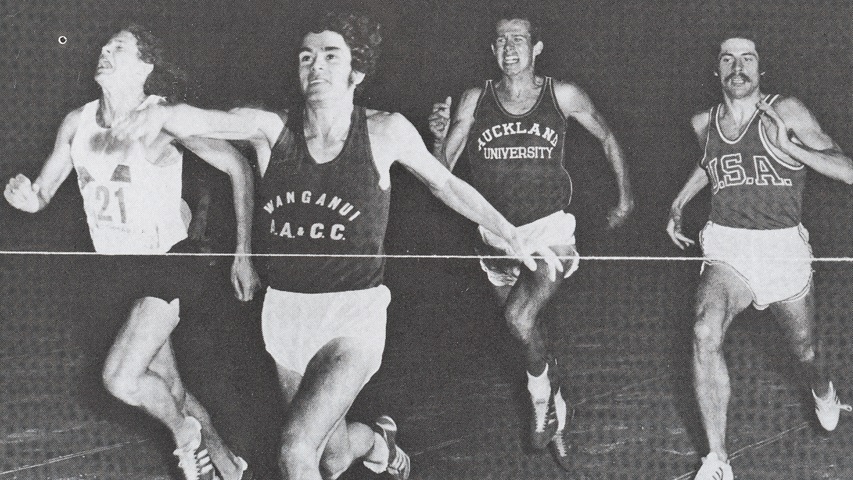 He joined the Wanganui Athletic Club as a 15 year old, just out of Wanganui Technical College and during his first season concentrated on sprinting. He recently recalled that he did practically nothing as a sprinter and acted as pacemaker for a group of 20 athletes. His elder bother Alan suggested that he sought Toby Bowyer as a coach. Under Bowyer’s astute guidance he quickly graduated to quarter mile events and then to the half mile and later to gain more competition the mile and the 1500m.

Ross won the feature event the mile at the official opening of the new Porritt Stadium in Hamilton on 12 December 1970 in 4:00.9.

He went close to breaking four minutes for the mile at Lower Hutt in January 1972 and in February that year he teamed up with Tony Polhill, Richard Tayler and Dick Quax as a New Zealand team to set a world 4 x 1 mile relay record of 16:04.8 at Mt Smart Stadium Auckland.

A notable victory by Ross was at an International meeting at Mt Smart Stadium on 22 February 1972 (photo above) where he won the 800m in 1:49.7 beating John Walker and Tony Polhill who both recorded 1:50.0 and American Jere Van Dyk.

He represented New Zealand at the 1968 Australian championships finishing third in the 800m and at the 1969 Pacific Conference Games in Tokyo where he was fifth in the 800m.

Ross carried on in the sport as a successful and experienced coach, in Whanganui and Wellington, from 800m to the marathon including cross country, road and mountain running.