Adams storms back to vintage best 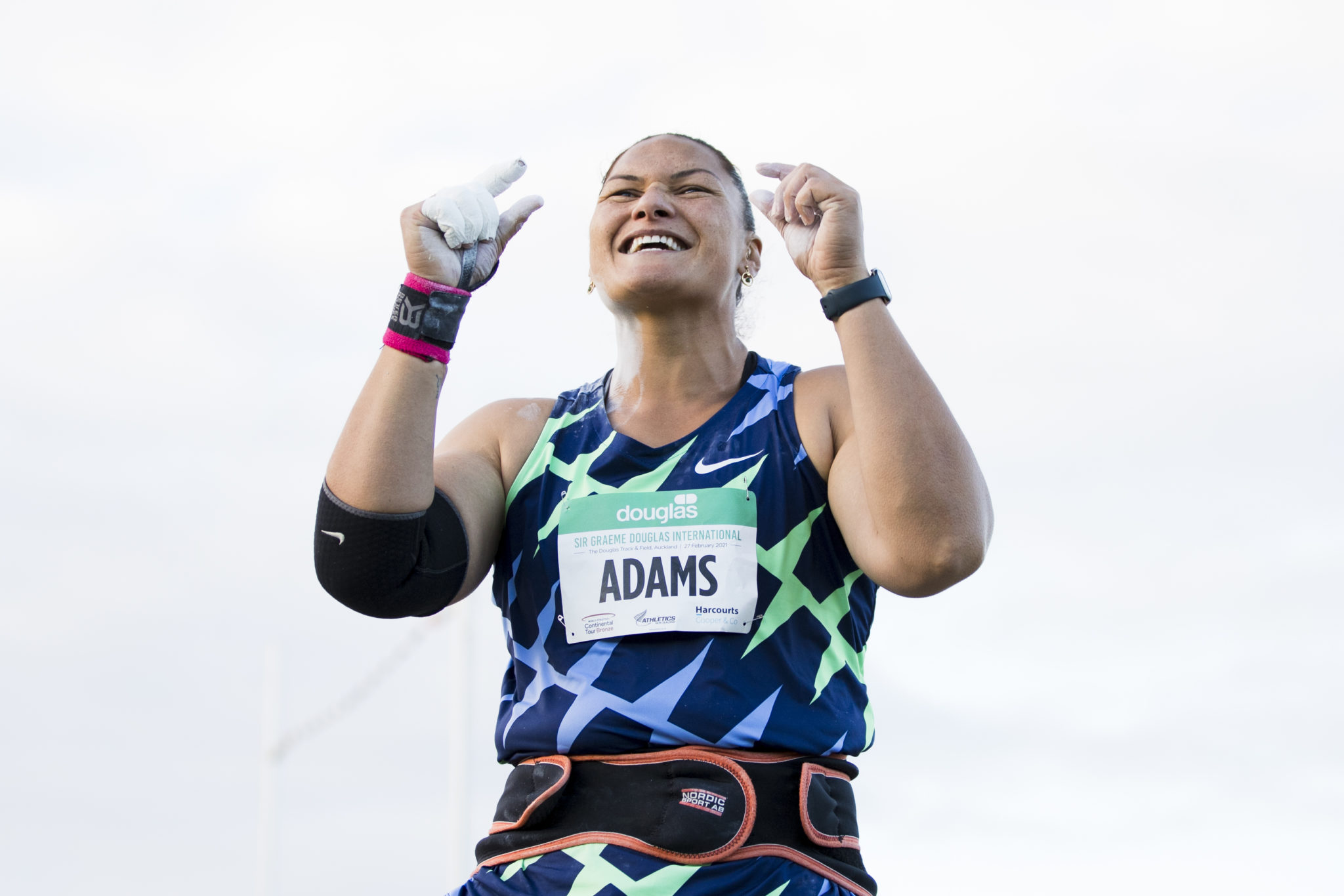 Dame Valerie Adams surged back to her vintage best this evening as she lit up the Sir Graeme Douglas International in Auckland by unleashing a world-class 19.65m to register her longest throw for five years.

In a brilliant return to form, Adams added almost one metre on to her season’s best and four times surpassed the 19m mark with her best effort matching the world indoor lead of Portugal’s Auriol Dongmo.

Adams has shown small incremental improvements in her three previous competitions this year but today she took a giant leap forward.

In the zone, Adams then powered the shot out to 19.31m in round three. Showing hugely impressive consistency, she registered 19.14m with her penultimate effort before concluding an outstanding night’s work with a 19.36m throw.

“The smile is not going to go away any time soon. Taking the time to move down to train in Christchurch has all paid off. Today was a great day,” she added.

“It was a post-two babies PB. To be able to do that and back it up with consistent throwing is massive. Hopefully, this will inspire mums that they can perform in sport after having kids.”

Behind, the 2018 world U-20 champion Maddison Wesche also impressed to hurl the shot out to a season’s best effort of 18.12m – 20cm short of her PB set at this event two years ago.

Third spot was banked by Kaia Tupu-South as the 18-year-old from Takapuna Harriers set a PB of 15.79m.

Tom Walsh roared back to form to snap a four-competition losing streak against rival Jacko Gill to triumph with a season’s best effort of 21.60m.

The shot put clashes between the heavyweight pair have provided the primary narratives of the 2020/21 track and field season with Gill’s outstanding form catching the eye.

But today at the Trusts Arena, Walsh hit back to return to the domestic summit.

The three-time world champion (one outdoor, two indoor) was first to strike, taking a first-round lead with a best of 20.90m, only for Gill to unleash the perfect counter-punch with a 21.05m throw in round two.

Walsh improved his best but not his overall position with a 20.95m effort in round three, only for the real fireworks to arrive in the penultimate stanza.

The Christchurch-based athlete looked visibly relieved as he powered the 7.26kg implement to 21.60m to take the lead and add 14cm on to his season’s best. Gill responded well with a best of the night 21.44m effort, but on this occasion Walsh was to prevail.

Nick Palmer clad 50cm on to his lifetime best as the 20-year-old thrower hurled the shot out to 18.41m in round five.

Another shot putter in impressive form was Ben Tuimaseve, who for a third successive week bettered his national F37 record. The red-hot Para-athlete produced a top-quality series, highlighted by a 12.91m effort in round three to add 13cm on to his previous best.

“It felt okay,” Walsh said of his fifth round throw. “It was much better than the first few rounds, although it blew through my fingers, it hurt like hell. But it was a nice feeling to get something behind it because the first three rounds were no good.”

On the outstanding performance of his training partner, Dame Valerie Adams, he said: “I had an insight into information that she was worth 19m-plus tonight. It was her furthest throw in five years and she’ll be over the moon with that. She’ll be a handful to deal with in training on Monday.”

Hamish Kerr could not quite repeat his pyrotechnics of last weekend in Wellington but once again served notice of his abundant gifts with one tantalisingly close effort at a new national record and automatic Olympic qualification mark of 2.33m.

Seven days ago, the 24-year-old Christchurch Old Boys athlete had taken sole ownership of the New Zealand record with a 2.31m leap and tonight he again looked in the mood to produce something special with a first-time clearance at 2.28m.

A very promising first attempt at 2.33m raised real optimism another national record could be on the cards, but unfortunately tonight that was not to be and he had to be satisfied with the victory.

“The competition up to 2.28m hadn’t gone amazingly. I’d had a couple of rusty clearances but nailed it at 2.28m. I then thought, just get it up to 2.33m. And with my first attempt I had a really good look at it.”

There was high drama in the men’s 100m as Tiaan Whelpton dramatically pulled up around the 70m mark with a leg injury when leading, allowing Eddie Osei-Nketia to take victory in 10.46 (+3.2m/s).

In what was one of the most eagerly awaited clashes of the night, Whelpton got away to his trademark blistering start and opened up a clear lead on the field.

However, Osei-Nketia started to gradually claw back Whelpton’s advantage only for Whelpton’s race to quickly unravel after feeling pain in his hamstring.

A shocked Osei-Nketia then appeared to slow up in the final metres but still claimed a comfortable win from training partner Joseph Millar (10.69) with teenager Tommy Te Puni just 0.01 further back in third.

Zoe Hobbs further cemented her status as New Zealand’s fastest woman to take out another 100m victory in a rock solid 11.45 (+0.3m/s).

The 23-year-old Aucklander recovered from a little stumble early in the race to blitz the field and claim a decisive win from her training partner Georgia Hulls, who lowered her PB by 0.04 in 11.64 for second. Brooke Somerfield approached her lifetime best, recording 11.84 to secure third.

Earlier in the heats, Hobbs powered to a time of 11.36 – within 0.01 of her New Zealand resident record set in January – but the time had a wind reading of  (+2.5m/s), so for record purposes would not have stood.

New Zealand’s premier female endurance athlete Camille Buscomb once again proved the top of the domestic pile with a top-quality display in the 1500m.

The national mile champion could not quite replicate her PB heroics over the metric mile on her home track of Hamilton two weeks ago but proved too strong for the rest, stopping the clock in 4:15.25 with a 64-second final lap.

The 2019 national 1500m champion Katherine Camp finished strongly to clinch second in a season’s best 4:17.85 by 0.09 ahead of Rebekah Greene in third but once again Buscomb reigned supreme.

Hamish Gill’s stunning conversion into the world of one-lap running took another step forward as he claimed yet another men’s 400m victory, courtesy of a PB of 47.68.

The 23-year-old Aucklander, who had previously specialised as a 100m and 200m sprinter, only made his 400m debut two weeks ago in Hamilton but completed a third successive victory, chipping 0.04 from his lifetime best set at Porritt Classic two weeks ago.

Cameron French, who earlier in the meet triumphed in his specialist 400m hurdles in a time of 50.96, grabbed second with a solid 48.75 – 0.18 clear of reigning New Zealand 400m champion Luke Mercieca.

The domestic sprint hurdles scene has been dominated by Amy Robertson (women’s 100m hurdles) and Josh Hawkins (men’s 110m hurdles) so far this season but, while the former maintained her sequence of success, the latter had a night to forget at the Trusts Arena.

Robertson matched her personal best time of 13.58 (+0.8m/s), set just one week ago at the Capital Classic in Wellington, to take race one. But Hawkins suffered the misfortune of disqualification after false starting, allowing Tom Moloney to take out the race win by shaving 0.12 from his lifetime best in 15.25m (+0.5m/s).

Two weeks ago in Hamilton, the pair served up a dazzling two-lap battle with Preston edging Beddoes by just 0.01. Tonight paced through 800m in a little under 54 seconds by James Harding, Preston established control of the race and today Beddoes could not get within striking distance as the Wellington Scottish athlete stopped the clock in 1:47.92. Dominic Devlin rounded out the top three in a time of 1:50.47.

A perfectly timed finish by the in-form Sophie Atkinson earned the 19-year-old a confidence-boosting victory in the women’s 800m.

Stella Pearless led the field through 400m in 65 seconds and entering the home straight it was Pearless and Krystie Solomon who looked in prime position in the fight for victory.

Tori Peeters was a clear winner of the women’s javelin, firing the spear out to a solid 54.47m.

Anna Steven set a blistering 200m time of 28.95 to claim an eye-catching victory in the women’s 200m para event. However, unfortunately for Steven, the wind speed of +2.3m/s was just above the allowable limit to be classified as a PB, which remains the 30.33 time she posted when seventh in the T64 200m final at the 2019 World Para Athletics Championships.