Best moments from the Daikin Night of 5s 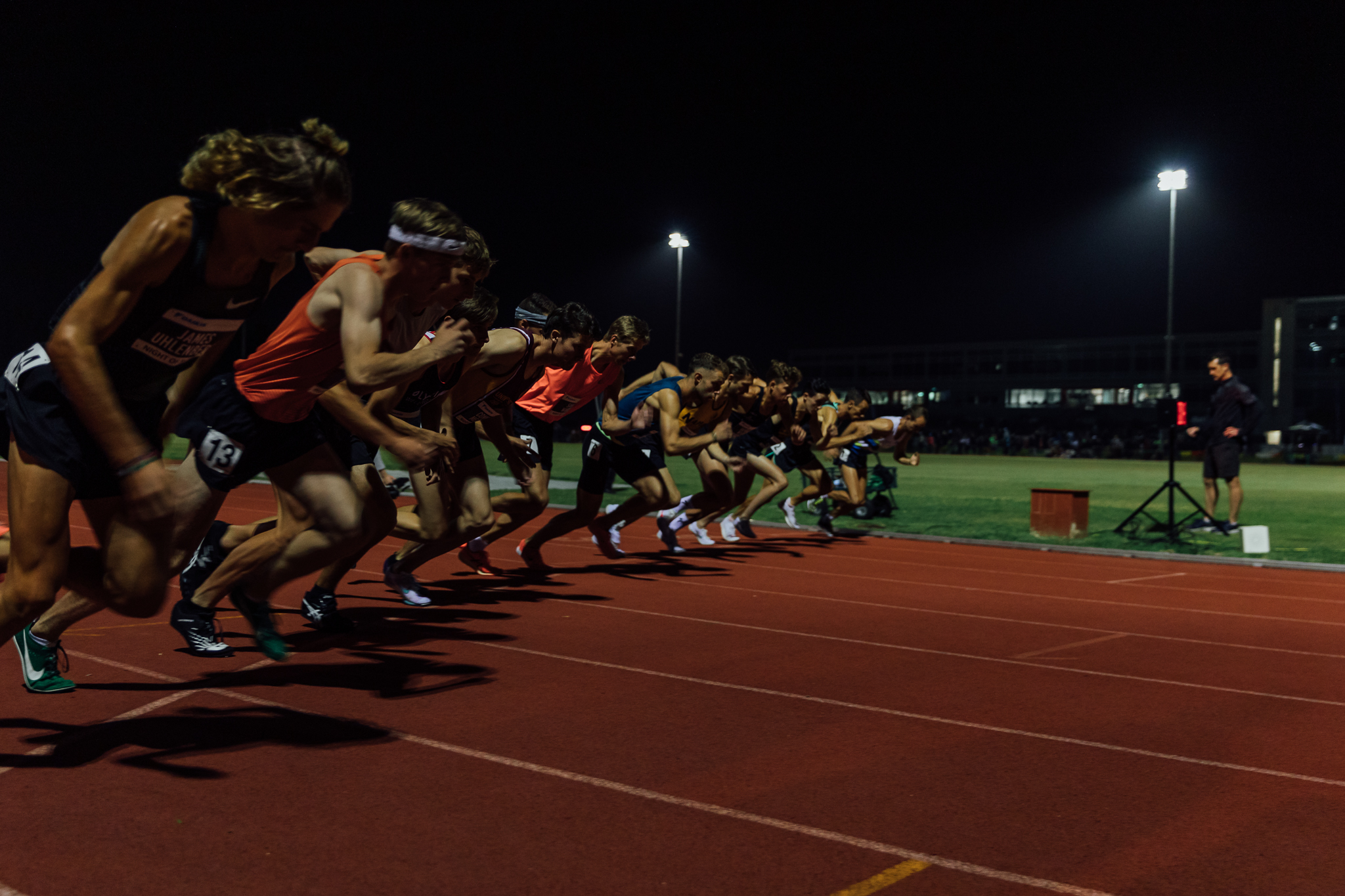 The Daikin Night of 5s gave an early indication of what is to come in an action-packed summer season by producing some outstanding performances at AUT Millennium Stadium in Auckland on Friday.

Here are some of the most memorable moments.

Eric Speakman provided the perfect finale to a stunning night of action by shattering the race record to clinch the Blincoe Cup in a hugely impressive 13:31.84.

In a race rich in depth, the Napier Harrier unleashed a stunning 56-second last lap to accelerate clear of the main challengers to butcher his previous 5000m personal best by more than 24 seconds.

The race had been set at a blistering pace with Sam Tanner hitting the 3km checkpoint in 8:01, followed by national 5000m champion Hayden Wilde. Speakman was in the next group paced by Ben Moynihan some five seconds adrift.

Wilde started to suffer for the fast early pace and the four-strong pursuing pack caught and passed the international triathlete with 700m to go.

At the bell, Speakman launched his attack and he proved unstoppable.

After suffering three fractures in an injury-ravaged 2019, Eric was delighted to have remained healthy in 2020 and the benefits of consistent training reaped their rewards at AUT Millennium.

The 30-year-old Wellington-based schoolteacher said: “I was really excited to hear that a pace of between 13:30-13:40 would be set because I thought on a good night that should be achievable.

“My race was to sit in and if I got to 400m to go still in contention, I have a shot. I just had one of those races that if you are lucky happen once or twice a year and tonight that happened to me.

“To be honest, I was just the benefactor of everyone’s hard work – I just got to finish it off.”

Camille and Lydia lead the way

New Zealand’s pre-eminent female distance runner Camille Buscomb gave yet another demonstration of her endurance excellence by recording 15:28.24 over 5000m.

Running in the men’s B race, the 30-year-old 2019 World Championship 5000m and 10,000m finalist made the most of the opportunity, posting her quickest 5000m time in New Zealand and the sixth-fastest of her career for the 12-and-a-half-lap distance.

O’Donnell was rewarded for an aggressive piece of long-distance running by crossing the line in a slick 15:55.33 to record the second-fastest 5000m time of her career.

Greene secured second by obliterating her personal best by more than 19 seconds, crossing the line in 16:04.15.

O’Donnell was satisfied with her efforts.

“It’s my first track race in 10 months and I had no idea what I was going to run so I’m pretty happy with the result,” she said.

“It wasn’t quite what I wanted but it was good. It’s good to be here, it’s an amazing event and we’re so lucky to have something like this put on, especially in 2020.”

O’Donnell won’t be racing on the track for the rest of the season.

“My next stage of training is a marathon block in Australia starting next month and I’m then coming back to race the Christchurch marathon in April.”

Jacko Gill claimed a first win against Tom Walsh for nine years as the local Takapuna athlete clinched a memorable victory in the men’s shot put.

It was at the same North Shore venue in December 2011 when Jacko, a former two-time world U-20 champion, last defeated his Kiwi shot rival.

But this time it was the Aucklander who prevailed with a dominant display. He led from his first-round effort of 20.74m and his best of the night was a 21.05m hurl in round two.

Walsh, who has been in a heavy phase of training, perhaps understandably did not find his very best form, but he gradually improved and hurled the shot out to a best of 20.14m in round five.

Gill, who is coached by Mike Schofield and is coming off a heavy phase of training two weeks ago, said: “It is definitely nice to get the win and it was a good start to the season. I was hoping for a little more in terms of distance but we are all in different training phases at the moment, so it’s a little tricky to work out who is where.”

Despite suffering a first defeat in nine years to his Kiwi rival, Walsh, the 2019 world bronze medallist, said: “I was not too unhappy, which might be surprising to some with the distance I threw. I’m not trying to make any excuses but I’m in a heavy phase of training. A 20m throw for me at the moment is actually outstanding. I’m not the type of thrower who can lift heavy and throw far. But credit to Jacko, he was outstanding and throwing 21m is very good. It is good to see another New Zealander throwing really well.”

The women’s hammer was always expected to serve up one of the juiciest head-to-head encounters of the meet and the clash between recently-minted Oceania record-holder Lauren Bruce and Commonwealth champion Julia Ratcliffe did not disappoint.

In their first competition together since Lauren powered the hammer out to a 73.47m effort at the Spring Series in Hastings in September, it was Ratcliffe who prevailed with a best of 71.02m in round six – one of four throws she unleashed beyond the 70m mark.

Ratcliffe seized control from her first-round effort of 70.34m and never relinquished her advantage. In round two, she went out to 70.77m and, while Bruce responded with an excellent 70.42m later in the round, this was to be her best of the day. Struggling to discover her best rhythm, 23-year-old Cantabrian Bruce produced one mighty hurl of around 72m which finished just outside the sector to suggest there is nothing wrong with her current shape.

Hamilton-based Ratcliffe, who fell short of the Olympic qualification mark of 72.50m, said she had no lack of motivation following Bruce’s outstanding season and said:

“Ever since Lauren set those big throws, it was a real kick up the bum for me. It has made training so much more meaningful than having to kick my own butt!

“I’m actually a little bit disappointed with today because I felt I had more in me. But it is my first competition since March, so to be able to come out and throw consistently is pretty good.”

Hamish Kerr gave a tantalising hint as to his potentially exciting season ahead by winning the men’s high jump with a clearance of 2.27m – the second-best height of his upwardly mobile career.

Not content with that, the 24-year-old made one unsuccessful effort at the national record of 2.31m before opting to raise the bar to an Olympic qualification mark of 2.33m, where he made two decent cracks at the height.

Kerr, who is the joint New Zealand record-holder with a best of 2.30m, was pleased with his efforts in Auckland, which suggested he could be set for so much more as the season progresses.

“I wanted to put a full stop on what has been a weird year and I felt I did that,” he said. “I initially went for the New Zealand record of 2.31m but, because I started to feel tired, I thought I might as well go up to the Olympic qualification mark.

“My training has gone really well but high jump is such a mental event and you have to be able to trust in your rhythm and routine which I did tonight.”

Zoe on song in season opener

New Zealand’s fastest woman Zoe Hobbs opened her season in blistering form with an 11.48 clocking to win the women’s 100m.

The 23-year-old national 100m and 200m champion was a class apart in a quality domestic field, making a rapid start out of the blocks before stamping her authority on the field in the second half of the race.

With her main goal the Olympic qualification marks of 11.15 for the 100m and 22.80 for the 200m, her debut appearance was a good opportunity to blow the cobwebs away in the expectation of performing better later in the season.

“I’m coming off a big heavy training cycle, it’s been a pretty full-on winter, so I’m stoked to get my first race underway,” she said. “The first half felt a little bit heavy but the last half felt a bit better.”

The 19-year-old national 100m champion, who last week also captured the national secondary schools senior boys 100m title, was far from at his fluent best but showed a champion’s instincts to find a way to win, stopping the clock in 10.49 – 0.09 clear of Millar who was awarded second in a photo-finish from Hamish Gill.

“I had a wobble around 30 metres,” Eddie explained. “I thought I was going to fall over and do a roly-poly. But I just then focused on the race and I’m quite proud of the way I held myself together to win and defeat Joseph.

“I love training with Joseph, he calls me out on a couple of things, but he is great to train with and I hope to improve from there.”