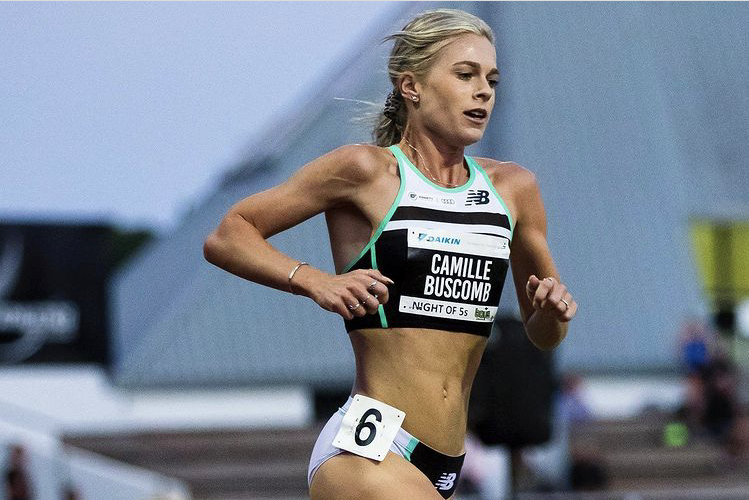 Few athletics venues in the world are as synonymous with the mile as Cooks Gardens in Whanganui, and Camille Buscomb and Sam Tanner lived up to that rich tradition by claiming the New Zealand Mile Championship titles on a historic night of action at the Cooks Classic.

After a 52-year absence, both national mile crowns were re-introduced with the men’s race following the script as the gifted 20-year-old Tanner added the national title over the ‘classic distance’ to the New Zealand 3000m crown he snared last weekend in Hastings.

Producing a performance the great, late Sir Peter Snell – who smashed the world mile record here at Cooks Gardens some 59 years ago – would have been proud of, Tanner destroyed the field with a scintillating burst of speed to carve almost three-and-a-half seconds from his PB and clock 3:54.97.

It was a performance which lifted the youngster to eighth on the all-time New Zealand lists for the distance – ahead of former Olympic medallists Sir Murray Halberg, John Davies and Dick Quax – and inside the top ten mile performances ever seen at this historic venue.

Tanner was happy to track James Preston, who acted as the rabbit for the first half of the race, before taking control with two laps to go, followed by Eric Speakman with George Beamish.

Down the back straight of the final lap, Tanner visibly quickened his stride and gradually opened up a clear gap on the pursuing Speakman.

Entering the home straight, the red hot Tauranga athlete kicked again to record his third PB of his dazzling January (he has also posted PB’s for the 1500m and 3000m).

In a repeat of the podium finish from last weekend’s New Zealand 3000m Championship battle, Speakman grabbed silver, recording a personal best of 3:56.66, with Beamish in bronze (3:59.13). Oli Chignell also produced a terrific performance, wiping more than 19 seconds from his previous best to also dip below the historic four-minute barrier to claim fourth in 3:59.77.

“It is such an honour to win the New Zealand mile title, I had been looking forward to it and I’m really proud of how I performed – I can’t complain with a 3:54 mile,” an elated Tanner said post-race.

“I’m so stoked and blessed to be in the country for what was my last race before I fly back out to the US tomorrow,” added Tanner, who will now return to Seattle to attend the University of Washington.

“James Preston took it out to go hard and we really appreciated that. I was hoping he might have taken it to 1200m but he dropped off at 900m. At that point I thought, ‘Oh, man, I’ve got a long way to go’. I then felt it out and slowly picked up the pace. I closed it out in the last 200m. It felt really good.”

Buscomb was a similarly decisive winner in the women’s mile, using her renowned strength to forge clear of New Zealand 3000m champion Kara Macdermid in the final 200m to clinch her 11th national title.

Seizing control of the race from around 600m, Buscomb – the 2019 World Championship 5000m and 10,000m finalist – was tracked by the in-form Macdermid but always looked in control.

Buscomb gently squeezed on the gas on the final lap to pull clear over the final 200m and stop the clock in 4:38.78, a little over one second outside of her lifetime best.

“It’s cool to be the New Zealand mile champion,” said Buscomb in the wake of her title.

“We’ve really tried to change up the season this year, I did an 800m last weekend and next weekend in Christchurch I’ll do another 800m,” she added.

“I led from 600m, but it was windy and the pace in the early stages was not so fast. I knew it would be hard to salvage a quick time, so I focused on keeping the pace honest to win the race.

“I was really pleased to open up a bit of a gap in that last 200m, which was enough to win the title.”

In the field, Jacko Gill once again claimed the scalp of three-time world champion Tom Walsh to back up the surprising defeat of his fierce shot put rival at the pre-Christmas Night of 5s meet.

Gill, who recorded a longest ever throw in New Zealand last week with a 21.33m effort in Auckland, once again demonstrated his exciting current form by firing the metal orb to a stadium record 21.11m in round two.

Walsh, who triumphed last week in Hastings in the absence of Gill, struggled to find his usual rhythm with his best effort of 20.78m also coming in the second round.

Likewise starring in the shot circle was Para world champion Lisa Adams, who came within just 1cm of her F37 world record, set in Hastings last September, with another stellar display.

The 30-year-old Lake City AC athlete hurled the 3kg ball to a mighty best of 15.49m in round two and backed this up with 15.17m in her next effort to once more illustrate her outrageous throwing gifts.

Crowd pleaser Hamish Kerr once again delivered to better his own stadium record as he successfully negotiated 2.27m at the third time of asking to take out the men’s high jump.

The joint New Zealand record-holder with a best of 2.30m then raised the bar to 2.31m but was unsuccessful in his bid to claim the record outright.

New Zealand 100m and 200m champion Eddie Osei-Nketia bounced back from the disappointment of a shock 100m defeat to Tiaan Whelpton at last weekend’s Potts Classic by completing a tidy sprint double.

The 19-year-old powerhouse proved too strong for the field in the 100m, stopping the clock in a solid 10.54 (+1.4m/s). That was 0.12 clear of his training partner Joseph Millar (Athletics Tauranga) and within 0.06 of the stadium record set by his father Gus.

Later in the 200m, Osei-Nketia used his formidable strength to pull clear of Millar in the final 50m and earn top spot in 21.22 (+2.5m/s). Fast-finishing New Zealand U-20 champion Tommy Te Puni came home strongly to nab second in 21.42 by 0.01 from the fading Millar.

New Zealand 400m hurdles record-holder Portia Bing served notice of her potential to secure the Olympic qualification standard as she powered to victory in a slick stadium record of 56.62 in her specialist event.

Competing in a mixed race, Bing produced an impressive early season performance to come within 0.37 of Rebecca Wardell’s resident record and just a second outside the Tokyo standard.

Chloe Browne meanwhile implemented a masterful tactical display to land the New Zealand U-20 3000m title with an dominant performance.

Sharing the pace for much of the seven-and-a-half lap race with twin sister Bella Browne, the Auckland City athlete made her winning strike for home with 500m remaining, quickly opening up a 10m lead at the bell from Boh Ritchie of Hamilton City Hawks, tracked by Bella in third.

Browne, 17, fought hard on the final lap to maintain her advantage and stopped the clock in 10.03.67 to take gold with Ritchie plugging in gamely to take silver in 10:06.20. Bella ensured a second Browne (10:11.61) would mount the podium in bronze.

Cameron Clark smashed his PB by more than 15 seconds to claim a stunning victory to take the national men’s U-20 3000m title from New Zealand secondary schools champion Zane Powell with an exemplary piece of endurance running.

In a tactical race in which Powell (Pakuranga) and several others took their turn at the front, Clark made his move on the penultimate lap and hit the bell in front with Powell in his streamline.

Entering the final straight, Powell appeared poised on the leader’s shoulder but it was Clark, head-bobbing, from the Christchurch Avon club who responded by accelerating to a memorable win in 8:32.02.

Lauren Bruce put on another exhibition of hammer excellence to back up her victory at last weekend’s Potts Classic with a dominant win.

The 23-year-old Oceania record-holder exceeded the previous stadium record with all six attempts, twice hurling the hammer beyond 70m with her best effort of the night a 71.34m throw in round two.

Camryn Smart added more gloss to her growing reputation by taking victory in a highly competitive women’s 400m. The long-striding 19-year-old North Harbour Bays athlete, and daughter of New Zealand 800m record-holder Toni Hodgkinson, produced an impressive piece of one-lap running to post a time of 54.77, within 0.09 of her lifetime best.

The men’s 800m served up one of the most thrilling races of the night at Alex Beddoes of the Cook Islands claimed a narrow victory from teenage sensation James Harding.

Beddoes (Wesley Athletic and Harrier Club), a 2016 Olympian, held a four-metre lead entering the home straight only for Harding, the national U-17 800m record-holder, to gradually narrow the gap.

In a thrilling finale, Harding just ran out of track as Beddoes hung on to win by just 0.17 in 1:50.88, although Harding was rewarded by a new PB in second.