The strong bond forged between members of the country’s close-knit distance running community will be on show at a talent-laden New Zealand 3000m Senior Championship, which takes place at the Potts Classic in Hawke’s Bay on Saturday.

A sense of working for the collective good will be typified by Sam Tanner, who is targeting Olympic Games qualification in his speciality 1500m event but will form part of one of the strongest fields seen at a domestic 3000m meet for some time.

The focus of Tanner in Hastings will be just as much on helping others as his own success.

“We’re actually quite a close-knit community,” he says of the particularly talented current crop of middle distance runners on these shores.

“We actually communicate quite a lot and often discus where we’re travelling, what our race plans are and what we want to achieve,” he adds.

The 20-year-old is likely to be among the front-runners at the halfway stage and will then do his best to support some of his colleagues, while aiming for a slick time himself.

“I’m pretty open about my plan, I just want to work really hard for the first four laps and will probably take the front and then see how I go for the last few laps,” he says.

Singling out runners to keep an eye on in the men’s event is a tricky task as so much quality is set to line up on the track at Mitre 10 Park in Hastings.

The entry list for the 3000m Championship reads like a who’s who of middle distance running in New Zealand with the up-and-coming Tanner joined by the likes of Eric Speakman, Hamish Carson, Matt Baxter, Hayden Wilde, George Beamish, Julian Oakley and Oli Chignell.

All bring plenty of pedigree into the race with Speakman – whose 3000m best is 7:58.85 – looking to back up a breakthrough performance in winning the Night of 5s over 5000m in Auckland just before Christmas, Carson (PB 7:47.22) having three 3000m national titles under his belt, Baxter (7:47.85) winning the national road race championships last November and Wilde (7:59.15) being the reigning 5000m national champion.

Beamish, the 2019 NCAA Mile champion, clocked 7:44.67 in the United States last February while Oakley ran 7:44.34 just over three years ago, as well as finishing ninth at the 2018 World Indoor Championships. Chignell has a best of 8:03.64 in the 3000m and came third in the recent Night of 5s, ahead of the likes of Baxter and Wilde.

Anneke Grogan (9:50.68) and Jean Kozyniak (9:54.96) are also in contention for honours while three-times New Zealand mountain running champion Sabrina Grogan will look to continue to convert her success to the track after coming second in the Lovelock Classic earlier this month.

Tanner holds the men’s U-20 national record with his personal best of 7:57.57 and says the 3000m helps him build strength for his shorter favourite of 1500m, in which he is now close to booking a ticket to Tokyo.

The Waikato-Bay of Plenty athlete notched a best of 3:36.44 – less than 1.5 seconds off the Olympic qualifying mark – on his home track in Tauranga earlier this month and feels it’s just a matter of time before he breaks that barrier.

“I’m getting really excited, I’ve actually almost secured my spot with points, I just need one more race essentially to get me qualified in the points way,” he says.

“But then there’s the auto-qualification from running 3:35 and I feel like I’ll get that at some stage of the season, especially if I’ve got some proper competition.”

This Saturday in Hastings will be one of the last chances for local fans to see Tanner on home soil as he is planning to return Stateside – where he will be based at the University of Washington under the tutelage of coach Andy Powell – after having a crack at the New Zealand Mile Championships at the Cooks Classic in Whanganui at the end of this month.

“It’s exciting but will also be a bit sad to leave. We’ve talked about all the different options and I think it’s the best option in regards to my future as a runner, not just this year but career-wise,” says Tanner, who has recently made impressive progress as part of the Craig Kirkwood-coached stable of runners in Tauranga, which includes the multi-talented Wilde.

“So that’s the plan at this stage, unless the US shuts back down and all the races start getting cancelled. But I believe a lot of the pro races are going to keep going and it’s Andy’s goal to get me into those, he’s already got me into a lot of them.”

Tanner puts his rapid gains of recent months down to the influence of Kirkwood and close friend Wilde so leaving New Zealand was not an easy decision, especially at such an exciting time for Kiwi distance running.

Wilde and Tanner are at the forefront of a batch of highly promising young athletes while veteran Nick Willis is still leading the way at the age of 37, this week breaking a long-standing record set by the legendary Sir John Walker in running under four minutes for the mile for 19 consecutive years.

“I feel like a lot of New Zealand distance runners are just really inspired by that and the other greats,” Tanner says.

“I suppose we’ve had a younger community slowing building up to this and I kind of knew this year was going to come at some stage where a lot of Kiwi athletes, particularly a few years around my age, were going to build each other up and really put their head down and run some good races,” he adds.

“So I think that’s really been helping to build a strong base of a community and it’s led to some good success.”

The New Zealand 3000m Senior Championship is part of the Potts Classic at Mitre 10 Park Hawke’s Bay in Hastings. The women’s race will take place at 7pm while the men’s event is the last of the evening at 7.40pm.

The Potts Classic will be live streamed on the Sky Sport Next YouTube channel. The live streaming will cover the elite hammer from 2pm before taking a break and returning at 4.30pm for an action-packed evening of track and field.

To view the start lists and results please click here 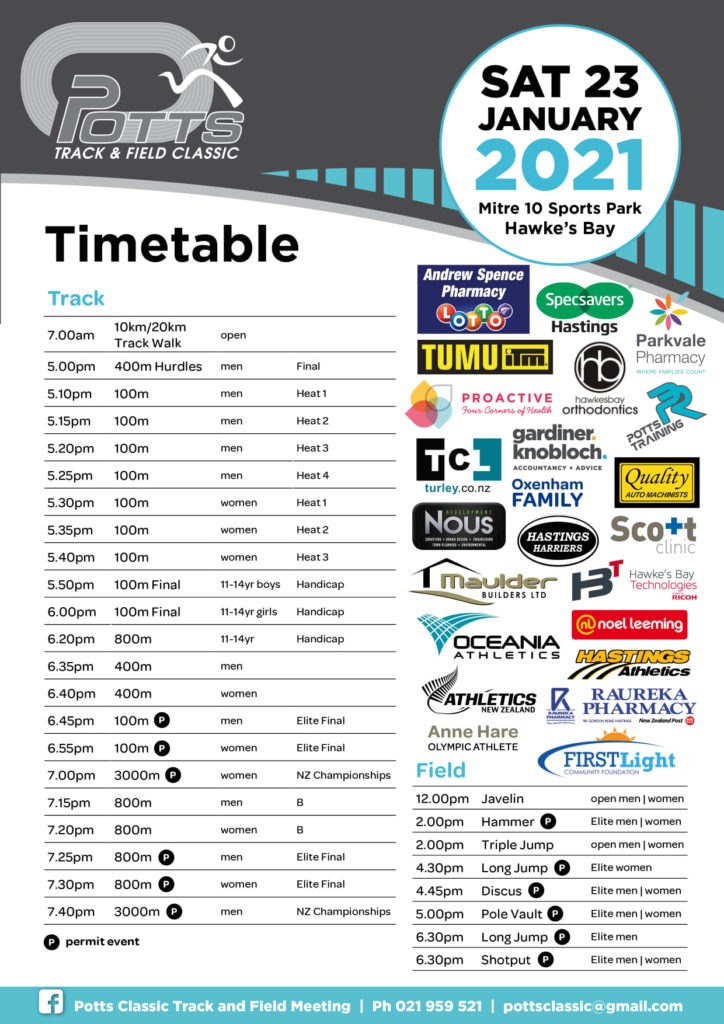