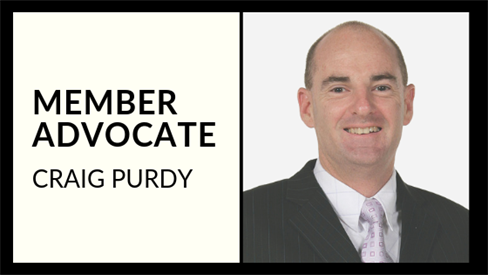 Craig Purdy has served as Athletics NZ Ombudsman – recently renamed Member Advocate – for the past 13 years. We find out more about Craig and why the position provides lots of unseen but critical background work.

What is your athletics background?

My father was a Harrier and some of my earliest memories were watching him compete at Hurworth for New Plymouth Harriers and then as a youngster starting my athletics career at Pukekura Park on a Tuesday night during the summer. I later went on to compete as a 400m athlete and represented New Zealand at the first World Junior Championships in Athens in 1986 and at the 1990 Commonwealth Games in Auckland. I won three national 400m titles (1988-1990) – and ran a 400m PB of 46.52 (currently 12th on the all-time New Zealand lists). I later participated recreationally in 10kms, half-marathons and events such as the Rotorua Marathon, the Goat Adventure Run and the Kauri Run. Back in 2000 I was at an antenatal class with Mark Harris, a former Board member of Athletics NZ, who asked if I would be interested in putting my name forward for the Board. At the time Athletics NZ was insolvent and in statutory management. I was part of a clean sweep of the Board; it was the beginning of a whole new era in our sport in line with the establishment of Sport NZ. I served on the Board for six years from 2000 to 2006 and as chair from 2004 to 2006.

How did you take up the role of Member Advocate?

Around this time I had an epiphany that I wanted to move away from my previous role as a general manager in the travel industry to become a Chartered Accountant. I guess I always liked the numbers! Combining full-time work and study with a young family, I decided it was too much to continue in my role with the Board. At that point I was asked if I would consider being Ombudsman because the previous incumbent had retired. I accepted. It was my way of staying involved in the sport I love.

What does your role as Member Advocate entail?

This is a Board appointed role that acts as a point of reference when a member wishes to raise a matter they feel has not been fully considered or resolved by Athletics NZ staff and/or is of a confidential or personal nature that would benefit from disclosure to a person independent from the day-to-day operations of Athletics NZ. I can also step in if the CEO wants me to look into a matter and provide an independent view. I cannot make a decision but I can provide recommendations to the CEO or the Board. For years the role was known as Ombudsman but we thought this sounded a big old-fashioned, so we’ve recently changed the name to Member Advocate.

How do you communicate with the people you deal with as member advocate?

Typically through email, phone or Skype. It will then be my job to research the matter, talk to whoever I need and then come up with a view as to a recommendation for resolution.

Can you give me any examples of the kind of issues you have to deal with?

I can deal with a whole range of issues from disagreements between athletes, coaches and officials to entry or non-entry into events or disagreements between individuals that escalate beyond accepted communication conventions. Other issues might include athletes harbouring concerns about qualification marks for championships or matters relating to team events.

How many issues would you typically deal with each year?

The issues have become less frequent in recent years, which is a good thing and hopefully this means the sport is in a much better place than it used to be. I probably look into two or three issues a year. This doesn’t sound many but it can be quite a time-consuming process. The research can often be quite intensive and can demand a lot of scouring through rules, by-laws, policies and the like.

What are the biggest challenges you face?

It is establishing the facts, so I have the correct information to make a recommendation. The facts I’m trying to establish can be anything around a qualifying standard or access to an event or even an issue around financial matters. My role is to identify the documentation, what the rules/policies and criteria are and have these been applied as intended. Athletics is a passionate sport but sometimes I need to cut through the passion to establish the facts.

What skills and qualities do you need as Member Advocate?

I believe one of the reasons I was asked to serve the role is because of my varied background in the sport. I was a former international athlete and later a recreational runner. I also spent six years as an Athletics NZ Board member, where I developed a good understanding of the administrative side of the sport. I was also part of the rules and by-laws sub-committee, so I have an empathy with officials and selectors.

What do like best about your role as Member Advocate?

It is getting a resolution that both parties can live with. If everyone can come away satisfied and I have done everything I can, then I am pleased.

Are you available to assist any Athletics NZ member?

Craig’s contact details can be found on the Athletics NZ website – About Us – Our People, or by clicking here.