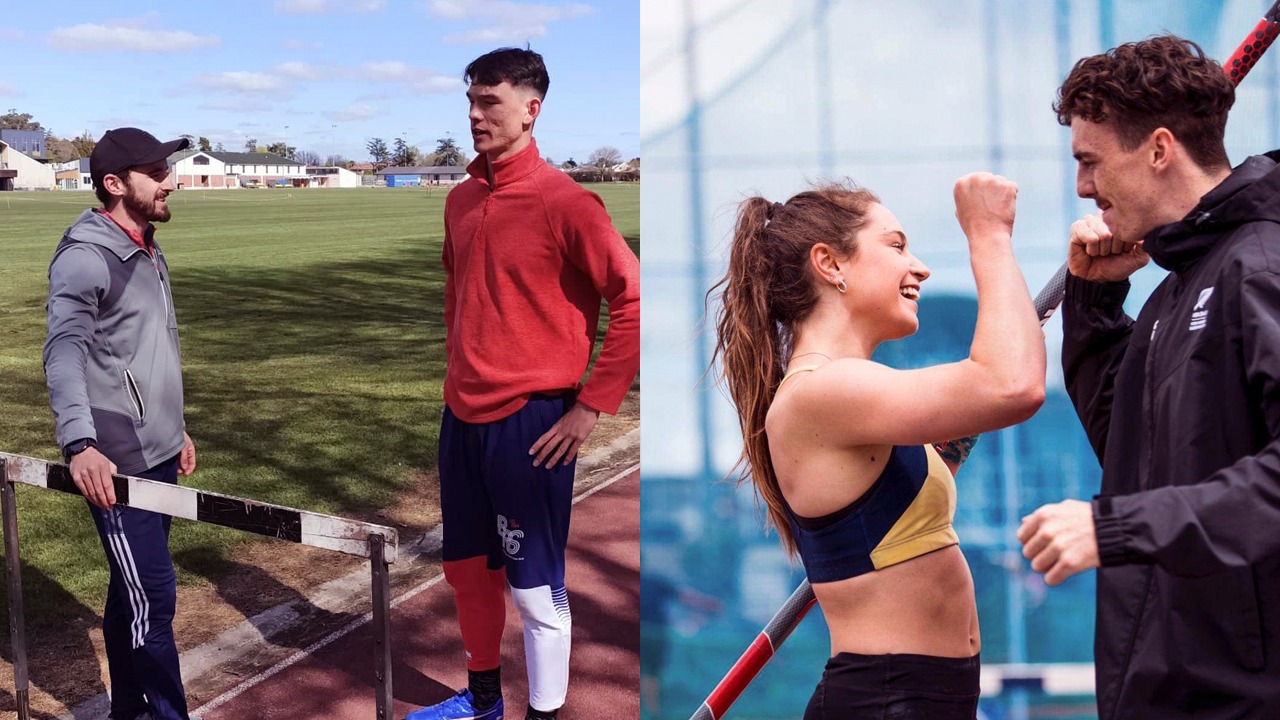 James Sandilands (far left) and James Steyn (far right) are both national championship-winning athletes who are currently making their mark as emerging coaches.

A pair of national champion athletes have in more recent times taken on respective roles as assistants to two prominent New Zealand coaches. Steve Landells chats to James Steyn and James Sandilands about their rich experiences and how it has aided their overall athletics education.

The lateral and flexible thinking required in his role as assistant pole vault coach to Jeremy McColl has been “incredibly helpful” in aiding James Steyn’s personal pole vault development.

The Auckland-based two-time senior men’s pole vault champion committed to supporting Jeremy’s developmental athletes in November last year and has so far revelled in the role.

With James coaching a group of around 18 vaulters ranging in age from 14 to 31 this has allowed Jeremy more time to focus his efforts on his core group which includes: Eliza McCartney, Olivia McTaggart, Imogen Ayris, Nick Southgate, Ettiene Du Preez and James himself.

And the 22-year-old North Harbour Bays vaulter has not regretted the move.

“I am coaching team-mates and friends, so I have a vested interest in their performance and progression,” explains James. “We all share the same passion for the sport, which has made it easier, it has been an amazing experience.”

James’ coaching journey began by accident a couple of years ago after a masters athlete approached him to ask for some technical input. That later graduated into a more formal coaching arrangement for nine months or so until James could no longer commit to the role after taking up a full-time position as a junior product development manager.

However, after leaving this position in an effort to focus more fully on his athletics career the 5.50m vaulter – who sits number two on the all-time New Zealand rankings – was approached by Jeremy about the role as his assistant coach and he leapt at the opportunity.

“Jeremy had seen my interest and willingness to get involved in coaching and after leaving my job it seemed like a good overlap to coach and train personally as an athlete. As I work with Jeremy anyway we have a similar way of thinking, given, of course, that my thinking was shaped by him.”

During their time working together, Jeremy has been a wealth of knowledge both inside and out of the training environment, according to James.

“Jeremy and I have a few points of commonality,” explains James. “We have a shared passion for surfing and obviously a love of pole vaulting. We’ve spent a lot of time on trips together surfing and talking pole vaulting in more of an informal sense, which is where I’ve learned so much.”

Assisting and supporting a group of athletes the tier down from Jeremy’s core group, James’ role is to develop them to a point where he can hand them on to Jeremy with the foundation skills to enable them to develop at the next level.

While fully committed to that task, it needs to be remembered, however, that James’ primary goal is to develop his own athletics career. With this in mind, Jeremy has organised a timetable which allows him to rest after his sessions before coaching.

“It has been incredibly helpful,” he adds. “I first noticed this when I was coaching the masters athlete because they were a completely different type of athlete in a different stage of their athlete-life cycle. This forces you to think more laterally and by taking the time to address different physical attributes you start to wonder about your own technique.

“It would be easy to become stuck on my workings with Jeremy but I think the coaching role allows for a bit of introspection. Through that I learn much more than focusing solely on myself. The whole process has been unreal.”

It is no exaggeration to say that 2020 New Zealand senior men’s 110m hurdles champion James Sandilands was born to coach.

From the age of 15 he began coaching junior football teams in his home town of Pleasant Point near Timaru. Later James coached taekwondo for a period before moving north to Canterbury to study, where he first engaged in coaching athletics at Christchurch Avon AC.

In more recent years, James worked as a strength and conditioning intern at HPSNZ and has since developed his own thriving coaching business (Outtrain) assisting people of all standards to reach a range of different goals.

So when an opportunity presented itself in early-2020 to work as an assistant to Athletics NZ jumps and combined events coach Terry Lomax, it seemed a natural fit for the Old Boys United AC athlete.

“The role came about after Terry identified that Hamish Kerr (New Zealand men’s high jump record-holder) was a key athlete in his squad with the potential to make the Tokyo Olympics squad.

“Terry knew he would be spending more time with Hamish and he needed someone to assist with coaching the rest of the training squad during times when he was more focused on Hamish.”

As a three-time senior men’s 110m hurdles medallist and former national U20 men’s high jump champion his knowhow has been tapped into by the group in these areas.

Never complacent James has enjoyed developing his technical knowledge in a range of disciplines, but there have been other fascinating areas to the role.

“Something that has really interested me has been athlete communication and understanding the needs of the athletes and how to communicate with them individually. Trying to explore that relationship to enable me to get the most out of everyone has been a really interesting part of the journey.”

For other athletes with a curiousness to learn more about their sports through “multiple lenses” – James would encourage others to try their hand at coaching.

In fact, he insists his coaching commitments have undoubtedly played a part in developing James as an athlete.

“It has given me a different lens to really understand my event and sport as a whole,” he explains. “It has been an interesting journey. I can get quite caught up in the technical aspects of the sport and I can be quite particular but I now know when to switch that part off and trust myself. As a coach too it is also important to know when to keep quiet and let the athlete explore.”