Fine conditions bring out the best at Porritt Classic 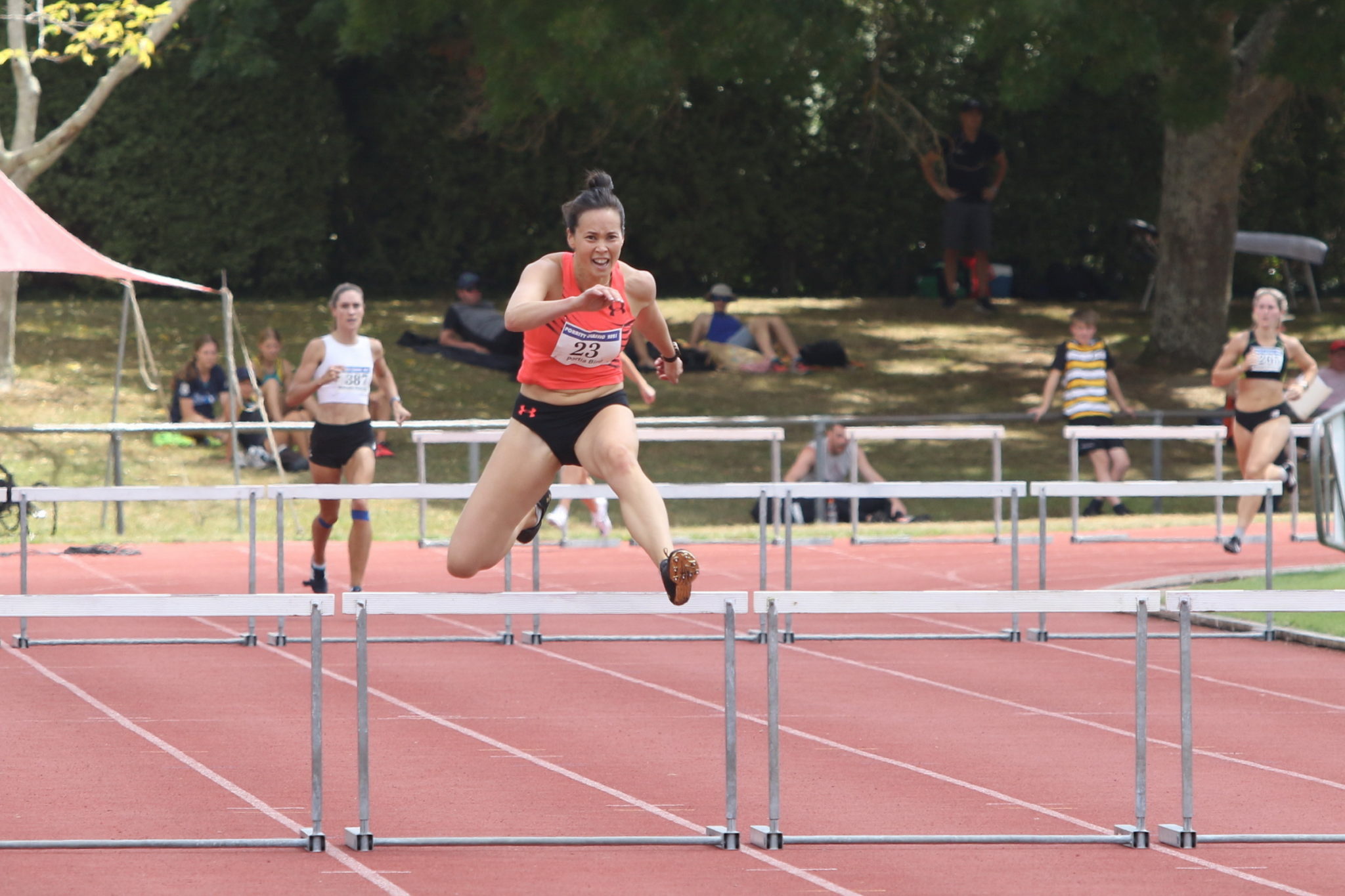 Portia Bing on her way to notching a New Zealand resident record in the 400m hurdles (Photo: Macspeedfoto/Alan McDonald)

In perfect summer conditions, the Porritt Classic served up a New Zealand resident record, six meeting records, a pair of national Para records and a slew of personal bests on a thrilling day of action in Hamilton.

Led by Portia Bing’s blistering New Zealand resident record in the 400m hurdles, a formidable hammer throw by Lauren Bruce and yet another shot put victory for Jacko Gill over Tom Walsh, the day was chock full of outstanding memories on a great advertisement for the strength in depth of New Zealand athletics.

In one of the first track events of the day, Bing made the most of the hot weather and negligible winds to produce one of the day’s outstanding track performances to smash the 18-year-old New Zealand resident record with an emphatic victory in the women’s 400m hurdles.

The Waitakere Athletics athlete quicky established a huge lead and, despite a slight stutter leading into the final hurdle, she was delighted to have recorded a time of 55.99 – the second fastest of her career and within 0.13 of her national record.

Bing, who shaved 0.26 from Rebecca Wardell’s resident record, said: “I’m really stoked. It has taken me a few runs this season to get there. Last week in Christchurch I ran a 58-second time because of the weather conditions, which was frustrating. So to turn it around from last week and set a resident record is amazing.”

In one of the concluding events of the programme, Lauren Bruce hurled the hammer out to a mighty meet record of 73.22m to inflict defeat on rival Julia Ratcliffe in her own backyard with the second-longest women’s hammer throw ever seen in New Zealand.

The 23-year-old Oceania record holder, who set that mark of 73.47m in Hastings in September, bettered Ratcliffe’s effort of 71.39m by 36cm in round two to take control of the competition.

Commonwealth champion Ratcliffe hurled the hammer out to 71.18m in round five but, with the competition already in her pocket, Bruce saved her best until last to come within 25cm of her Oceania record.

Bruce said of her winning throw: “I knew I had got on it a bit more than the other throws, I was hoping it was going to be a little bit further, like 74 metres, but I knew it was better than all my other throws.

“After throwing 73m last year, I have come back with a whole lot more confidence, but wanting to prove to myself I was a 73m thrower. I think I’ve done that now and it is my eighth competition in a row over 70m.” 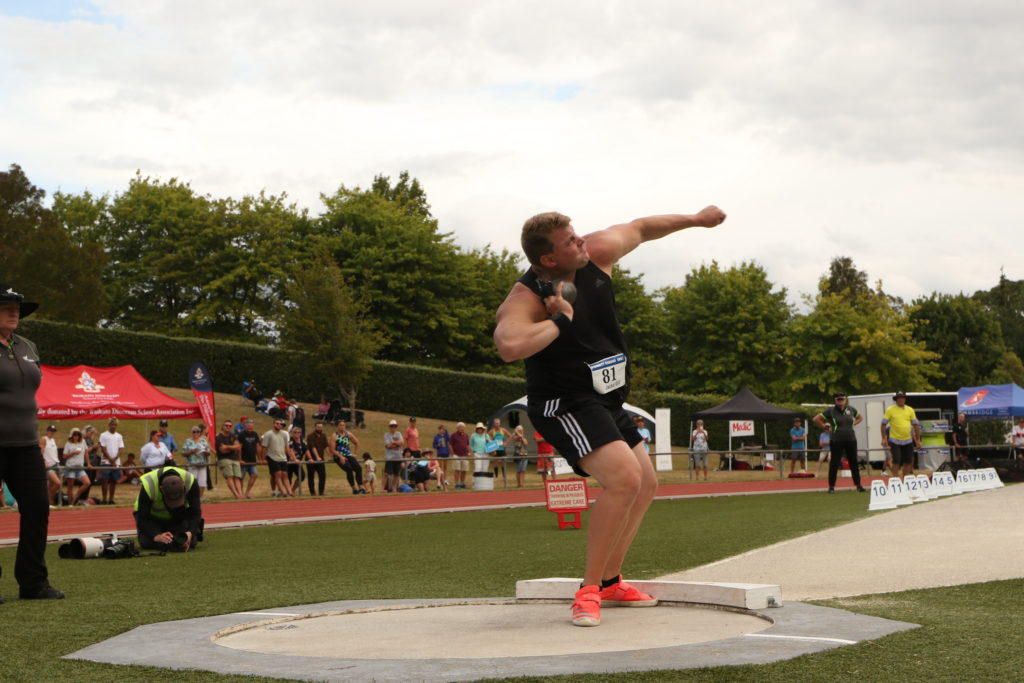 Jacko Gill extended his winning sequence over Kiwi shot rival Tom Walsh to four in a row after matching his personal best distance of 21.52m, set only seven days earlier in Christchurch.

In yet another absorbing showdown between the Kiwi shot put titans, Gill responded to impressive first and second round efforts of 21.39m and 21.45m by the 2016 Olympic bronze medallist, to fire out his winning throw in round two.

Walsh unleashed a consistent series with 21.33m and 21.44m efforts in rounds three and four but ultimately it was Gill who maintained his recent superiority.

Nick Palmer (17.91m) twice bettered his personal best in the course of the competition as the 20-year-old Hastings AC athlete bagged third.

Zoe Hobbs reaffirmed her red-hot form over the 100m to take top spot in a meeting record 11.39 (-0.1m/s) as the 23-year-old Aucklander came within 0.04 of her New Zealand resident record set last month.

Hobbs’ training partner Symone Tafuna’i came within 0.01 of her lifetime best to grab second in 11.84 with Brooke Somerfield 0.10 back in third. In fourth, 18-year-old Hinewai Knowles hacked a huge 0.21 from her best to record 11.95.

Hobbs, who continually strives for perfection, said of her 11.39 clocking: “It was a little bit gutting. I was hoping for another personal best but today was good to get some practice under my belt ahead of nationals.

“It is promising to know I can run that time into a slight headwind. It is exciting going into the rest of the season.”

In the women’s 200m, Hobbs had to be satisfied with second place as Georgia Hulls claimed the scalp of her training partner for the second successive week, notching a meet record 23.79 (-0.2m/s). Hobbs finished some 0.11 further back for second with Natasha Eady matching her season’s best time of 23.94 in third.

Hobbs, Hulls, Tafuna’i and Eady then concluded a busy day by teaming up for the New Zealand Black quartet to win the 4x100m in a swift 44.72 – just 0.12 shy of the 20-year New Zealand resident record.

Osei-Nketia avenged his 100m defeat at the hands of Whelpton in Hastings last month to stop the clock in a season’s best mark of 10.28 (+0.1m/s) – 0.02 clear of the Christchurch Old Boys United athlete.

Unlike their last meeting at the Potts Classic, Whelpton did not establish the same superiority out of the blocks and, although the 20-year-old held a narrow advantage over the first half of the race, Osei-Nketia powered home in the final 30m to grab a confidence-boosting win.

In another great result for New Zealand sprinting, Whelpton sliced a further 0.07 from his personal best to continue his hugely exciting progression. Teenager Mogammed Smith (10.79) shaved 0.04 from his lifetime best to claim third.

An ecstatic Osei-Nketia said: “I feel like I’m back. I’ve been in a bit of a drought lately, so thank God I put down a good time. I felt really good. I just needed to stick by my tactics and let nothing get into my mind.”

Osei-Nketia later completed the sprint double with victory in the 200m in a time of 21.46 (-0/9m/s). Teenage talent Tommy Te Puni finished strongly to place second in 21.59 with Shay Veitch, who earlier had climbed to number one in the New Zealand men’s long jump rankings for 2021 courtesy of a 7.63m leap, registering 21.68 for third. 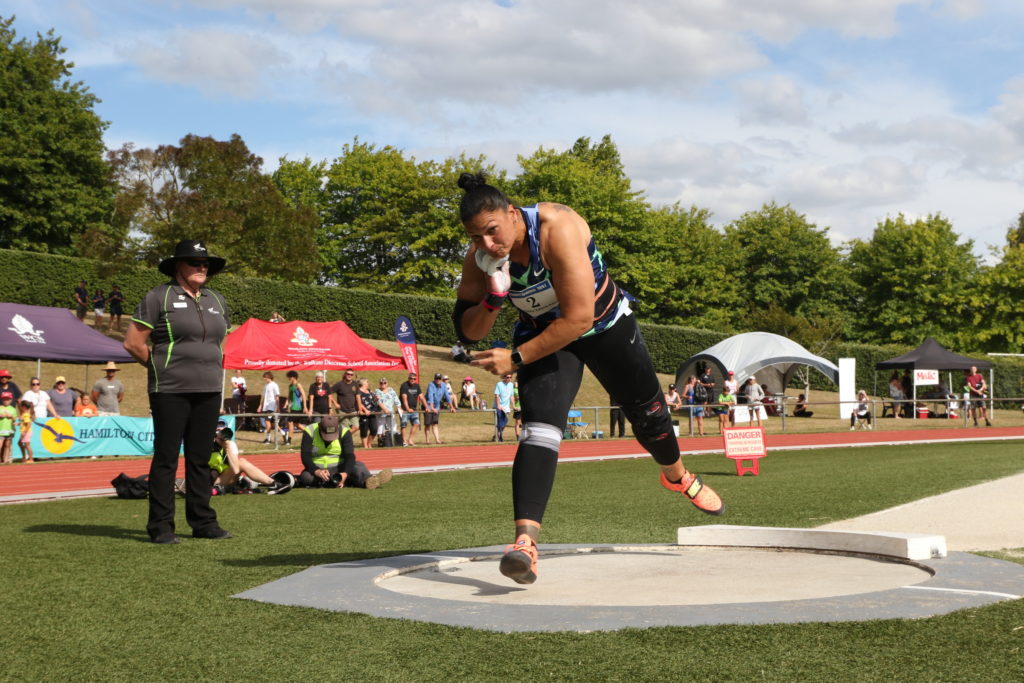 Some 19 years on from her maiden victory at the Porritt Classic, Dame Valerie Adams once again proved too strong for the rest in Hamilton.

Continuing to show gradual improvement this season, Adams produced a consistent series with all six throws beyond 18m.

Opening with a season’s best of 18.48m, she added a further 20cm on this mark in round five before powering the shot out to 18.50m in the final stanza.

World U-20 champion Maddison-Lee Wesche fired the metal orb out to a best of 17.43m in round three to take second spot, although she opted to preserve her body for the nationals by passing on the final two rounds.

“It was very consistent,” explained Adams. “The dots are slowly connecting. I’m very happy with today’s performance, but there’s so much more there. I’m going to take faith from the performance.”

The middle-distances did not disappoint with James Preston edging Cook Islander Alex Beddoes by just 0.01 in a classic men’s 800m duel. Preston took out the race win in a meeting record 1:47.84 from Beddoes, who it should be noted wiped the best part of two-and-a-half seconds from his lifetime best. 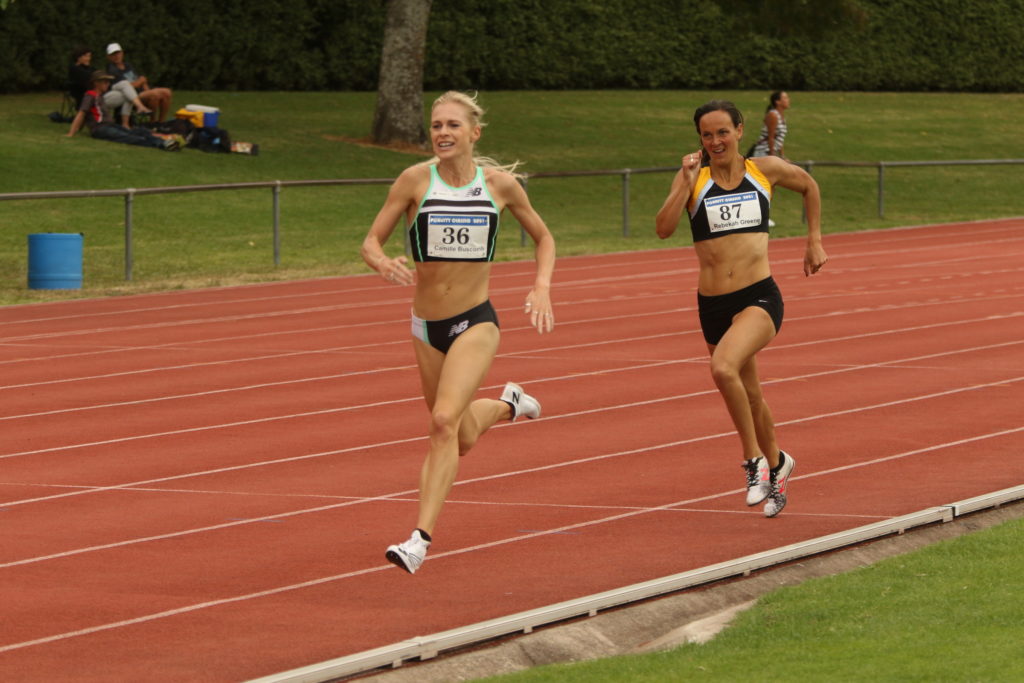 Camille Buscomb holds off the challenge of Rebekah Greene to win the 1500m (Photo: Macspeedfoto/Alan McDonald)

The top three all posted personal bests in a captivating women’s 1500m as Camille Buscomb claimed a high-class win on her home track.

The recently-minted national mile champion repelled a strong challenge from Rebekah Greene to stop the clock in 4:13.47 and trim 0.32 from her six-year-old best. Greene was also dragged to a stand-out 4:14.81 to take more than two-and-a-half seconds from her personal best, which dated back to 2014. New Zealand 3000m silver medallist Susannah Lynch maintained the personal best trend by dismantling her previous best by more than 10 seconds to record 4:21.46 for third.

The 400m runners also benefited from the benign conditions at Porritt Stadium. National U-20 400m champion Isabel Neal shattered her previous personal best by the best part of a second to clinch top spot in the women’s one-lap race, posting 54.61 as the 19-year-old elevated herself to number one on the 2021 New Zealand rankings.

On his 400m debut, Hamish Gill served notice of his exciting one-lap potential by powering to victory in a majestic clocking of 47.72. The 23-year-old, a 10.4 100m and sub-21 second 200m sprinter, took the race by the scruff of the neck from the outset and, running like a seasoned 400m athlete, proved too strong for the opposition. Rowan Blaikie was rewarded with a 0.12 personal best of 48.86 in second. 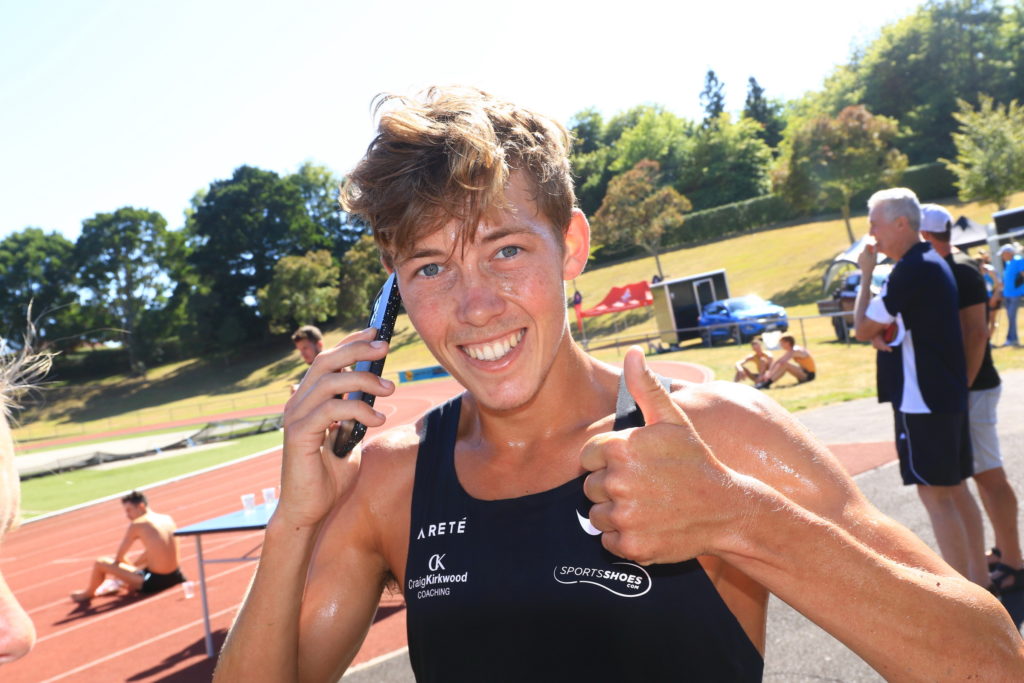 Earlier in the day, the highly-anticipated men’s 5000m – which was moved to a 10am start from its original start time on Friday evening to ensure more favourable conditions – lived up to expectations as Hayden Wilde claimed an outstanding victory in a meet record 13:29.47 to leap to 13th on the all-time New Zealand rankings.

The 23-year-old international triathlete, who over the past 12 months or so has developed into one the country’s finest domestic runners, delivered a top-class display to scalp almost 18 seconds from his previous best.

Paced excellently by Matthew Taylor – who was tracked by Hamish Carson, Wilde, Eric Speakman and Oli Chignell for the first 2km – it was a little after halfway when the race started to unravel. Run at a blistering pace, Carson dropped off and shortly after Speakman abandoned attempts to finish the race.

All of a sudden, it turned into a two-way tussle between the diminutive Chignell and the much-taller Wilde as the pair continued to maintain the pace, hitting 4km in a swift 10:48.

Wilde, the reigning national 5000m champion, launched his winning strike down the backstraight of the final lap, surging past Chignell before powering down the home straight to a noteworthy sub-13:30 clocking.

Behind, Chignell maintained his outstanding form of the summer by trimming a further 1.5 seconds from his 5000m personal best previously set at the Night of 5s, recording 13:36.74. 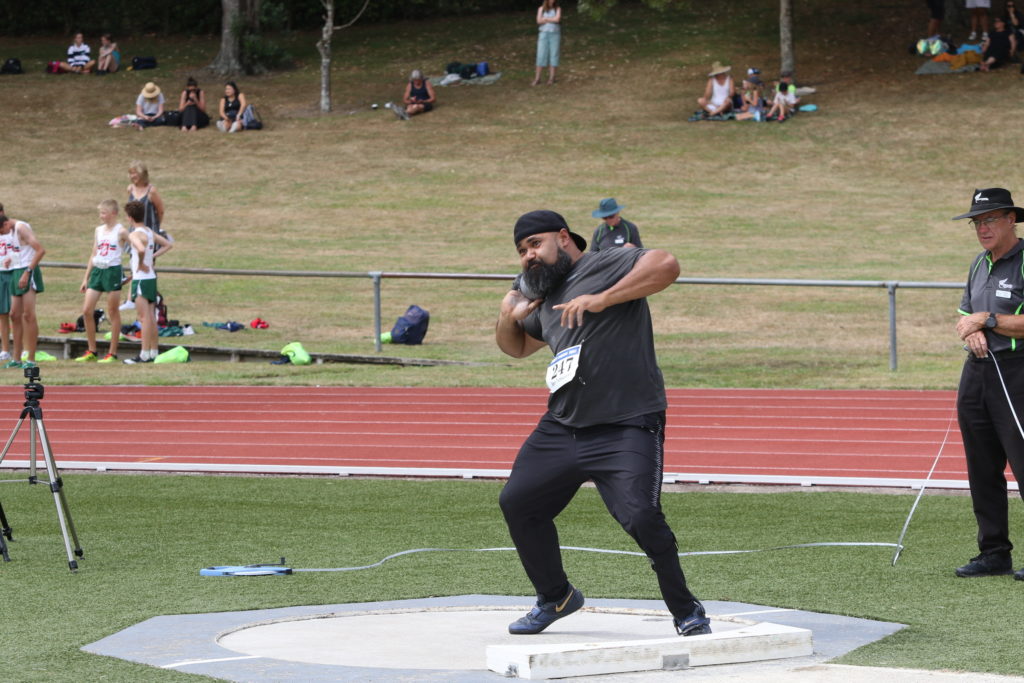 Aitchison, the World Para 200m silver medallist, trimmed 0.04 from her national T36 200m record time by posting a blistering 29.60 on her home track.

Tuimaseve impressed in the men’s para shot by improving his national F37 record twice. The Papakura athlete set his first New Zealand record of the day in round five, launching the 5kg metal ball out to 12.57m before improving on this by a further 8cm with his final effort.