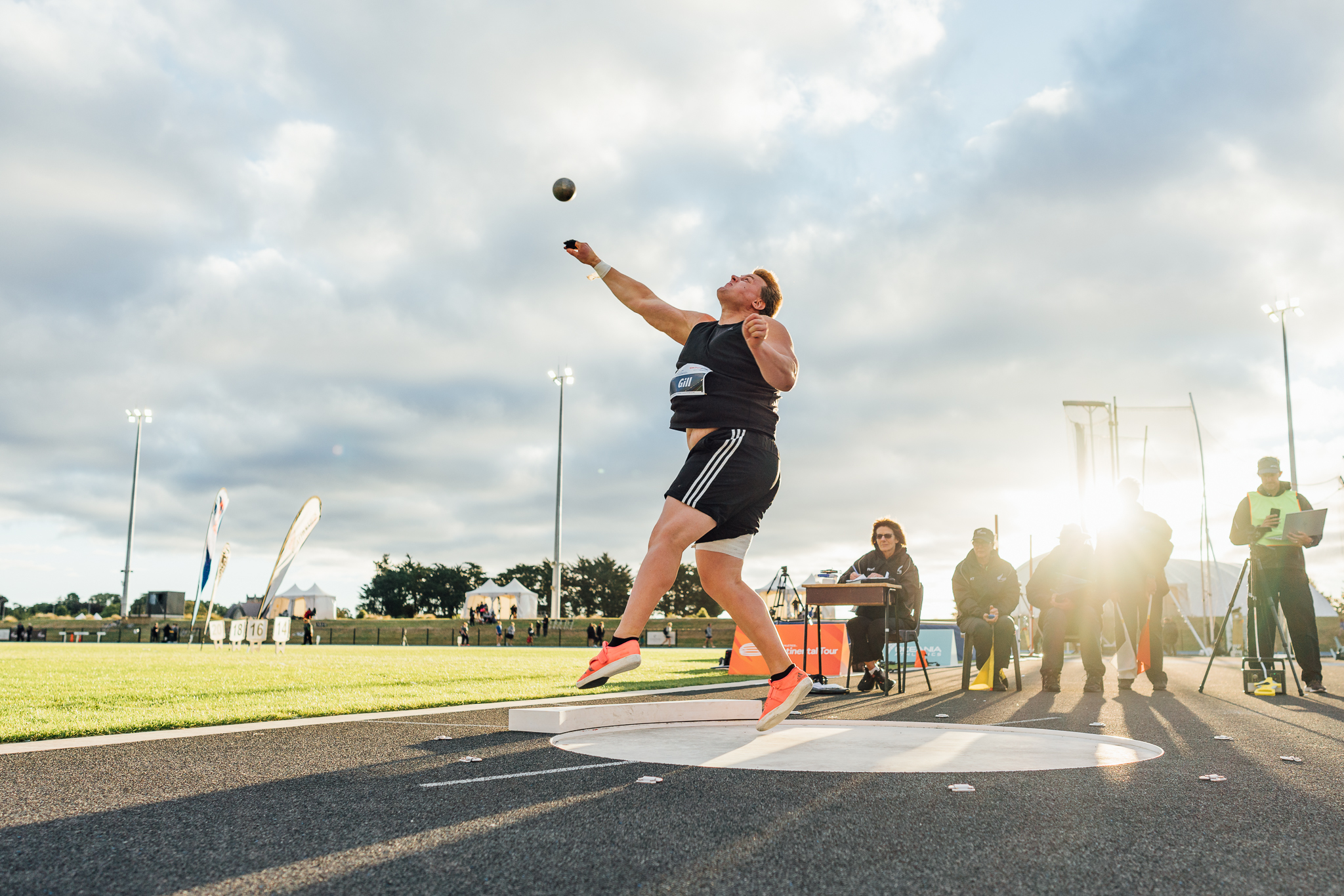 Competing in Walsh’s backyard, Gill produced a masterclass of throwing by adding 5cm to his personal best, hurling the 7.26kg orb out to a mighty 21.52m in round one.

Three-time world champion Walsh responded with a season’s best of 21.43m in the opening round before bettering that distance by a further 3cm in round three but Gill, who unleashed his second-best effort of the night in round six with 21.44m, would not be denied.

Remarkably, it was Gill’s second competition of the day, having earlier thrown 21.19m at an event to mark the tenth anniversary of Shaka Sola’s Throwing Academy in Lower Hutt before flying down to Christchurch.

“It was really great, I’m stoked to get the win against Tom,” an elated Gill said.

“He’s the best we’ve had in New Zealand, so any time I can beat him it shows I’m going pretty well. I’m very happy.”

He was typically honest when quizzed on why he is throwing so well at the moment and consistently beating Walsh.

“He’s in a heavy phase of training and I’m maybe in a lighter phase. Having said that, I think there is more to come from both of us.” 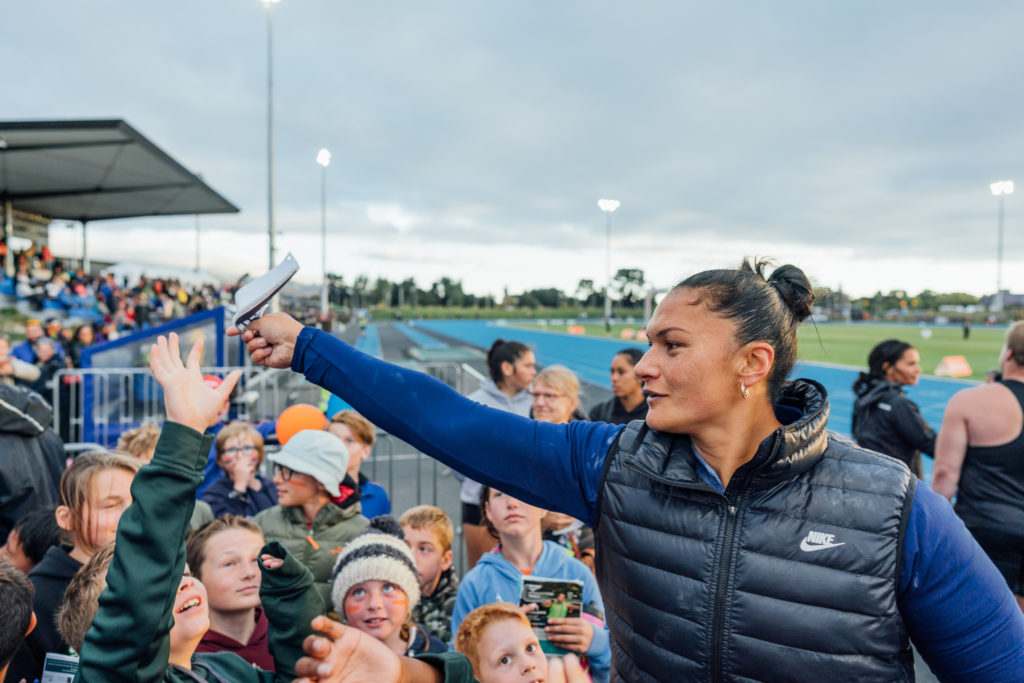 Dame Valerie Adams meanwhile added 7cm to her season’s best to secure victory in the women’s shot with a best throw of 18.41m – her longest competitive throw for 11 months.

The two-time Olympic champion recently relocated to Christchurch under the coaching guidance of Dale Stevenson and her opening two efforts of 18.30m and 18.41m suggested she was in the mood to go beyond the automatic Olympic qualifier of 18.50m.

But she struggled to find her groove in the second half of the competition and it was not to be on this occasion.

“I showed improved consistency and it was better tonight, although I was hoping for a bit more,” Adams said.

“We’ve been working on a few things but I didn’t get it together tonight. It is a step in the right direction. We just need to keep working, look forward to the next competition and see if we can build on that.”

Kai Tupu-South of Takapuna added 12cm to her lifetime best to place second with 15.56m.

Paralympic champion Anna Grimaldi lit up the women’s long jump as she added 6cm on to her T47 national record with a magnificent first-round effort of 5.78m (+0.2m/s).

Grimaldi, who celebrates her 24th birthday next week, is currently in the form of her life after also posting her previous New Zealand record in her home city of Dunedin in October. And tonight at a wind-swept Nga Puna Wai she once again offered firm evidence of her current shape to create a slice of history and claim fourth overall in the open competition.

“I’m very happy, you can’t ask to open a comp with more than that,” she said.

“I was really stoked, it felt nice and floaty off the board, I knew it was pretty good. When I saw the tape, I was really excited. It is my first big competition of the year and I’m excited to open it with a national record.”

Tegan Duffy (Christchurch Old Boys) was a surprise winner of the competition, adding 18cm to her previous best with a 5.98m (-0.7m/s) effort in round three.

The gifted 19-year-old North Harbour Bays athlete, who back in 2018 captured the Youth Olympic title, has been one of the star performers so far this domestic season.

In Hastings, he fired the 2kg discus out to 64.29m and tonight he proved that was no fluke as his consistent series was highlighted by a 63.84m in round two, bettered by a 63.93m mark with his penultimate throw.

Lauren Bruce extended her streak to seven straight hammer competitions beyond 70m as the Oceania record-holder maintained her outstanding form.

At her home track at Nga Puna Wai, the Christchurch-based athlete opened with her best of the night, a 71.22m hurl, to bank another comfortable win with a meet record. 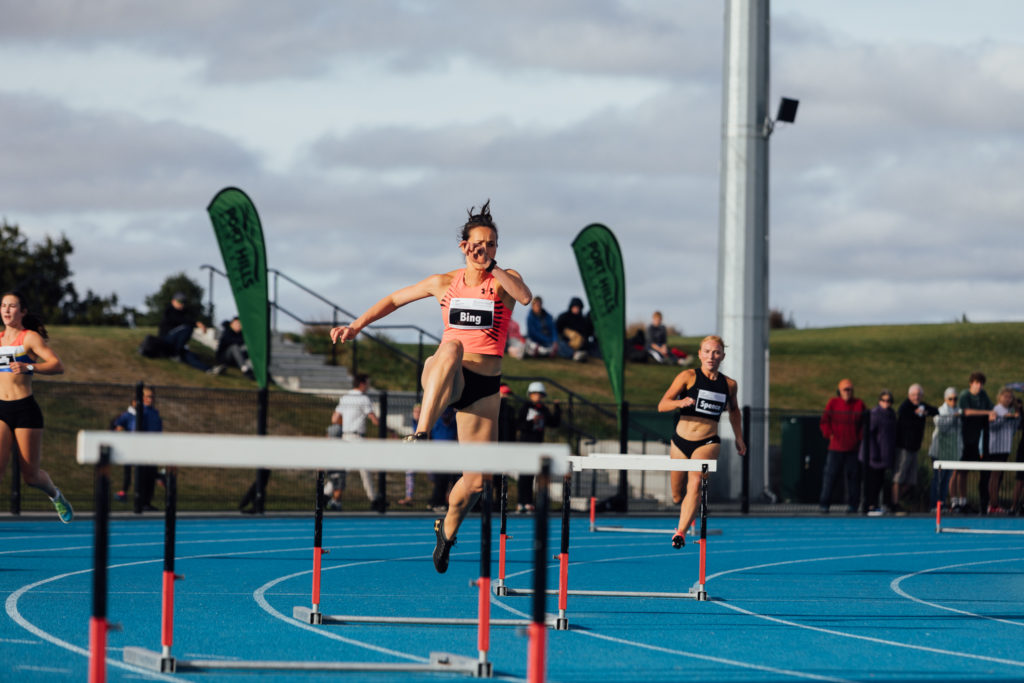 Portia Bing on her way to another hurdles victory (Photo: Michael Dawson)

Portia Bing continued her 100 per cent winning record in the 400m hurdles this season, although the windy conditions denied her the chance of a serious assault on the Olympic qualification.

The long-striding New Zealand record-holder made a strong start but, buffeted by the gusting winds in the second half of the race, crossed the line in 58.50. Home athlete Maddy Spence (63.36) grabbed second.

National 200m champion Eddie Osei-Nketia avenged his shock 100m defeat to Tiaan Whelpton at the Potts Classic two weeks ago to edge a narrow victory by just 0.04 in an exhilarating men’s 200m.

Whelpton, from the Christchurch Old Boys club, has been one of the breakout stars of the 2021 domestic season and made the quicker start, holding a clear advantage entering the home straight.

But the powerfully-built Osei-Nketia was determined to claim the race win and successfully hunted down his South African-born rival in the final few strides to win in 21.24 (-0.8m/s). 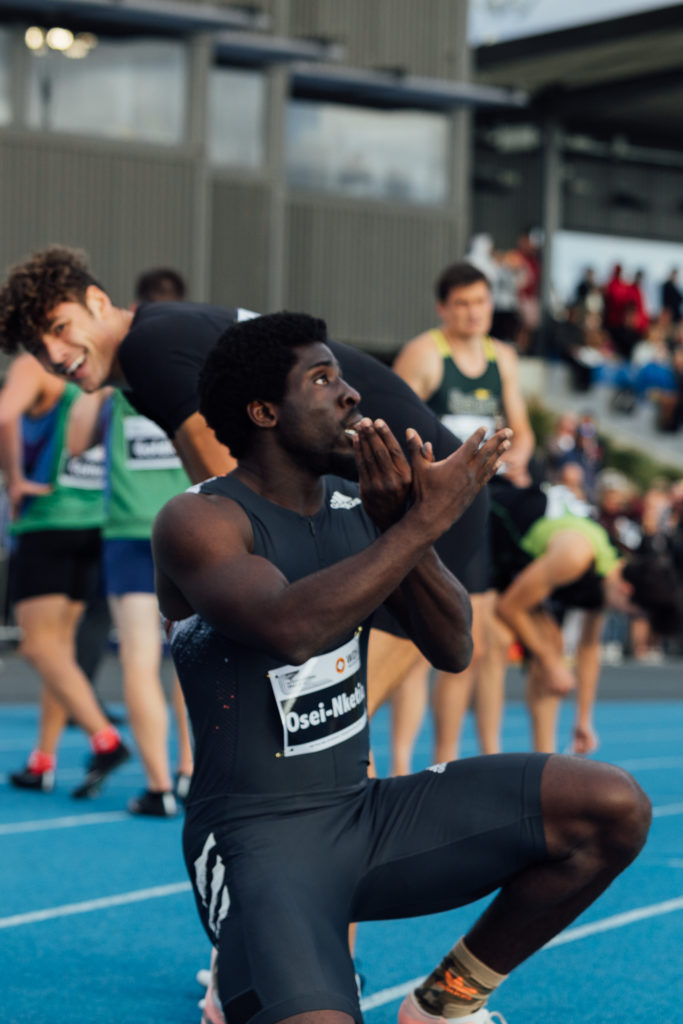 Hobbs, New Zealand’s fastest woman, has been in scintillating form this season but had earlier withdrawn from the women’s 4x100m nursing a minor niggle.

Hulls seized control in the final quarter of the race to claim top spot in 24.44. National 200m silver medallist Rosie Elliott of Hill City was rewarded with second (24.85) with Natasha Eady awarded third on a photo finish from Hobbs, after both posted 25.06. 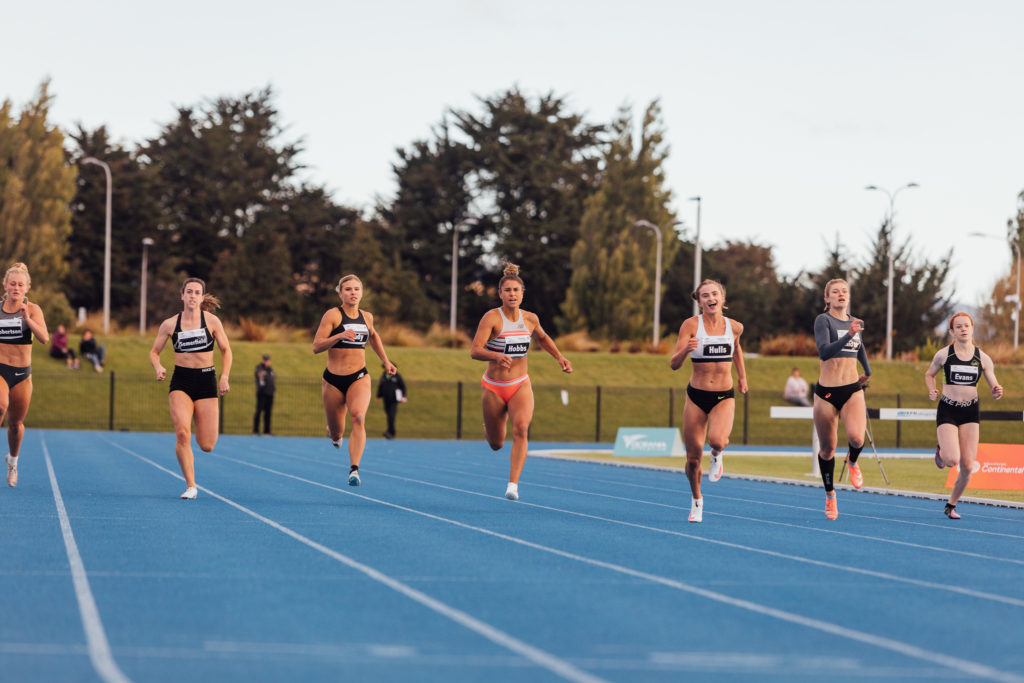 Hamish Kerr has been in outstanding form this season, following a pair of 2.27m jumps, and the Christchurch Old Boys athlete once again proved unbeatable in the men’s high jump.

The windy conditions made life tough for jumping and the joint New Zealand record-holder had to be satisfied tonight with a second-time clearance and meet record of 2.20m to take out the competition.

Six-time national 1500m champion Hamish Carson drew up his vast reserves of experience to repel the challenge of in-form James Preston and provide a rousing finale to the track action at Nga Puni Wai.

With 4:03-miler Benjamin Wall setting the pace through to the final 550m, it was Julian Oakley, the 2020 national 1500m silver medallist, who swept into the lead at the bell tracked by Carson and Preston.

Down the back straight it was Preston, the New Zealand 800m number one, who surged to the front but Carson responded before launching his winning assault down the home straight to kick past his junior by nine years to the race win in 3:44.63. 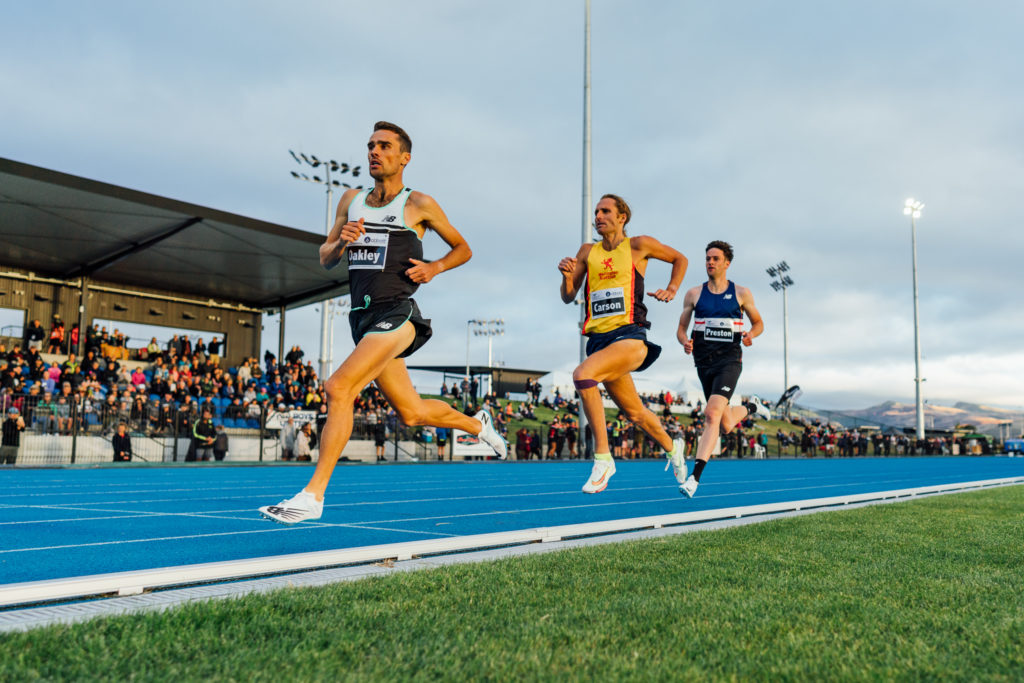 Preston had the satisfaction of trimming just over a second from his lifetime best in second (3:45.50) with Oakley back in third (3:48.46).

Patience and strength were rewarded in a thrilling women’s 800m as Camille Buscomb overhauled Rebekah Greene in the latter stages to claim an eye-catching victory in 2:08.45.

Paced through 400m by former World University Games champion Angie Petty in a rapid 60 seconds, Greene held a 10m advantage from Kara Macdermid at the bell with Buscomb a further 10m adrift.

Yet the swift early pace coupled with the blustery conditions took their toll on Greene, the New Zealand 800m number one this season, in the latter stages and Buscomb timed her challenge to perfection to come within 0.24 of her lifetime best for the distance.

Greene was rewarded with a time of 2:09.21 in second with fast-finishing Rosa Twyford (2:12.09) completing the top three. 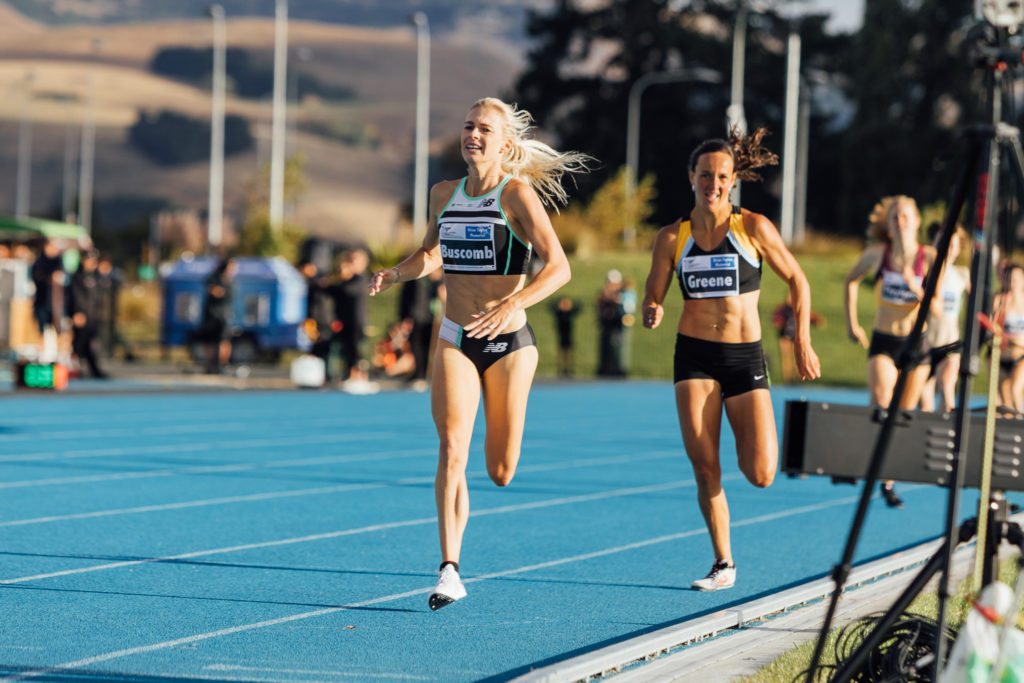 The New Zealand A selection team of Natasha Eady, Rosie Elliott, Georgia Hulls and Symone Tafuna’i claimed a comfortable win in the women’s 4x100m, clocking 45.57 to finish 1.05 seconds clear of a New Zealand B selection team.

For all the results from the 2021 International Track Meet please click on the links below: